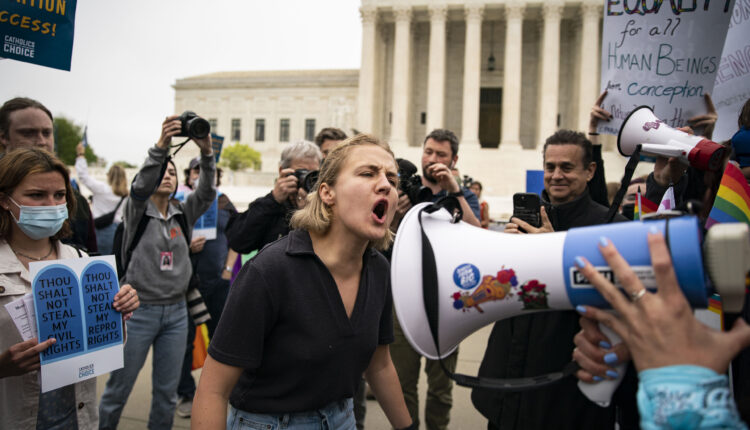 For an eventuality that’s been forecast and fought over for decades, no one truly has any idea what would happen if the Supreme Court overturns Roe v. Wade.

It was fairly clear when the court heard arguments in December over whether Mississippi could ban most abortions after 15 weeks of pregnancy that at least five justices supported upholding Mississippi’s law. It also seemed likely that they favored going significantly further to chip away at the right to abortion that women have been guaranteed since Roe was decided in 1973.

A leaked draft opinion published by Politico on Monday night — itself a historic breach of the court’s top-secret deliberation process — simply suggests what those who have followed the debate closely already suspected: Roe and the 1992 case that upheld it, Planned Parenthood of Southeastern Pennsylvania v. Casey, were soon to be no more.

“Roe was egregiously wrong from the start. Its reasoning was exceptionally weak, and the decision has had damaging consequences,” says the draft opinion obtained by Politico and authored by Justice Samuel Alito. Politico said Alito was writing for a majority that includes Justices Clarence Thomas, Neil Gorsuch, Brett Kavanaugh, and Amy Coney Barrett, but not Chief Justice John Roberts.

Several caveats are in order here, even after the draft was confirmed as “authentic” by Roberts, who also said he has ordered an investigation into the source of the leak. First, draft opinions can and do change — majority opinions can even become minority ones. That’s what happened with the 2012 Affordable Care Act case — although the initial vote was to strike down the law as unconstitutional, a deal was eventually made to uphold the core of the ACA while making a key provision, the Medicaid expansion, optional for states. Those deliberations were detailed by Supreme Court reporter Joan Biskupic in her 2019 biography of Roberts, “The Chief.”

Even if the underlying votes don’t change, draft opinions are often changed significantly before they are released.

Also, the Supreme Court’s process is an iterative one: Justices circulate drafts back and forth and agree and disagree and edit. That’s why often there are multiple majority, dissenting, and concurring opinions surrounding a single case. As Roberts noted in his statement Tuesday, “Although the document described in yesterday’s report is authentic, it does not represent a decision by the Court or the final position of any member on the issues in the case.”

All of that said, however, it seems unlikely that any of the five justices on the draft decision to overturn Roe and Casey will change their minds on the threshold issue.

Which leads to the next question: What’s next?

Substantively, the answer is obvious. A number of conservative states already have anti-abortion laws on the books that will be triggered if the court overturns Roe. Red states lacking so-called trigger bans likely will rush to pass as many prohibitions and restrictions as they can. Blue states probably will attempt to make abortion more available to travelers from other states.

But politically the impact is murkier. Will women rise up and protest, as when President Donald Trump was elected, and then drive the midterm vote in November toward Democrats? Or will the reaction be more as it has been in Texas, where, as The Washington Post pointed out this week, “Republicans have paid no apparent political price for banning abortion after cardiac activity is detected, around six weeks of pregnancy.” The Supreme Court has so far declined to halt the Texas law, even though it directly contravenes Roe, which technically remains the law of the land until an opinion overturning it is issued.

The leak alone has changed the tenor of the debate.

“It concerns me a great deal that we’re going to, after 50 years, decide a woman does not have the right to choose,” said President Joe Biden, who has mostly avoided the touchy issue since becoming president. “If this decision holds, it’s really quite a radical decision.” (Biden did, for apparently the first time in his presidency, use the actual word “abortion” in his prepared statement and responses to reporters Tuesday.)

“My intention is for the Senate to hold a vote on legislation to codify the right to abortion,” said Senate Majority Leader Chuck Schumer on the floor Tuesday morning. “Every American is going to see on which side every senator stands.”

Schumer has so far resisted holding such a vote, mainly because not every Democrat would necessarily vote for such a bill, which could have implications broader than a reinstatement of Roe.

Republicans are, so far, downplaying the potential political impact. Senate Minority Leader Mitch McConnell, who largely is responsible for adding the justices to the court who would make Roe’s overturn possible, focused his reaction on the leak. “Last night’s stunning breach was an attack on the independence of the Supreme Court,” he said in a statement.

But even GOP operatives say they are not that concerned about a voter backlash. “Consider me highly skeptical that the SCOTUS decision is going to have a meaningful impact on the midterms,” tweeted Brendan Buck, a GOP communications consultant and former top aide to House Speakers John Boehner and Paul Ryan.

Abortion opponents are among those celebrating, although even they realize this is not the final word. “If this opinion is adopted … the chaos of an erroneously decided decision 50 years ago that has had such a profoundly negative impact on our culture and all women, and men, would finally be set right,” tweeted Jeanne Mancini, president of the anti-abortion group March for Life.

One of many wild cards in all this is the role major corporations are playing in facilitating abortion for employees and their dependents. Some large companies, including Amazon, Citigroup, Yelp, Lyft, and Uber, are specifically creating benefits to help their workers obtain and pay for reproductive health care.

For the moment, both sides appear galvanized by the likely earthquake to come; abortion rights proponents and opponents have been crowding the sidewalk in front of the Supreme Court and the Capitol. But politically, this is going to be a marathon, not a sprint.

A final, official decision from the court is expected by the end of June.

HealthBent, a regular feature of Kaiser Health News, offers insight and analysis of policies and politics from KHN’s chief Washington correspondent, Julie Rovner, who has covered health care for more than 30 years.