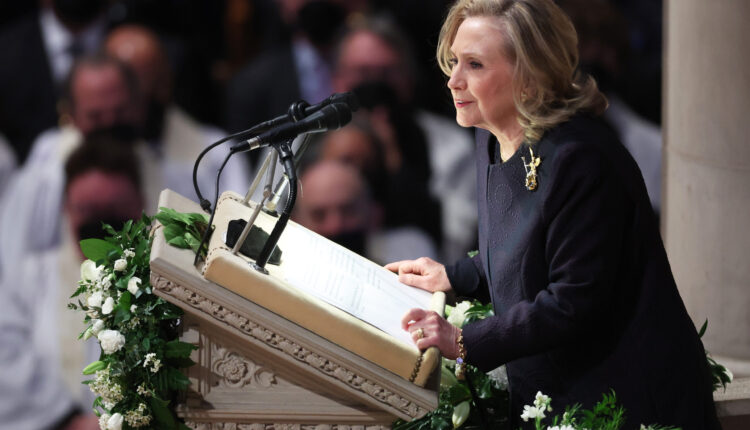 Just as it’s a waste of time for Republicans to refight the results of the 2020 election, it certainly does no good for anti-MAGAs to refight what happened in the previous race. Nevertheless, I wince on occasion when I contemplate how our country would’ve been far better served if the popular vote winner in 2016 had ascended to the Oval Office.

Last Wednesday was one such occasion, truly wince-worthy.

While eulogizing Madeleine Albright at Washington’s National Cathedral, I was struck by these passages:

“Freedom can’t be taken for granted. Democracy must be defended. Peace must be won. And there is no time to waste doing any of that…(Albright) continued to issue blunt warnings about the dangers posed by authoritarianism and fascism with undeniable moral clarity … She talked about the importance of what President Biden is doing to rally the world against Putin’s horrific invasion of Ukraine and the urgent work of defending democracy at home and around the world. She knew better than most and she warned us in her book on fascism, that yes, it can happen here, and time and courage are of the essence … This must be a season of action. And yes, once again, we must heed the wisdom of her life and the cause of her public service. Stand up to dictators and demagogues, from the battlefields of Ukraine, to the halls of our own capital. Defend democracy at home, just as vigorously as we do abroad.”

Albright indeed warned us about encroaching fascism – in 2018, she said: “There are conditions out there that provide the petri dish for something terrible to happen” – but let’s not forget that back when it mattered most, with America at a crossroads,

Hillary Clinton warned us, over and over, about what would happen if the opposition’s demagogue was handed the reins of power. She had faults as a candidate, but ultimately it was not her fault that a small but fatal share of clueless, oblivious, feckless, or willfully deaf Americans stayed home in the handful of states that swung the antiquated Electoral College.

She got it right during the 2016 debates when she spoke directly to Trump: “(Putin) would rather have a puppet as president. (We know) that the Russians have engaged in cyberattacks against the United States of America, that you encouraged espionage against our people, that you are willing to spout the Putin line, sign up for his wish list, break up NATO, do whatever he wants to do. And that you continue to get help from him, because he has a very clear favorite in this race.”

She got it right in 2016 when she warned about the MAGA movement’s animosity toward people of color: “Trump is reinforcing harmful stereotypes and offering a dog whistle to his most hateful supporters. It’s a disturbing preview of what kind of president he’d be.”

She got it right in 2016 when she warned that the GOP would target gay people all over again, regardless of “the progress that we fought for, that many of you were on the front lines for. It may not be as secure as we once expected.”

She got it right in a 2016 speech when she warned that “a fringe element has effectively taken over the Republican Party. And this is part of a broader story – the rising tide of hardline, right-wing nationalism around the world…So no one should have any illusions about what’s really going on here.”

She got it right in 2016 when she warned about a fragile future for women’s reproductive rights: “The fact that our next president could appoint as many as three or four justices in the next four years (demonstrates) that we can’t take (those rights) for granted. Just consider Donald Trump, the Republicans’ presumptive nominee…He has pledged to appoint Supreme Court justices who would overturn Roe v. Wade…And that’s why this election is so important. The outcome of November’s contests is going to be a deciding factor in whether our elected officials and our courts defend or attack a woman’s right to health care for generations to come.”

She’s still getting it right, by the way. Last year she noted: “There is a plot against the country by people who truly want to turn the clock back. They believe that the progress we’ve made on all kinds of civil rights and human rights, the cultural changes that have taken place, are so deeply threatening that they want to stage a coup.”

If that coup is completed in 2024, don’t say that Hillary didn’t warn us.

As it turns 125, an embattled W.Pa. borough looks to the future