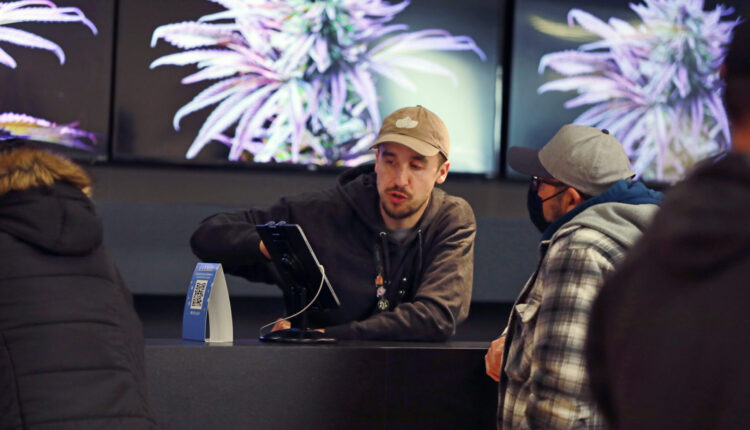 BLOOMFIELD, N.J. — If you’re shopping for cannabis at Rise dispensary in Bloomfield, the most you’ll shell out for an eighth is $70.

A short walk from the 8th Street PATH station in Manhattan, the highest price for an eighth at the new Housing Works Cannabis Co. dispensary is $60. At Rise, most eighths are $60 or more. At Housing Works, most are below $60.

The price differential in the two markets separated by a river — recreational cannabis sales in New Jersey launched in April 2022, in New York on Dec. 29 — has cannabis users wondering why they’re paying so high in the Garden State.

Officials with the New Jersey Cannabis Regulatory Commission, the agency that oversees the state’s medical and recreational cannabis industries, have conceded in the past that the price of marijuana remains high, but says that as more dispensaries open, that should change.

“New businesses are opening every month in both the medicinal and the adult-use markets, and as competition increases, prices will begin to fall,” Jeff Brown, the commission’s executive director, said in a statement to the New Jersey Monitor.

In an October meeting, Brown said that prices have increased due to inflation, but at a slower rate than prices of other goods.

“All these promises were broken in New Jersey,” said Chris Goldstein, a longtime cannabis activist working with the National Organization for the Reform of Marijuana Laws. “They said it was impossible to open with prices below $50 to $60 an eighth. But you look at New York, how they were able to launch with reasonable pricing, it was really surprising.”

When New Jersey’s industry launched nine months ago, the only places that could legally sell recreational cannabis were existing corporate medical marijuana facilities that received approval to sell adult-use weed also. Hundreds of microbusinesses and retailers have had applications approved by the state, but have yet to open. Some officials believe there will be a boom in mom-and-pop weed shops in April.

New Jersey’s first small business medical cannabis dispensary, Valley Wellness, opened in Raritan in early December. There still isn’t much of a price difference compared to corporate stores — an online menu shows eighths up to $65 — because they don’t have their own growing operation.

Scarpulla said the medical marijuana he uses is so expensive and access so limited that he still goes to the black and gray markets for better deals. Between sales and the tax exemption for medical patients, he doles out $60 an eighth for quality cannabis.

Some of his friends who don’t have access to underground dealers are left buying trim and shake — the leftover bits of weed not known for potency.

“Medical patients essentially scrape the bottom of the barrel because they know they need this medicine,” said Scarpulla, who has plans to work as general manager of a dispensary set to open in Somerset.

Brown attributed some of the high costs in New Jersey to indoor cultivation, which costs more than outdoor cultivation. Some former hemp farmers were among the first wave of cultivators in New York, and that could be keeping prices down on the other side of the Hudson, he said.

New Jersey’s recreational cannabis dispensaries did not respond to requests for comment.

Taxes aren’t the issue here. Under current law, recreational marijuana in New Jersey is subject to a 6.625% sales tax — which medical users no longer pay — and up to a 2% municipal tax. New York’s cannabis taxes are higher, at 13%, with 9% going to the state and 4% to the municipality.

New Jersey tacks on about $1.52 per ounce for its social equity fee (the cannabis commission is holding ongoing hearings on how to use that revenue).

Bill Caruso, who helped lay the groundwork for New Jersey’s law with New Jersey United for Marijuana Reform, doesn’t believe New York’s new market will steal many customers from New Jersey. Someone who lives in Jersey City but works and hangs out in New York, he said, might find it easier to shop there than in New Jersey.

“I think, ultimately, quality and convenience will trump differential in price,” he said. “If someone is already in Manhattan, they might think, ‘Yeah, this is better quality and it’s convenient, so I’m going to bring it home,’ but that person was probably doing that already.”

In the end, he thinks New Jersey’s expanded market will drive down the cost. But Goldstein hopes that New York’s prices will put enough pressure on New Jersey’s dispensaries to bring down the prices before more stores open, which could still take months.

Goldstein noted that most of New Jersey’s dispensaries were previously exclusively for medical marijuana patients, while New York has kept their medical and recreational stores separate. He believes that led to New Jersey patients paying more and having less access because dispensaries want to make money off recreational sales. The way New York has started its adult-use market, he said, protects the patients.

Scarpulla wondered if New York is going to “just continually out-do us.”

“There shouldn’t be a glaring reason why people should be risking getting arrested or getting in trouble to go through the black market or another state, because you might get pulled over,” he said. “There’s absolutely no need for that when we’re the Garden State.”

This story first appeared in the New Jersey Monitor, a sibling site of the .

In the Rockies, Human Activity Paves the Way for a Hybrid Bird Boom