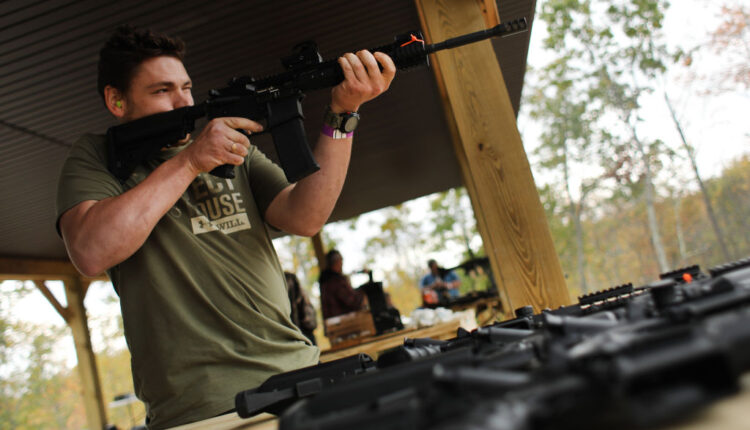 A man shoots AR-15 rifles and other weapons at a shooting range during the “Rod of Iron Freedom Festival” on October 12, 2019 in Greeley, Pa. (Photo by Spencer Platt/Getty Images).

Two acts of mass murder only days apart — 10 Black people at a supermarket in Buffalo, N.Y., on May 14, and 21 people, including 19 elementary school children in Uvalde, Texas, on May 24 — cry out for national reflection on the nature of American life.

What is it about us that causes two 18-year-old men from opposite ends of the country, each without any criminal record, to decide to kill innocent people—shoppers, teachers, children—unknown to them?

Including the most recent such crime, in Tulsa, Okla., there have been 12 shootings where four or more people have been killed in 2022, leaving 76 people dead. Then, last Saturday night, June 4, multiple shooters opened fire in the South Street area of Philadelphia, killing 3 people and wounding 11 others.

But this time, many Americans are not in a reflective mood. This time, Americans want Congress, in the words of President Joe Biden, to turn “this pain into action.”

This national mood for action crashes against the reality of legislative deadlock in Washington. Democrats in Congress for years have been advocating gun violence reduction measures, including universal background checks to close the loopholes in the current system, and limiting access to military-style assault weapons and high-capacity magazines.

But these measures might not even gain the votes of all Democrats in the Senate, let alone attain the 60-vote level necessary to overcome a certain Republican filibuster.

Republicans claim that such legislation threatens the rights of law-abiding citizens, including the right to bear arms embodied in the Second Amendment.

Our leaders have failed us on gun violence. Let’s take the power back | Opinion

To be clear, I strongly support these proposed measures, and I would be delighted if the Democratic Party managed at last to translate popular support into effective legislative action.

But I don’t expect that to happen. A bipartisan deal is being pursued now in Washington? I’ll believe it when I see it.

So, I suggest a new approach, one that admittedly does not address gun violence directly, but one that would work and would be a step in the right direction.

I propose taxing assault-style weapons and their ammunition and banning body armor.

An AR-15 rifle such as the ones used in Buffalo and Uvalde costs anywhere from $600 to $2,000. A substantial tax on these weapons used in both shootings, and on the high capacity magazines that allow firing with less time spent in reloading, would create a large fund. More than a million such rifles are manufactured in America every year and it is estimated that almost 20 million AR-15 style weapons are in circulation.

This fund could then be used both to provide greater security at schools and other sites and compensate families of victims of gun violence.

We may never see police accountability in the Texas school shooting. This is why | Opinion

Last week, former President Donald Trump spoke at the NRA convention in Texas, and he expressed genuine sorrow for the lives lost in these two episodes of violence. He proposed enhancing the security of schools as a response. He opposed the sort of gun violence reduction measures that Democrats favor.

Republicans who say they want to aid victims and provide more security never talk about how this is to be paid for. Why should taxpayers foot this bill? Let the people who enjoy these guns and their use pay the enormous social costs that they impose on the rest of us.

Furthermore, tax and spending programs can be designed so that they are not subject to a filibuster in the Senate. That is why Republicans in January 2017, were able to pass a budget resolution by a vote of 51 to 48 that would have allowed the repeal of Obamacare by a simple majority vote. Democrats could do the same with regard to a tax on weapons and ammunition.

Congress possesses both the power to regulate commerce and to tax and spend. So, let Congress act.

I know how paltry a tax seems in the face of such suffering, and Democrats are loath to change the subject from real gun violence reduction. But high taxes will discourage at least some sales and the American people will reward the Party that produces tangible action with regard to gun violence.

Certainly, safer schools and support for victims are good policies in themselves.

But there is one item that might be banned, even in the face of a filibuster. The shooter in Buffalo came equipped with body armor. That is why he was able to kill Aaron Salter, Jr., the courageous security guard who confronted him.  Salter, a retired police officer, fired at the shooter, but his bullets could not penetrate the armored vest the shooter wore.

The possession and use of body armor is already illegal under federal law for many convicted criminals. Some states go further, for example banning its use on school property. There should be a total federal ban on private use.

This ban might not pass the Senate. Unlike a tax, it would be subject to a filibuster. But at least the terms of debate would be changed. Body armor is not used in hunting. Law abiding citizens have no need for it. And, of course, the Second Amendment does not apply to it.

Perhaps 10 Republicans might be found to join in banning it.

Granted, mass shooters do not need body armor. The shooter in Uvalde did not have it. But 21 mass killers have used body armor since 1980, most in the last decade.

Dressing up in this kind of gear adds to the fantasy of invincibility and the self-image of the warrior. Maybe, without that last bit of inspiration, the Buffalo shooter would not have acted.

Body armor legislation has been proposed in the past. Now is the right time to bring a simple ban to a vote.

This tax and this ban would not directly prevent future mass killings. They are small steps. But they would reassure the American people that something effective can be done. We are not helpless. Our system is not entirely broken. And that, in addition to national reflection, is what is needed today.

Lehigh’s Second Half Rally Comes Up Just Short At No. 13 Arizona State