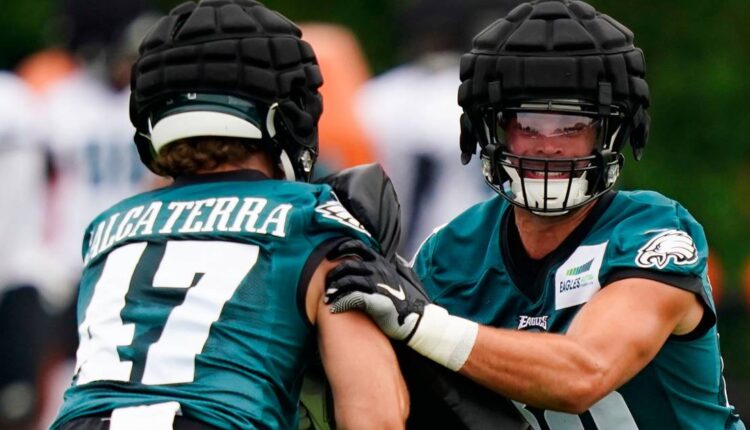 Health, science and the modern practice are everything in the NFL these days

The Eagles think training camp practices no longer than 90 minutes and resting starters most of the preseason will give them their best shot at returning to the Super Bowl.

That strategy got them to the playoffs last season, and it’s a straight steal from the defending Super Bowl champion Los Angeles Rams, who invented the modern practice.

Health is everything in the NFL these days, even at the expense of dropped passes, penalties, and general sloppiness in the first month of the 17-game season. That’s totally different than the summer of 2011 when Jason Kelce joined the Eagles at Lehigh University. Under Andy Reid, the Eagles took advantage of each and every day they were allowed to hit with shoulder pads on. They tackled, they bled, and they finished 8-8.

Remember that the Dream Team assembled the first couple weeks of camp at Lehigh with marquee free agents like Nnamdi Asomugha. The Eagles were coming back from the lockout. Kelce was a sixth-round pick out of Cincinnati.

“The way the league has gone, and you see this all over the place, there’s more sports science, there’s more research on players’ safety, keeping guys healthy,” Kelce said Friday after the second camp practice at the NovaCare Complex. “What’s the most important thing we’re trying to get out of practice really to be effective on game day? There’s a lot of people in this building who do numerous studies, GPS loads, a lot of different criteria to make sure they’re putting us in the best and optimal situation for the team and the individual. And I think that that has certainly has not just benefitted me but benefitted everybody. You can’t ignore the results. We were a very healthy team last year and hopefully that continues this year.”

The Eagles were anything but healthy when they won their only Super Bowl to cap the 2017 season. Key starters Jason Peters, Jordan Hicks, Chris Maragos, Darren Sproles and Carson Wentz were lost early and late that year. Training camp was much more of a grind than it was last season, the first under head coach Nick Sirianni and so far, this one.

Rules in the CBA are partly responsible for less contact at practices, but sports science has taken over. Kelce, 34, concedes the changes have helped extend his career and the streak of 122 consecutive games started.

Kelce conceded that if he was a rookie in this training camp format, he might not have enough chances to win a starting job as he did 11 years ago. So, don’t be surprised if the learning curves for first-round pick Jordan Davis and third-round linebacker Nakobe Dean, both from FBS champion Georgia, are a little longer than you’d like.

Kelce doubts there are enough reps for the young guys to distinguish themselves in this new age of sports training.

“Well, I don’t know,” Kelce said. “I think that’s going to be a per-person deal. If some guys need more reps they’re going to gravitate toward getting physical reps on the field. There are some guys who are really, really good at learning things mentally and taking it to the field. My rookie year I didn’t get a lot of physical reps. That was the lockout year. I didn’t have the offseason. I got the playbook the day before I showed up at training camp. Everybody’s going to kind of have their strengths and skill sets. Obviously, this schedule is certainly beneficial for older guys.”

Veteran receiver AJ Brown, though just 24, isn’t having trouble getting in sync with quarterback Jalen Hurts, who was anything but great Friday. Veteran pass rusher Haason Reddick is ready to roll.

For the Eagles to get to where they want to go, they must stay healthy and get significant contributions from Davis and Dean. Hopefully, they’re quick learners. Dean is supposed to be the ultimate quick study, meaning he learns fast.

The bottom line? It looks like the offense needs to dominate.

“We have to get better. In this city, it feels like every year the media thinks that we’re really good we end up being really crappy. And every year the media thinks we’re going to be crappy we end up being really good. So, I prefer not to look at what everybody thinks we look like on paper. The only way we’re going to be good this season is if we come out here and we work. Each and every one of us. But I do think that, from a players standpoint, I think we can be very good.”