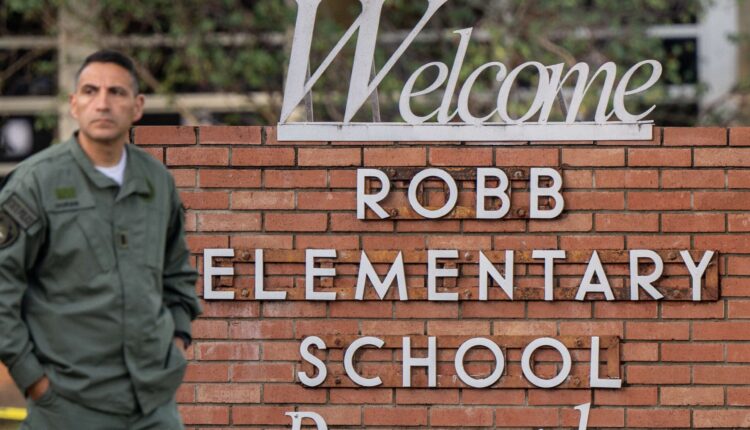 When the voices of 70 elementary school students flooded the speakers of Busch Stadium in St. Louis last week, I was haunted by the ghosts of my own childhood fears. Four days earlier, 19 children about the same age were murdered in their own classroom, along with two teachers, at Robb Elementary School in Texas.

As the students’ rendition of “God Bless America” echoed in the stadium, it no longer felt like I was in the land of the free. The melody seemed a chanted message that no matter how devastated we were about our murdered children, we could still be brought to our feet by any plea for heavenly blessings. I could feel my 8-year-old sister’s small frame beside me. I knew she was safe here with me, but what would happen when she returned to school?

As I stood in silence beside my sister, I felt an overwhelming need to protect her as I thought about the slaughter of May 24. One Uvalde girl in particular dominated my thoughts.

Miah Cerrillo, 11, covered herself in her friend’s blood and acted dead in order to survive the massacre. News anchors seemed obsessed and horrified at the idea of smearing a loved one’s blood across your body to avoid a bullet in an elementary classroom.

But what adults who went to school before Columbine don’t get is that this is a learned tactic. I know, because Uvalde is exactly what my friends and I prepared for in elementary school.

After the 1999 Columbine massacre, which left 13 dead, children couldn’t just attend school anymore. Survival training became part of the curriculum. Columbine happened two years before I was born, but I have lived in its shadow for 21 years.

Miah Cerrillo didn’t play dead out of instinct, I’m sure. This 11-year-old child must have learned it somewhere. This tactic, of using blood to play dead, also occurred in the 2012 mass shooting at Sandy Hook Elementary School.

Parents, wake up. Stop pretending like our children don’t know they could die when they leave the house every morning. If you think a child is too young to learn about other kids being murdered in their classrooms, you’re flat wrong. We learn it and we’re left to make sense of it on our own.

If Miah is anything like I was as a child, she was mentally prepared to take this desperate measure long before the shooter entered the building. Parents, what you don’t know is this: Your children are not only expecting to outwit a murderer, they are so hardened by reality they can carry out these strategies when others would shut down from shock.

This is no longer a question of if, but when. When will I need to be brave enough to see my best friend’s dead body and whisper goodbye as I face death?

As a kid, I never thought much about why someone would want us murdered. It was just a fact of life. I existed so someone wanted me to stop existing. The pillars of the American school system became: reading, writing, arithmetic and surviving a bullet to the head.

In high school, I listened to a podcast that would talk through school shootings and break the tragedies down. I wasn’t listening to them just to study history, but to make detailed mental notes on how to prepare. I was determined not to die cowering in a corner. If someone was going to murder me, I wanted them to look me in the eye as they took my life.

Enough with the public trauma | Opinion

I attended a tiny high school in Pilot Grove, Missouri, where I remember debating with my friends about if a hockey puck thrown at a shooter would hurt them enough, if our teachers should be armed with weapons and even if we could shoot the gunman if we disarmed them. It’s devastating to be a child running through hundreds of scenarios in your head and not being able to find a way to survive any of them.

If we flee out the window, the gunman may be waiting to pick us off, like the original plan of the Columbine shooting. This also destroys the idea of pulling the fire alarm so everyone runs away. If we do that, we may be the ones responsible for killing our friends. Does that make us the murderer?

The official FBI website gives advice on what to do if faced with an active shooter: Flee the scene, hide from the gunman or fight if necessary.

Well, fleeing never seemed to be an option. That took us to hide. Hiding is exactly what we were told not to do after Sandy Hook. Sitting ducks are too easy to kill. Still, hiding was always the tactic that wormed its way into my nightmares, perhaps from all the drills we ran through in elementary school.

Let’s move to Australia, where they confiscate weapons of mass murder | Dick Polman

I remember growing up and having recurring nightmares about hiding from men with guns. These happened almost every single night. Hide and seek. The catch? If you are found you are killed.

The one plan my friends and I had the most faith in?

Cover ourselves with the blood of one of our classmates and play dead. A hunter doesn’t shoot what’s already been killed. And it was abundantly clear to us that we were the prey.

Parents, wake up. Stop pretending like our children don’t know they could die when they leave the house every morning. If you think a child is too young to learn about other kids being murdered in their classrooms, you’re flat wrong. We learn it and we’re left to make sense of it on our own.

It’s not the children’s fault this country is letting them be murdered in the very places they learn simple addition – and increasingly, a grisly subtraction.

It’s our fault for letting them die.

Sam Bailey is a senior at Emporia State University in east central Kansas, majoring in Communication, and is a staffer on the student newspaper, the Bulletin. She wrote this piece for the Missouri Independent, a sibling site of the , where it first appeared.

Ranked Showdown Saturday at No. 19 Lehigh Hosts No. 5 Georgetown

Pa.’s $5 prison co-pay helps no one. Eliminate it | Opinion