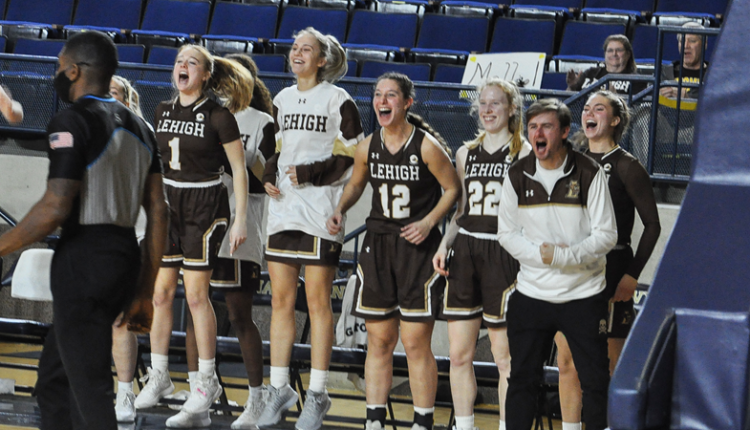 ANNAPOLIS, Md. – The Lehigh women’s basketball team ended the 2021-22 regular season on a high note, downing Navy 64-42 Wednesday evening at Alumni Hall. The Mountain Hawks (19-10, 11-7 PL) snap a three-game losing streak with the victory over the Midshipmen (8-20, 5-13 PL) and sweep the season series. Senior forward Emma Grothaus finished with nine points, most notably becoming the 21st player in program history to reach 1,000 career points after getting an and-1 layup to fall with 7:45 to play in the fourth quarter. Grothaus is just the seventh player in program history to record 1,000+ career points and 600+ career rebounds.

“I think she’s a little bit relieved (to get to 1,000 points), honestly,” said head coach Sue Troyan. “I know she would have loved to get there with her family in the stands, but I’m super excited for her. She means so much to this program and she’s been so consistent over the last four years. I’m glad she reached the milestone tonight so she can turn her focus onto the Patriot League Tournament on Monday. She’s accomplished a lot, both on and off the court over those last four years.”

— Lehigh Women’s Basketball (@LehighWBB) March 3, 2022 In addition to Grothaus’ milestone, sophomore guard Mackenzie Kramer had one of her own, with two 3-pointers, she passed Alex Ross ’10 for the most 3-pointers in a single -season at 95. That was a single-season record that was held for nearly 13 years.

“She (Kaylee) was awesome tonight,” Troyan said. “We talked a lot about how we wanted to get back to the basics on both ends of the floor tonight. I thought Kaylee really embraced that with her play, she really wanted the ball and was ready to shoot it with a ton of confidence. I think that confidence was exuding over to her teammates as well.”

Lehigh shot 37.5 percent (24-for-64) from the field with a total of seven 3-pointers, while the defense did its job limiting Navy’s points, holding the Mids to just 22.5 percent (16-for-71) from the field and 10.5 percent (2-for-19) from beyond-the-arc. The Mountain Hawks led for all but eight seconds early in the first quarter, leading by as many as 25 points in the fourth quarter to come away with the commanding victory.

The Mountain Hawks were dominant from the very beginning, leading by as many as nine points in the first frame to lead 19-10 heading into the second quarter. Lehigh stretched his lead out to 17 at 28-11 with 7:04 to go in the first half, eventually storming ahead by 19 points with 4:34 to go. The Mountain Hawks outscored Navy by five points to lead 37-23 heading into the locker room. Lehigh shot a cool 39.5 percent (15-for-38) from the field in the first half, with nine points from Kramer and eight from Hottinger to lead the way.

Defensively in the third quarter, the Mountain Hawks kept their foot on the gas pedal, allowing Navy just seven points in the stanza, as the Mids shot 17.6 percent (3-for-17) from the floor in the third. Lehigh led by 17 going into the final 10 minutes, keeping a firm grasp of a 47-30 lead.

Lehigh stretched his lead out to 22 points to open the fourth quarter, leading 52-30 with 8:43 to go following a 3-pointer from Kramer, her record-breaking 95th of the season. The Mountain Hawks never trailed by less than 20 points in the fourth quarter to run away with the 64-42 win at Annapolis.

The Mountain Hawks were efficient in both getting to the foul line and converting on their free throw shots, shooting 81.8 percent (9-for-11) from the charity stripe.

Lehigh forced Navy turnovers on six steals with six blocks as well. The Mountain Hawks turned the ball over 16 times in the win. Lehigh finished the contest with the edge in points from turnovers (13-8), points in the paint (28-18), points from fast breaks (15-5) and bench points (23-9). It also out-rebounded Navy, 52-45.

“We talked about our four steps to win another Patriot League Championship and this was step one, getting a win here at Navy,” said Troyan. “I thought we had our two best practices of the season this week leading up to this game and I think we’re starting to see Frannie (Hottinger) to come back to her old self, which is going to be really important for us. I thought we practiced really well and we thought this game was really important in setting the tone and getting back to playing Lehigh Basketball and we did that tonight.”

The postseason gets officially underway Monday as fifth-seeded Lehigh visits fourth-seeded Bucknell at Sojka Pavilion in the Patriot League quarterfinal round. Tip-off time is still to be determined, but the contest will be streamed live on ESPN+ (subscription required) and aired live on Fox Sports Radio 94.7 FM and 1230 AM in Easton. The game will be a rematch of last year’s Patriot League semifinal in Lewisburg where the Mountain Hawks topped the previously unbeaten Bison, 63-54 en route to the program’s fourth Patriot League title.

Higher education innovation, statewide investment are the keys to growth in Pa. | Opinion