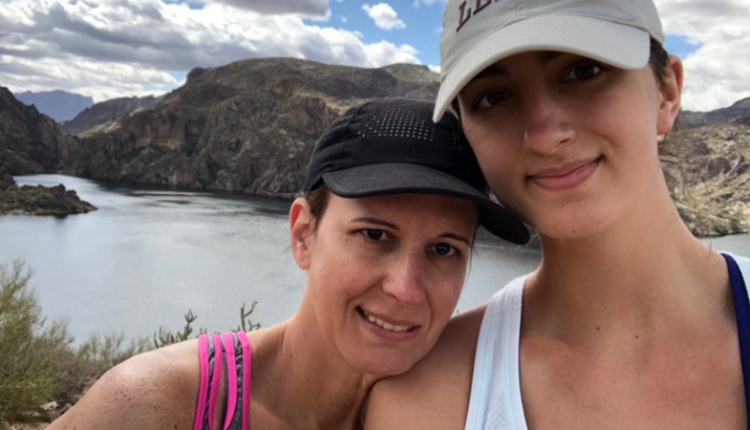 January 3, 2021 what the day it happened. The Mountain Hawks were hosting archrival Lafayette in their second game of the season.

“She sent me a gameday text on January 3 and I think she watched a minute or two of the game,” said Emma. “Then I don’t know what happened. It was really fast. I was playing Lafayette on our home court when it was happening. She had an autoimmune disorder; when I was younger, she was in the hospital for a long time.”

Postgame, Emma would usually get a text from her mom.

But this time, it didn’t come.

“I saw a text from my dad, then I saw phone calls from my dad and uncle, which I knew was weird,” she said. “That shouldn’t have happened, so I called my dad and the tone in his voice was just very distinct – a tone that, you know, wrenches your heart.

“She was in the hospital unresponsive on a ventilator,” Grothaus continued. “I was able to FaceTime her from Stabler after my game and say goodbye.”

Emma Grothaus faced the unimaginable at the start of the 2021 season, losing her mother, but she found the strength to return to her team — her mother would have wanted her to — and lead @LehighWBB to the @PatriotLeague [email protected] | @espnW | @suetroyan | @LehighU pic.twitter.com/7LvRtSStxQ

“It will be hard, but I know I’ll have a lot of support.”

That support has helped Grothaus get through an unimaginable time.

“My mom and I were really close, especially with basketball as a big part of my life,” said Grothaus. “She was always there, driving me to every practice. It was really special. She was the biggest supporter and always wanted the best for me.”

Erica was a former Division III college basketball player herself.

“Now that she’s not here, it’s been a really big growing challenge in the past year.”

After Emma’s mother’s passing, the entire team wasn’t sure it wanted to continue its season.

“It was really hard when Emma went home because I think they all wanted to leave at that point… to be quite honest,” said Lehigh head coach Sue Troyan. “When something that sudden happens, the immediate response from our team was wanting to be home with family.

“If we had gone home at that point, we probably wouldn’t have come back and the season would have been over,” Troyan continued. “Could we gut through? And if and when Emma wants to come back, we have a program here, a family here, basketball here for her to come back to.”

That’s exactly what Emma’s teammates did.

“I was home for about a week, maybe 10 days, then I came back because I knew my mom would want me to,” she said. “My dad was telling me to get back to it.”

Naturally, Grothaus was glad to be back around the sport, and the people, she loves.

“Being around my team again when I came back was hard at first because you know everyone knows what just happened, but it’s hard to talk about and no one knows how to talk about that [topic] with someone,” said Grothaus. “But just being around them, no matter the situation, helped. Everyone around me wanted the best for me.”

Among those was classmate Clair Steele.

“I just wanted Emma to know that I was there for her in any way possible and would be there no matter what she was feeling,” said Steele. “I tried to be supportive as possible while also making her feel as normal as possible. I wanted to make sure that she never felt alone and that I was always there for her to lean on if she needed it.”

Grothaus could feel that love and support, which meant (and continues to mean) the world to her.

“They helped me through the worst times on that day and saw everything that happened (after that January 3 game),” she said. “That’s something I think about to this day. They really saw me when that happened. They were there.”

One teammate, senior captain Mariah Sexe, could relate to what Emma was going through. Sexe lost her mom to cancer two years prior.

“Mariah’s situation was a little bit different; she knew it had gotten to a point where her mom was going to pass,” said Troyan. “There was time to prepare, and get her home to see and spend time with her mom. That was very different than Emma’s situation with it being so sudden, but I think the fact that Mariah was there as support was a real benefit to Emma .”

Troyan can also relate, having lost her mom at a young age.

“When Emma went home, we didn’t know if she would come back,” said Troyan. “We didn’t talk basketball. The priority was to get her home and spend time with her family. When she made the decision to come back, it was in large part because of the family at Lehigh.” The Mountain Hawks’ family had a deep bond to begin with, but it has only grown even stronger.

“Emma’s strength was (and is) incredibly admirable,” said Steele. “She was able to channel a certain energy from this devastating situation in a way that allowed her to play with even more heart, grit, love and strength than before. It showed how much she loved her mom and also how much she loves our team .”

“I know basketball was a driving force for Emma,” Troyan said. “She wanted to honor her mom with a championship… and I thought she did that with her play.”

Grothaus’ play led to being named Patriot League Tournament MVP. The Mountain Hawks beat Holy Cross, Bucknell and Boston University in the postseason to win the title and advance to the NCAA Tournament.

After returning to Bethlehem following her time home, Grothaus would think about her mom all the time, including before every game. But during game play, she’d be focused on the task at hand (which also made basketball an escape).

“Perspective definitely helped me during games,” she said. “The perspective of basketball and life now is completely different. I put a lot of pressure on myself before all this happened. Basketball is important and you want to do your best, you want your team to win, but now before a game, I don’t have those same nerves.

“You just go out there and can compete with a clearer mind.”

Grothaus tries to embody the things others have said about her mom.

“If you’re down 10 points, that’s nothing in the scheme of everything and you can just stay calm and make your run,” she said.

In the case of last year’s Patriot League Championship Game, Boston University pulled within three with 4:22 remaining, but the Mountain Hawks immediately staged a 10-0 run to go ahead by 13, all but clinching the game, and title.

“Within six weeks of Emma’s mom passing, we had two of our players lose a grandparent,” said Troyan. “I often said we had three angels playing with us through the tournament looking over us. For them, basketball became really important though, too, in terms of something they could focus their attention on. “Basketball was actually the thing that kept the team together and gave them a release.”

“Coach Troyan has been really amazing this whole year and I am truly grateful I chose Lehigh,” said Grothaus. “My mom really wanted me to go here. And in the end, it paid off. The support I’ve had, and will have, for the rest of my life is truly amazing. Whether it’s my teammates or the coaching staff, I know they’ll always be here for me the rest of my life.”

Steele admits they were playing for much more than themselves through last season’s run.

“Over the years, Emma’s family has become an extended family of mine,” she said. “Erica was always so supportive of Emma, ​​me, our entire team, and always brought such a positive light and energy. Last season really showed how life is so much bigger than basketball. I miss Erica so much; she inspired myself and the whole team to play with so much heart, grit and love for one another last season and still today. It brought a new level of selflessness and love to the team.”

One photo from last year’s Patriot League Championship Game, when Emma was named the tournament’s MVP, sums up her Lehigh experience.

“It’s not a photo of me, but it’s a photo of all my teammates,” she said. “They were genuinely so excited for me and that’s something I feel so special to be around – teammates and a group of girls who really want the best for everyone. That photo gives me so much warmth when I see it.”

As Steele said, “Watching a teammate lose a parent and still have the strength to come back and visit such an integral part of the team inspired us to play for Emma and her family.

“We play for Erica every game.”

“The hardest things in the past year have definitely been those life moments,” said Grothaus. “The first game of the season, securing my summer internship, or just playing basketball without her, is really hard.

“She would just be really supportive every day, which is something that only moms can do.”

Grothaus has had to grow and become more independent.

“We’ve talked a lot about how sometimes, when you’re challenged at a younger age, it forces you to grow up a little bit quicker,” said Troyan. “And I think we’ve seen some of that. I admire her maturity in terms of how she’s been able to manage all the other things in her life when something like this happened to her.”

Many call Emma a shadow of her mother.

“She was on the quiet side, but also very inclusive with everyone she was around,” said Grothaus. “Everyone just loved being around her and loved her energy.”

Erica was a special education teacher, who as Emma said, “really loved putting everyone before her.” Today, Emma is an amazing embodiment of her mom. “Emma is incredibly thoughtful, incredibly hard-working and is one of the strongest leaders we have in our program,” said Troyan. “A big part of that is how she’s put together in terms of her humility, competitiveness, her desire for success and her care for people.

“Her ability to connect with each one of our kids and take time to do that is probably her biggest strength,” Troyan continued. “On the court, she leads by example in terms of her competitiveness, her desire to be the best and her desire to help others come along to help us be our best.”

Thirteen months after that tragic day, Saturday’s Senior Night in Stabler Arena will be especially emotional. There’s no doubt Erica Grothaus will be on everyone’s minds, and will be there in spirit.

“Every day definitely looks different,” said Emma. “There are good days and bad days, but every life event is going to be hard. Thinking of her helps all the time.

“I don’t know if I could put into words how proud she would be of me.”

Bullies understand one language. The U.S., West must speak with one voice | Friday Morning Coffee