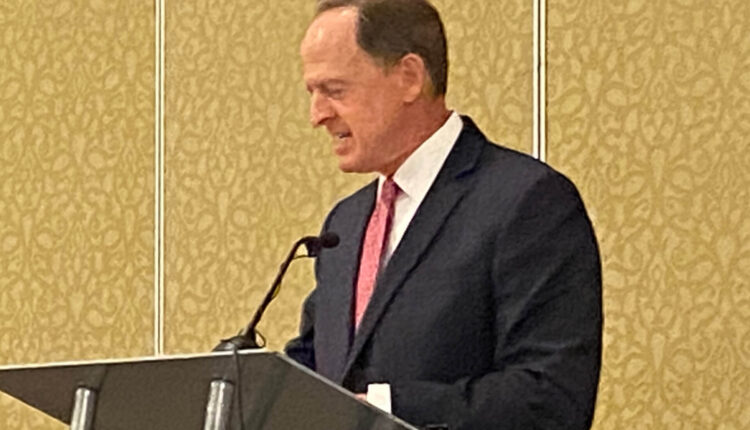 U.S. Sen Pat Toomey, R-Pa., who’s retiring at year’s end, gave his valedictory remarks during a speech on the Senate floor on Thursday afternoon. U.S. Sen.-elect John Fetterman, D-Pa., will fill the Lehigh Valley lawmaker’s seat during the next Congress.

Here are excerpts of Toomey’s remarks, which find Toomey reflecting on his relationship with U.S. Sen. Bob Casey D-Pa., and what he believes is his greatest accomplishment in office. The transcription of his remarks has been lightly edited for clarity and content.

“And I say it all the time. It’ll always be true. Representing Pennsylvania in the United States Senate for these 12 years has been the greatest honor of my professional life. And I’ll always be enormously grateful to the wonderful people of this great state,” Toomey said.

On the future of the GOP:

“For my Republican colleagues, let me just say, our party can’t be about or beholden to any one man. We’re much bigger than that. Our party is much bigger than that. We are the political representation of this huge center right coalition across America,” Toomey said. “On a good day, that’s more than half of Americans.

“And I hope we resist the temptation to adopt the protectionist nativist isolationist redistributive policies that some are suggesting we embrace. I think those are inconsistent with the core values of a majority of the people in this coalition. More important, I think those ideas lead to bad outcomes for our country,” he continued.

Toomey also noted that “in the hierarchy of political values, freedom is first for me.

“I think the real purpose of government is to secure the blessings of liberty. And government too often is the source of restrictions on our freedom instead. But in this category of defending and advancing personal freedom, my focus has tended to be the economic realm.

“Economic freedom is a fundamental aspect of personal freedom. There is a well-documented high correlation between the society’s economic freedom and the level of prosperity and the standard of living of the people in that society.

” … So you probably won’t be surprised to learn that I think my biggest legislative accomplishment was that opportunity,” to work on those issues, he said.

“Speaking of which, let me say a word about my colleague, Bob Casey. You know, I don’t think you could ask for a more collegial, thoughtful colleague than the fella that shares the senatorial responsibilities with me for Pennsylvania,” Toomey said.“Fact is, we cancel each other’s vote out almost every time. That is a true fact.

“… But we’ve also worked together when we could and one of the areas where we had just tremendous success is filling vacancies on the federal bench in Pennsylvania. In fact, Senator Casey, according to the last count that I have, you and I, working together these last 12 years, got 33 federal judges confirmed to the bench in Pennsylvania.

“Now that happens because we have … great staff work happening. We have volunteers who do a wonderful job of vetting candidates across our Commonwealth. But it also happens because Bob and I wanted to get this job done so that the people of Pennsylvania could have justice … So Senator Casey, I appreciate the great working relationship we have had,” Toomey said.

Lehigh’s Falls to No. 22 Wisconsin After Holding Halftime Lead