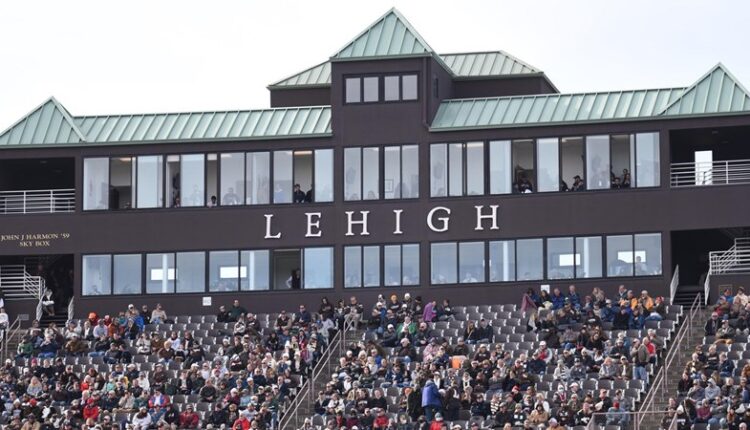 BETHLEHEM, Pa. – As Lehigh prepares to open its spring practice segment, head coach Tom Gilmore has announced the addition of three new members to the Mountain Hawks’ coaching staff. Mike Moyseenko and Wisly Desire join Lehigh’s offensive staff, while Hunter English moves up to a full-time position on the defensive side of the ball after serving in a volunteer/quality control role the last two seasons.

Moyseenko will coach Lehigh’s running backs, and will serve as passing game coordinator. Desire will serve as tight ends coach, and English will be the assistant defensive line coach.

Moyseenko comes to Lehigh following four seasons at the University of Connecticut, where he began as a quality control coach before briefly overseeing the running backs and spent the last three years as the Huskies’ quarterbacks coach.

Before his stint at UConn, Moyseenko spent five years at Towson University. He spent the last four of those years as the wide receivers coach after serving as the offensive quality control coach at Towson during the 2013 season.

Prior to his time at Towson, Moyseenko served as the wide receivers coach at Shepherd University in Shepherdstown, W.Va.

From 2008-2010, he served as the offensive coordinator for the Baltimore Mariners of the American Indoor Football Association with the Mariners posting a perfect 16-0 record on the way to winning the AIFA Championship in 2010. Moyseenko spent the 2011 season as the quarterbacks coach for Good Counsel High School in Olney, Md., where his team won a WCAC championship and finished the year ranked fourth in the nation.

Moyseenko was a walk-on quarterback at the University of Maryland and worked with the offensive scout team during the 2003 and 2004 seasons. He finished his final two years as an undergrad working as a student assistant for the Terrapins.

Moyseenko earned his bachelor’s degree in biology from Maryland in 2007.

Desire comes to Lehigh after spending the 2021 season as the offensive line coach and run game coordinator at Tusculum University.

Prior to Tusculum, Desire spent two seasons on head coach Butch Davis’ staff at Florida International University, where he worked with the offensive line during the 2020 season. In 2019, Desire worked with the defensive line and was part of a staff that upset crosstown foe Miami and earned a bid to the Camellia Bowl.

Desire was an offensive lineman at Jacksonville University from 2009-2013, where he helped the Dolphins attain a top 25 national ranking in 2010 with one of the top offenses in the nation.

English enters his third season on Lehigh’s coaching staff. English will assist with Lehigh’s defensive line in 2022 after spending his first two seasons as a defensive quality control assistant.

English originally came to Lehigh following four seasons on the coaching staff at his alma mater, Guilford College. He coached the safeties for three seasons before shifting over to coaching the linebackers in his final season at Guilford. English also served as defensive coordinator and primary defensive play caller in his final three seasons and coordinated special teams in his final season as well. He mentored six players to All-Old Dominion Athletic Conference honors and coached one All-American.

As a student-athlete at Guilford, English tallied 216 tackles (132 solo), including 3.5 sacks, forced two fumbles, and picked off three passes. He was a two-time All-ODAC performer, earning third-team honors in 2012 and a second-team nod in 2013.

The Greensboro, NC native was a triple major at Guilford earning degrees in psychology, sociology/anthropology, and criminal justice. He was named to Guilford’s Student-Athlete Honor Roll seven times and was also a dean’s list student. English earned Academic All-ODAC honors during the 2015-16 school year.

Riding the momentum of a three-game winning streak to end the 2021 season, Lehigh will open its 15-practice spring segment Friday morning, after Thursday’s scheduled practice was postponed due to inclement weather. Spring practice will conclude with the annual Brown and White Spring Game on Saturday, April 23 at Goodman Stadium. Lehigh’s 2022 season opener at Villanova was recently moved to Friday, Sept 2.