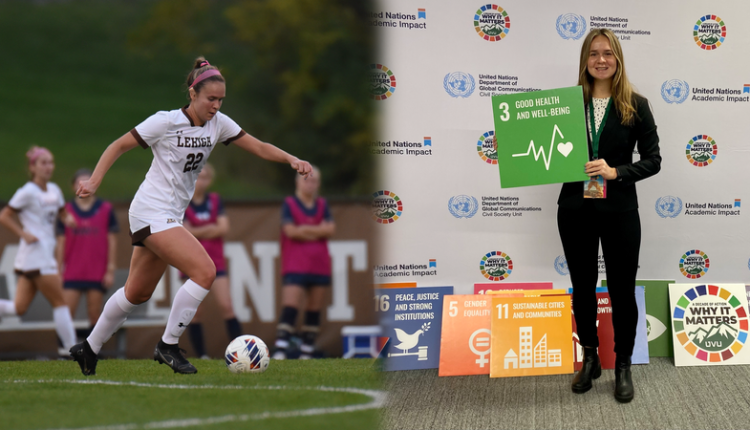 From the UN to Bethlehem: Murphy Makes Her Mark

By Mari Ruggeri ’23 with contributions from Morgan Weindel

BETHLEHEM, Pa. – Lehigh women’s soccer senior midfielder Mattie Murphy has continually proven herself this season as both an athlete and a student.

At the beginning of October, Murphy traveled to Utah to present research from her 2021 summer internship. The same day that she returned from her trip, Murphy played in the Mountain Hawks game against Navy. Murphy’s overall performance in the game resulted in her subsequently earning the Patriot League Midfielder of the Week award.

“I wasn’t expecting to do that well in the game, I was running off an hour of sleep,” Murphy said. “I think I just had so much adrenaline and was still so pumped up from everything that had already happened and I just carried that into the game and it worked.”

Murphy’s internship was organized through Lehigh’s Iacocca International Internship Program. During the summer of 2021, Murphy virtually participated in the experience where she worked on COVID research for a university in Santiago, Chile. The main purpose of Murphy’s internship was performing data analysis where her tasks included characterizing inconclusive COVID test results with the goal of improving overall test efficiency.

In the week leading up to the Navy game, Murphy traveled across the country to present her findings at a United Nations Conference on sustainable development goals. Murphy left Utah on Thursday night and arrived back to Bethlehem on Friday morning. Just a few hours later, Murphy was on the field ready to face Navy.

In the 79th minute, Murphy scored the game-winning goal against Navy, securing Lehigh’s first win against Midshipmen since 2011.

“I think Mattie knew what the assignment was and didn’t try to do too much and just took care of her role and again her goal was great,” head coach Lauren Calabrese said. “It was emblematic of what our style of play is, which is connecting, passing and finding open space.”

The last game of the regular season was Oct. 26 against Bucknell. Prior to the game, Murphy acknowledged that Bucknell was one of their toughest opponents so far this season. Since the Bison knocked Lehigh out of the Patriot League Tournament last season, the Mountain Hawks were playing to win.

“I think that we’ve been able to work through all of these challenges and we’re definitely peaking at the right time as a team going into the postseason,” Murphy said.

Calabrese has coached Murphy since she was a first-year. She says Murphy has always been consistent and brings stability in the midfield.

“The majority of college soccer is figuring out how to apply your skill set within the team framework,” Calabrese said. “I think it’s been really rewarding to see her do that.”

A 4-0 win against Navy in the quarterfinals of the Patriot League Tournament on Sunday sent the Mountain Hawks into the semifinals Thursday at No. 1 seed Army West Point. Game time is 6 pm with streaming on ESPN+.

Lehigh opened up league play against Army on Sept. 16. where the Mountain Hawks fell 1-0 following an early Black Knights’ goal in the sixth minute.

If the Mountain Hawks win on Thursday, they will advance to the Patriot League Championship on Sunday, Nov. 6, which will be held at the winner of the Boston University vs. Bucknell game. The championship game is set for 2 pm and will be televised on CBS Sports Network.

Journalists Cut Through the Noise, From Open Enrollment to Magic Mushrooms

In Pgh, Obama rallies Dems for Fetterman; Election ‘requires every single one of us to do our part’