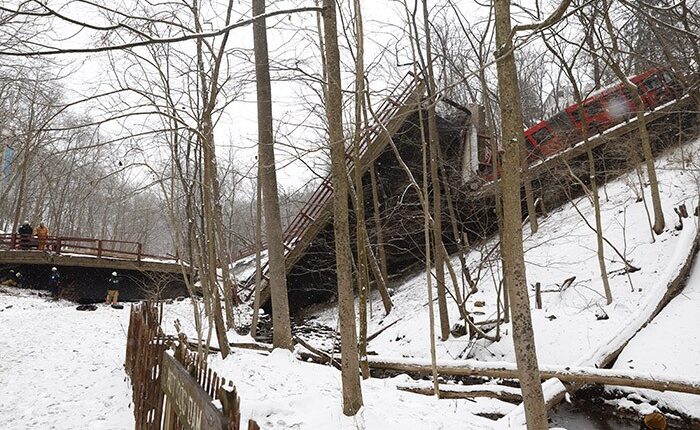 While prominent Pittsburgh officials have commented on PennDOT’s new renderings of the Fern Hollow Bridge, residents who live near the bridge have taken to social media to voice their suggestions.

Renderings for the new bridge, which is being replaced after the original collapsed on Jan. 28, were released on March 8, and have garnered critiques from multiple groups and officials, including feedback from the city’s Art Commission on the aesthetics of the design, described by some as resembling a “highway overpass,” according to WESA-FM.

On March 10, City Controller Michael Lamb asked PennDOT, which is leading the project, to “pause” the design to get more input into the space needed for non-motorized users, according to the Pittsburgh Post-Gazette. The push to expedite the project, which is expected to begin in April, has, thus far, meant a lack of input from the general public on the project’s design and development.

This has not, however, stopped people who live near the site of the collapsed bridge from offering their opinions to the public.

Wilkinsburg resident Gabrielle Marsden drew her own suggested layout for the bridge and posted it in several neighborhood Facebook groups to solicit feedback.

“I am very, very familiar with this area, and I believe that many might not be,” Marsden tells Pittsburgh City Paper via Facebook message. “As far as I am concerned, that bridge gets a lot of non-motorized traffic, and I want to make more people understand everything that is at stake.” Marsden said she feels strongly that bicycle and pedestrian traffic need their own dedicated lanes and would like designers to consider adding crosswalks and speed bumps where appropriate and possible.

Although PennDOT has said they plan to keep the new bridge the same length and width as the previous bridge, Marsden feels everyone’s needs could be accommodated if the new bridge were four feet wider than the PennDOT cross section, at 68 feet.

There are also more formal efforts underway to open a dialogue between communities near Fern Hollow and the powers that be.

“We’re planning just an informational meeting with the Regent Square Civic Association and representatives from the city, both the Department of Mobility and Infrastructure as well as our councilman’s office and Public Safety,” Jim Lenkner of the Greater Park Place Neighborhood Association told Pittsburgh City Paper.

Park Place is a neighborhood on the South Braddock Avenue side of Fern Hollow.

“We really didn’t initially think of this as a design meeting,” Lenkner added. “That wasn’t our goal. Our goal was just to get information about the status of the project and the status of our neighborhood with respect to city services during the two years or so of [bridge] construction.”

Now that PennDOT has released draft renderings, Lenkner said the group now looks forward to an opportunity to proactively share their thoughts on the Fern Hollow Bridge project.

“The first task was to get a bridge built. Well, that’s not really enough,” Lenkner said. “We would like to get the best bridge we can get built.”

How an app is helping Pgh residents avoid dodgy infrastructure

To that end, Wilkinsburg resident and public transit advocate Laura Wiens identifies several other concerns pertaining to building a better bridge, posting on the Park Place Neighborhood Facebook page that the previous bridge “had congestion during rush hour on the outbound side, that cyclists were funneled into traffic, that the sidewalks were too narrow to accommodate a person with a stroller or wheelchair, that crossing the street by the bridge was like playing Frogger, that people drive really fast on Forbes, both ways, but particularly on the inbound side— and to suggest that those design flaws be remedied by the new bridge, not be exacerbated by the new implementation.”

Wiens told City Paper that she wants to challenge the idea that community input is an inconvenience to the bridge development process.

“If we don’t fix those problems during the rebuild,” Wiens continued on Facebook, “we will live with those issues forever.”

Reparations are possible — they happened for Asian Americans | Opinion