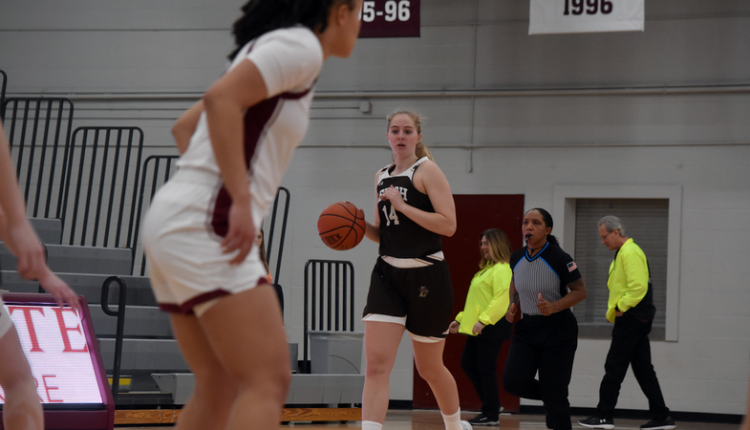 Fourth Quarter the Difference as Lehigh Falls to Colgate

HAMILTON, NY – The Lehigh women’s basketball team engaged in a hard-fought battle against Colgate, but came up a little short in Hamilton, falling 69-59 to the Raiders Monday night.

“I thought Colgate came out with a ton of energy,” said head coach Addie Micir. “They were making shots and playing with a lot of passion, so you have to give credit where credit’s due. I thought we showed some effort and some heart in spurts, but it wasn’t enough today.”

It was a hard-contested battle between both teams. There were 11 lead changes and three ties, with Lehigh leading for 6:30 p.m. and Colgate leading for 6:20 p.m.

Mackenzie Kramer knocked down three free throws after she was fouled with .3 seconds left to give Lehigh a 19-15 lead after one quarter.

The second quarter was an even matchup, with the teams heading into the half tied at 31

Frannie Hottinger tallied her seventh double-double of the season on Monday, finishing with a team-high of 24 points and 13 rebounds.

Mackenzie Kramer, who followed Hottinger with 19 of her own points, was the only other Lehigh player to finish in double figures.

“They made some really tough shots, and we didn’t make shots,” Micir said.”We’ve got to go and figure out a way to go and stop people, and sometimes it comes down to that too.”

Colgate’s Alexa Brodie had a team-high 13 points, and Morgan McMahon followed that with 10 of her own.

Before Monday’s game, Colgate was a team who had the second-best defense in the league, limiting their opponents to just 56.5 points per game. Lehigh was averaging 74.8 points but couldn’t get it going against a tough Raiders defense.

The Mountain Hawks return home on Jan.5 against Bucknell at 6 pm, which is the first of two straight home games. They will close that out with a game against Navy on Jan. 8 at 2 pm

“We’ve got to have a different approach, and an approach where we’re ready to play from the tip, and ready to go to play our style of basketball,” Micir said. “We’ll have the day off tomorrow and get back in the gym the next day, and really prep to defend, and score against Bucknell and focus on us.”

Weighing Risks of a Major Surgery: 7 Questions Older Americans Should Ask Their Surgeon