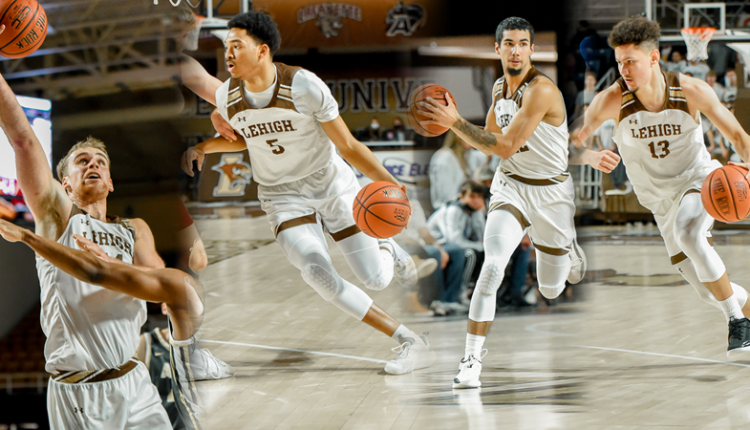 BETHLEHEM, Pa. – Following a strong regular season, four members of the Lehigh men’s basketball team were recognized with postseason awards, as announced by the Patriot League on Monday. Senior Nic Lynch and junior Evan Taylor were named third team All-League while Keith Higgins Jr. and Tyler Whitney-Sidney were named to the All-Rookie team. The honors mark the first in each of their respective careers.

Lynch has been playing his best as the season’s progressed, averaging 16.9 points and 7.1 rebounds over his last eight games. In the last week of the regular season, the Seattle native scored a career-high 30 points on Senior Night vs. American before posting his third double-double of the season at Lafayette Saturday. Overall, Lynch is averaging 10.0 points and 4.6 rebounds, 12.5 points and 5.8 boards in Patriot League play. Eight games ago, Lynch knocked down a pair of huge 3-pointers in the final five minutes of Lehigh’s improbable comeback win over Navy. He finished with 18 points in that game, and went on to score 24 points the following contest vs. Boston University. In league games, Lynch is second in the Patriot League in 3-point percentage, knocking down 25-of-50 (50.0 percent) from behind the arc.

Taylor is Lehigh’s leading scorer overall (13.1) and in Patriot League play (13.6). He’s the only player in the top 11 in the league in scoring, rebounding (5.4) and blocks (1.1). In league games, Taylor is fifth in 3-point percentage (45.2 percent, 33-of-73). Taylor has six games with 20+ points in the Patriot League (after none in his career entering league play). He began with a then-career high 25 points at American. He also had 21 vs Bucknell, 20 against Loyola, 21 vs Navy, 26 against Boston University and 23 at Lafayette. Taylor had the game-winning steal and layup in the final seconds of the big comeback over Navy, while Saturday, he finished 10-of-11 from the floor at Lafayette. It marked the highest shooting percentage for a Lehigh player with at least 10 makes in Brett Reed’s 15 seasons as Mountain Hawks’ head coach.

Higgins and Whitney-Sidney are Lehigh’s first members of the All-Rookie Team since current junior Reed Fenton in 2019-10.

Higgins came on strong in Patriot League play, averaging 11.5 points and 3.1 rebounds in league games, while dishing a team-high 54 assists. Overall, he’s averaging 8.7 points while posting a team-leading 66 assists. In league games, Higgins is ninth in 3-point percentage, knocking down 39.3 percent (35-of-89). Higgins began league play with five straight double-figure point games, which extended to nine of the first 10. In that run was a career-high 26 points at Bucknell in a game that saw him score 13 points in the game’s first 5:24 and 16 in the first 6:51. Higgins was named Patriot League Rookie of the Week in three consecutive weeks in January, becoming the first player across the league to win Rookie of the Week three consecutive weeks since Joe Pridgen of Holy Cross in 2019-20. Higgins became the first Mountain Hawk to win the award three straight weeks since Tim Kempton in 2013-14.

The Mountain Hawks will host Army West Point Thursday night in a Patriot League Quarterfinal at Stabler Arena with game time set for 7 pm Tickets are on sale now at LehighTickets.com and can also be purchased at 610-7LU-GAME during business hours.

Texans go to the polls under sweeping new voting restrictions