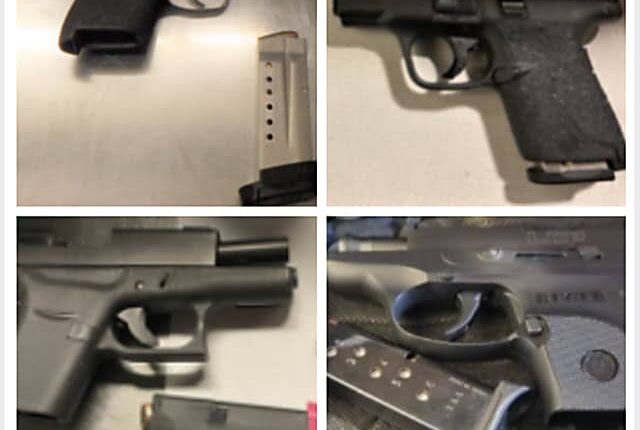 There appears to be a disturbing trend of firearms at one Pennsylvania airport, authorities say.

TSA officers seized the fourth gun in five days at Pittsburgh International Airport on Tuesday, Oct. 18, at 1:07 pm, according to a release by Allegheny County Police of their finding.

The latest gun seized was a loaded Smith & Wesson M&P 9mm caliber handgun within 35-year-old Paul O’Brien of San Diego, CA’s carry-on and he did not possess a valid concealed carry permit, according to the police. TSA officers stopped O’Brien at the security scanner and notified the police and the FBI.

O’Brien was arrested by ACPD and charged with carrying a firearm without a license.

The day before, a 33-year-old from Canonsburg was stopped with a loaded Smith & Wesson 40cal handgun in his backpack at the main security checkpoint. He was found to have a valid carry permit and was not charged by County Police.

Another California man brought a gun to the airport on Saturday, Oct 15, the police say.

TSA officers observed a loaded Glock 9 MM handgun in 40-year-old Jacob Huckabay of Westcliffe’s carry-on bag at the alternate security checkpoint. Just like the other California man, he did not have a permit and was arrested and charged, according to the police release.

The day before that 54-year-old Gordon Vietmeier of Pittsburgh also had a handgun in his carry-on. TSA officers observed a loaded Ruger .380 caliber handgun at the main security checkpoint, and he too was arrested and charged by County Police with carrying a firearm without a license, the police detail in the release.

“Travelers are reminded to not bring firearms with them to the airport. Inspect bags prior to arriving to be certain there are no firearms or other prohibited items. In addition to possible criminal charges, persons in possession of firearms may face TSA civil penalties,” the police say.

Let’s get serious about ending prudent pay in Pennsylvania | Opinion