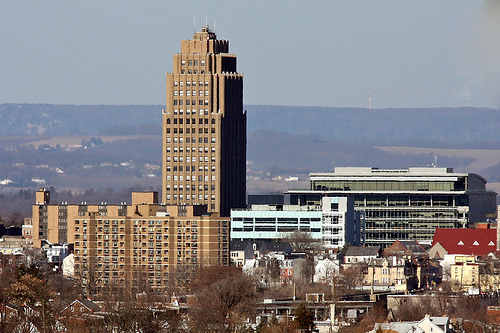 In his nearly 30 years in the Pennsylvania General Assembly, former state Sen. Pat Browne, R-Lehigh, built a reputation for delivering legislation that returned prosperity to his district at the heart of the Lehigh Valley.

Browne, the chairperson of the influential Senate Appropriations Committee, shepherded initiatives to create jobs and economic development, from tax credits that incentivized the redevelopment of Bethlehem Steel’s vast brownfields to a special taxing district that spurred more than $1 billion of investment in downtown Allentown.

But Browne’s last big deal, as a lame duck after losing his seat to a primary challenge this year, has some in the Lehigh Valley and beyond asking whether it was as transparent as it should have been.

In September, Browne introduced a bill to sell the grounds of the former century-old Allentown State Hospital – nearly 200 acres on the border between Allentown and Bethlehem – directly to a prominent real estate development firm, City Center Investment Corp., for $5.5 million.

Browne has close political and personal ties with City Center’s president and co-founder, J.B. Reilly, who in May had bid against another company to purchase the land.

The legislation passed in October as part of a package to sell or transfer smaller pieces of state property, and was signed by Gov. Tom Wolf last month. Browne didn’t respond to messages seeking comment.

Community leaders, including Allentown Mayor Matt Tuerk, said the sale and redevelopment of the hospital property has been a longtime goal that will benefit the city through new housing, jobs, and tax revenue.

They said City Center, which built Allentown’s minor league hockey arena, and hundreds of thousands of square feet of office, retail, and apartments in the city, is a solid choice to accomplish that goal.

“J.B. Reilly’s work has been unquestionably solid work,” Alan Jennings, an advocate for the region’s low-income and vulnerable residents, told the Capital-Star. Jennings was also a founding member of the board that oversees development in Allentown’s Neighborhood Improvement Zone, another of Browne’s redevelopment incentive programs.

State lawmakers who voted against the sale said they were uncomfortable with the urgency and limited information available about the transaction. The bill passed 156-44 in the House and 47-2 in the Senate, with all of the ‘no’ votes by Republicans.

“Half of my objection to it was that it doesn’t pass the smell test,” state Rep. Russ Diamond, R-Lebanon, said. “At the point where the bill came before us and I voted ‘no,’ we just didn’t have the information we needed.”

Rep. Carl Metzgar, R-Somerset, said he was approached by members of the House Republican caucus who said there were concerns about the process of the sale, and that the land was worth more than the $5.5 million price in Browne’s legislation.

“When presented with that, I was going to err on the side of caution,” Metzgar, who also voted against the sale, said.

Rep. Mike Schlossberg, D-Lehigh, whose district included the hospital site until it was redrawn in the most recent round of legislative redistricting, called the sale “as fair as it gets.” He noted the state tried for 10 years to sell the hospital property and buildings without success.

Selling it to City Center was the fastest way to return it to the tax rolls via a developer with the qualifications to succeed.

“You’ve got someone with a proven track record in Allentown and the Lehigh Valley and the taxpayers are getting the assessed value. It’s what I would hope for,” Schlossberg said.

Lehigh Valley business people with experience in real estate and state government, speaking on background because of their positions, called efforts by the Department of General Services, which manages state-owned properties, to sell the land in recent years “weird” and “bizarre.”

Situated off Hanover Avenue, an arterial road running through east Allentown and west Bethlehem, local leaders quickly identified the hospital property as a growth opportunity, but it was several years before efforts to redevelop the site started.

The bill authorizing the sale to City Center followed legislation Browne introduced in 2017 to allow the Department of General Services, which has oversight of state-owned property, to negotiate directly with another private developer to sell the land for $2.3 million. Direct negotiations with TCA Properties of Doylestown, Bucks County, fizzled.

In 2019, Browne sponsored legislation to demolish the hospital buildings and seek competitive bids to purchase and redevelop the site.

The state then spent $15.7 million, according to DGS, to demolish the historic hospital buildings over the objections of local preservationists. It solicited proposals in January to purchase and redevelop the site. DGS received two proposals, one of which was from City Center.

Both were disqualified because they didn’t meet the minimum requirements set forth in the bid solicitation, the agency’s spokesperson, Troy Thompson, said without elaborating.

Thompson declined to identify the other bidder, citing an exception in the Pennsylvania Right-to-Know law for proposals received prior to the award of a contract or the opening and rejection of all proposals.

Recognizing the interest and concern of stakeholders in the community, Thompson said DGS listened and worked to address them in a solicitation for proposals that put the state in a good position to sell the property.

“We cannot dictate who will bid on a property or how many bidders there will be from the marketplace, but when we are faced with a situation where a solicitation yields no responses, we try to determine what the issues may have been that led to the non-responsiveness and re-issue the solicitation,” Thompson said. “Alternatively, DGS can negotiate directly or there may be an opportunity for a direct conveyance through legislative authorization.”

The $5.5 million sale price was a market value established by an independent appraisal of the property after the demolition and environmental remediation, Thompson said.

In a statement to the Capital-Star, Reilly said City Center submitted a 64-page proposal in May detailing a mixed-use development for the site, and offering the $5.5 million minimum bid. The offer was conditioned on City Center being given time to do additional due diligence on the property.

In a letter from Reilly to the DGS officer overseeing the bidding process, dated May 18, the deadline for proposals, Reilly wrote that City Center was unable to comply with the state’s requirements, which did not allow proposals with contingencies.

“While we are interested in pursuing the redevelopment of the site, our preliminary evaluation identified several significant areas of concern that would require additional evaluation before we would be able to unconditionally move forward on the project,” Reilly wrote.

City Center needed time for environmental testing of a landfill area, subsurface rock testing, and to explore the feasibility of zoning and land-use changes needed to build out its proposed redevelopment, the letter reads.

He concluded by writing that City Center would pay the state’s $5.5 million minimum price if the state entered into an agreement of sale that allowed City Center to address its concerns.

In his statement, Reilly said that after four months of examination and planning City Center was ready to move forward with its offer to buy the property.

Browne and Reilly’s connections go back to their childhood. They grew up across the street from each other in Salisbury Township, a suburb of Allentown.

In 2009, the General Assembly passed Browne’s legislation that would transform Allentown’s downtown, where department stores had long closed down or moved to suburban malls, office workers were few and the remaining businesses struggled.

Developers who build in the zone can use future tax revenue projected to be generated by a project as collateral to get construction financing. When the building is complete, the owner can use sales tax, payroll tax and some other state taxes to pay the debt service for the project.

In the last decade, Reilly’s company, City Center, has been the largest beneficiary of the program, with more than 20 projects completed that include apartment buildings, a hotel, mid-rise office buildings and renovations to existing retail and restaurant spaces.

The biggest donor to Browne’s unsuccessful 2022 primary election campaign was the political action committee for the lobbying firm Pugliese Associates, which lists City Center among its clients, according to Department of State records.

Pugliese donated $252,500 to Browne’s campaign, according to campaign finance reports. Reilly and his business partner Joe Topper, were Pugliese’s largest donors, each contributing $100,000 to the committee, campaign finance records show.

Browne lost the party nomination in May to Jarrett Brown, a Parkland School Board director who was heavily backed by a handful of wealthy donors, including mega donor Jeffrey Yass, who funneled $410,000 into Coleman’s campaign.

Allentown developer Nat Hyman said he offered to buy the hospital property with the buildings intact for $2.3 million when the state was planning to knock them down.

“I said wait a minute, I will buy that property today, check in hand for $2.3 million, and you don’t have to spend the state money to demolish them,” Hyman said, adding that his offer wasn’t entertained.

Hyman said it doesn’t make sense why the state didn’t put the property out for bids a second time without the restrictions that City Center objected to.

“I’m sure if there were no restrictions and you could buy 200 acres in downtown Allentown there would be no end to the interest in buying it,” Hyman said.

John Callahan, a former mayor of Bethlehem who now works for Peron Development , said his firm explored bidding for the property. While there were concerns about steep slopes, it was an attractive piece of land. But the company’s leaders determined that they had enough projects in development at the time, Callahan said.

“I think it’s a very developable parcel of property. Not one that you want to see sitting vacant for very long,” Callahan said.