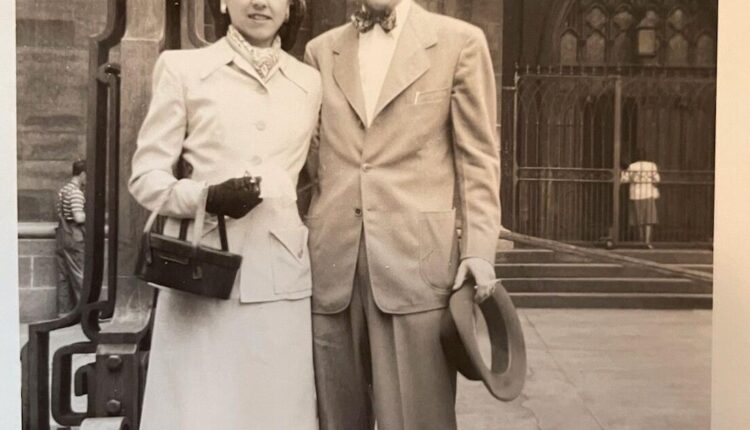 BLUEFIELD — During this holiday season, a former Mercer County teacher is still hoping that an heirloom ring that was lost 35 years ago can come back to her family.

Ann R. Farley, who taught at Bluewell Elementary School from 1984 to 85 and Bluefield High School from 1985 to 1986, now lives in New Bethlehem, Penn. She recently reached out to the Bluefield Daily Telegraph in hopes of finding an heirloom that was left behind when her family left Bluefield years ago.

“At this special holiday for giving thanks, I find myself thankful for hope,” she said “For, it is hope that has kept a spark alive after this past 35 years. I might still have a chance to recover a precious heirloom that was lost in Bluefield. Of course, being an eternal optimist has certainly helped.”

The ring was first purchased by her father, Charles Jack Rodgers, for her future mother, Edna Mae Stillmun.

“This story actually began in 1948 when my father bought his beautiful bride a gold wedding band,” Farley recalled. “As tradition has it, the inside was engraved withe CJR to EMS, 6-12-48. My mom was a devoted wife and lovingly raised eight children between the 1950s through the 1970s. At some point, an accident that caused her left hand to be smashed in a door resulted in the wedding ring being cut off, and was replaced with a modern version that she wore until her 87th birthday and through the remainder of their 60 years of marriage .”

“After Lauren’s first birthday, mom offered me her damaged ring as I had expressed an interest in having it repaired and enhanced by a local goldsmith,” she recalled. “This resulted in a simple design that allowed the placement of a small ruby, Lauren’s birthstone, into the band while preserving the wedding engraving. After the project was completed, I was excited about the multi-generational ring that I would be able to give my daughter once I knew she would appreciate it.”

Later, Farley decided to let her little girl see the ring that would one day belong to her.

“Then came one of the most regrettable and poor choices I made in my adult life: I showed it to my 4-year-old, and explained that one day it would be hers to wear,” she said.

“It’s unclear to me exactly when she removed it from my jewelry box, perhaps to show to a little friend, maybe at the Church of the Nazarene where she attended daycare, or as late as the following year as a Kindergarten student at Memorial Elementary, but I think it was the former,” Farley said. “It is even possible that she played with and lost it in our home on Parkway Avenue. We stopped once and spoke with the current owners after dropping off I-77 on our way traveling southward.”

Today, Farley still hopes that the ring can be found so her granddaughter can have it.

“Over the years, I’ve allowed myself to dwell on the regret of the loss, which always resulted in a sour feeling in my stomach,” she said. “In 2015, our first granddaughter was born to Lauren and Aaron, a precious little girl whom they named Ruby. Now we have a real gem in our 6-year-old granddaughter. But, of course, I think about the ring more often now, and still hold out hope that someone in Bluefield knows about it. It would mean the world to me to put it on the hand of little Ruby, who should be wearing it.”

“Though the ring has far more sentimental value, I would be happy to pay generously for its return to its rightful owner,” she added.

Farley said that she can be contacted on the internet at [email protected] She does not have a Facebook page.