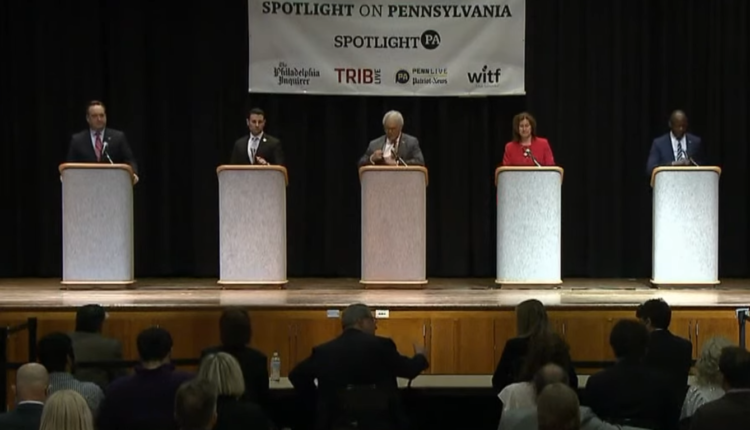 By contrast, all five of Tuesday’s attendees have been polling in low single digits, though those same surveys have shown that a significant number of Republicans have yet to make up their mind in the primary. An Eagle Consulting Group poll released last week put the total of undecided voters as high as 44 percent.

In an effort to win over those voters, the five participants on Tuesday answered an hour-and-a-half of questions on transportation funding, election law, and some hot-button culture war topics among others.

On the first issue, most expressed frustration with Pennsylvania’s 57.6 cent gas tax, among the highest in the country, combined with the state’s poor roads and bridges.

Pa.’s governor candidates feud over how to reduce pain at the pump

To fix the issue, Corman, Gerow and Hart said they’d use about $2 billion in remaining federal stimulus money to either fund road and bridge projects or offer a temporary reprieve to motorists on the tax.

Pointing to the absent McSwain’s call to permanently cut the tax in half, Gerow called it “gimmickry” without a clear way to replace the lost funding.

Both Hart and Gale added that they’d support repealing the prevailing wage, or a law that pays workers on public construction jobs a union wage even if the contractors are non-union, as a way to control costs.

But Gale was not in favor of using any of the federal stimulus dollars in the efforts to cut costs.

“I would give it right back to sleepy Joe Biden,” Gale said.

On voting, most of the candidates said they would repeal Act 77, the state’s 2019 mail-in voting law.

Corman, who voted for the law, argued that its verification requirements were stripped out in court in suits brought by Gov. Tom Wolf. He said he’d offer more details on his plans for election law in a policy platform soon.

Moderators pressed candidates on why changes were even needed. The push for changes, they noted, only came after former President Donald Trump amped up baseless claims of fraud. Republicans then seized on this uncertainty to push for expanded ID requirements to vote, and other measures.

Corman dug in that any violation of the state’s election law, including a wife innocently dropping off their husband’s mail-in ballot, was proof of fraud. But “I’m not sitting here and saying to what level it is,” Corman added.

On abortion rights and transgender women in women’s sports, the candidates’ stances were also fairly uniform. All said they’d support further restricting abortion in Pennsylvania, which is currently legal up until 24 weeks.

Some, such as Corman, said they wanted to see how the U.S. Supreme Court ruled on the topic before giving a stance. Others said they’d support Texas’ six-week ban.

Zama and Gale went even further, saying they’d support a complete ban on abortion in all circumstances, including when a pregnancy was caused by rape or incest.

“Whatever you do to stop” a pregnancy, “whether it’s six weeks or 16 weeks, is murder,” Zama said.

The five added that they’d sign a bill that just passed the state House to ban trans women from playing women’s school sports.

In a lightning round, the candidates were also asked if they support legalizing recreational marijuana. Gale, Hart and Zama said no, while Gerow said yes.

Corman said he’d consider it depending on specifics, but he “wouldn’t lift a finger to try to help it.”

Another constant was the attendees making frequent reference to their missing opponents. Gerow said it was proof he was the right person to take on likely Democratic nominee Josh Shapiro in November.

Without naming names, Hart added that the candidates who didn’t show appeared content to run television ads making claims that they couldn’t back up on stage.

Barletta, White and McSwain all signed a letter last month declaring that they would only attend a debate if the moderator was a registered Pennsylvania Republican who “must not have spoken negatively about any of the candidates on stage” or works for an organization that has “maligned one of the candidates” among other conditions.

Spokespeople for the candidate said they were following the letter in boycotting Tuesday’s debate.

Corman also signed on, but decided to attend Tuesday’s debate anyway a week after he nearly dropped out of the race.

“Jake is in this race to fight for every Pennsylvanian,” campaign spokesperson Dave La Torre said. “That’s what he and President Trump discussed, and that’s what he’s going to do Tuesday night in Gettysburg.”