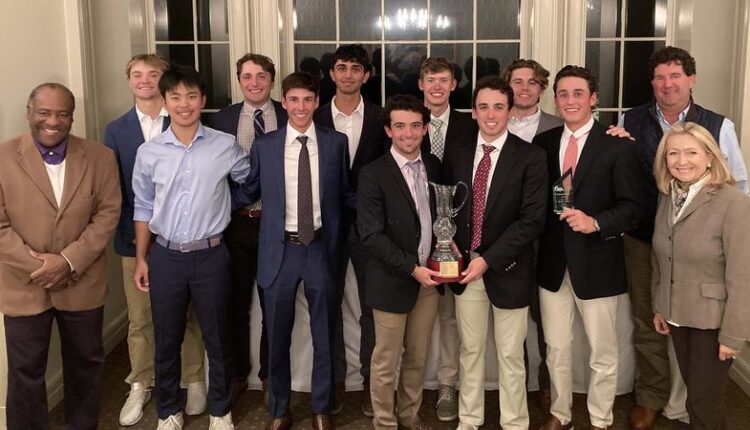 GLADSTONE, NJ – The President’s Cup is headed back to Bethlehem for a third straight year as Lehigh defeated rival Lafayette 12.5-7.5 in the annual match play event Tuesday at Hamilton Farm Golf Club. All 10 Mountain Hawks who competed contributed at least one point to Lehigh’s winning effort.

First-years Will Caronchi and Jake Roth were undefeated on the day as Lehigh won three out of five matches in both the better ball and alternate shot portions and then won six of 10 singles matches, including each of the first four to secure the victory.

Caronchi and Roth defeated Quint Dingledine and Michael Bell by 1 up scores in both doubles formats. In singles action, Caronchi won 3 and 2 over Augie Beers and Roth followed with a 4 and 3 win over BoYoung Chang. The Lehigh duo shared the day’s MVP award for their performances.

Senior Joey Dotta teamed with first-year Aiden LeBlanc to earn a win at better ball as did the sophomore duo of Jahan Bains and Aidan Oerhle.

In alternate shot, senior Daniel Song and junior Edmund Broderick teamed up to earn a point and seniors Sam Barton and David Hurly combined to win the final match of the alternate shot portion.

Dotta started the 4-0 run to start singles play with a 4 and 3 win over TJ Repczynski. All three first-years, LeBlanc, Caronchi and Roth won to put Lehigh up 10-4.

Oehrle and Hurly picked up victories in their respective matches, while Barton halved his match against Mike Walsh.

Lehigh alumnus Todd Stires, who passed away earlier this year, sponsored this event. Following their victory, the Mountain Hawks joined Todd’s widow Denise, his brother Craig and Peter Morales for photos with the cup.

The Mountain Hawks will now shift focus to hosting the Lehigh Invitational, Friday and Saturday on the Grace Course at Saucon Valley Country Club.

Pa. House’s Krasner committee cancels hearing after prosecutor insists it be made public

Federal government has given $800M to keep indebted farmers afloat