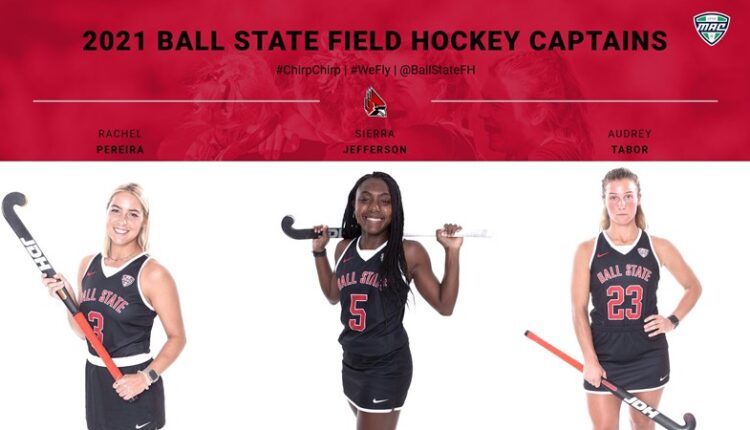 “We are fortunate to have a spectacular veteran group on this year’s squad,” Bernthal said. “Rather than our typical co-captain model, the team’s voting yielded three talented and selfless young ladies to serve as tri-captains. Sierra, Rachel, and Audrey have stepped up in their own ways to lead our team through an unprecedented time. They are fearless, strong, tireless, and most of all they lead with great love for this team and Ball State university.”

Last season, Jefferson was named to the Second Team All-Mid-American Conference while also earning MAC Offensive Player of the Week (10/29/19). She also garnered Academic All-MAC accolades for the third-straight season. Jefferson, a 2019 Zag/National Field Hockey Coaches Association (NFHCA) Academic honoree, started in all 18 games for the Cardinals last season. Her first goal last year was in a shutout win over Davidson (9/1/19). After that, she found the back of the net two more times — versus UC Davis (9/15/19) and Saint Louis (9/16/19). Jefferson finished third on the team in shots (15) and shots on goal (12). For her career, Jefferson has started in 50 total games for BSU, has scored nine goals while totaling 16 points for the Cardinals.

“Sierra is a woman of few words, but her play speaks volumes. She has blossomed as a player in truly amazing ways due to her tireless work ethic. You can regularly see her creating attacking opportunities for us– a role she has embraced more “In the last two years. One of her greatest gifts to the team is her ability to keep things light and fun. She has an awesome sense of humor which is needed on such an intense and driven team. Sierra brings the best out of everyone and is the consume team player.”

Pereira has had a lot of success on and off the field earning Academic All-Mid-American Conference honors for three-straight seasons along with also being a recipient of the 2019 Zag/National Field Hockey Coaches Association (NFHCA) Academic award. Last year, two of her three goals were collected against Big Ten opponents — Indiana (9/8/19) and Michigan State (9/22/19). She chipped in the overtime game-winner at league-foe Longwood (10/25/19). Pereira led the Cardinals in shots last season with 27 while averaging 1.50 shots per game. Pereira finished the season with three defensive saves. In 2018, Pereira earned Second All-MAC honors. For her career, Pereira has started in 49 contests for the Cardinals and has collected 7 goals with a career best four in 2018.

“Rachel is a wise and seasoned defender. She has shifted into several crucial positions on the field over the course of her career. Few players can do that as seamlessly as Rachel has. She is fearless and LOVES field hockey and this Ball State team. “She has been instrumental in keeping our group focused on the goal of winning a MAC Championship during all of the uncertain times this year. She will always do what the team needs, including always being willing to lend a helping hand off the field. As a result, her teammates fight tirelessly for her.”

Tabor started in all 18 games for the Cardinals last season. She earned Academic All-Mid-American Conference team and the 2019 Zag/Field Hockey Coaches Association (NFHCA) Division I National Academic squad. Tabor garnered her first post season All-MAC accolade after being named to the All-MAC Second Team in 2018. Last season, Tabor led the team and ranked third in the league in defensive saves with four. She tallied her first defensive save of the season at Big Ten foe Northwestern (9/16/19). Tabor recorded saves against Central Michigan (9/28/19), Michigan (10/13/19) and Appalachian State (11/1/19). In 2018, the defensive veteran, notched a defensive save in MAC play against Miami (9/15/18) and then a goal line save in an overtime game versus the University of California Davis (9/24/18). For her career, she has started in 36 career games for the Cardinals.

“Audrey is one of the toughest competitors I have ever coached.
This is a girl whose motto is “I would rather die than lose!” She’s demonstrated this in crushing fitness and lifting records progressively each year. She’s also the person opponents probably hate facing the most. Her work ethic on the field is unmatched: she’s physical, gritty, and tireless. The hardest days bring out the best in Audrey. Our whole team has watched her mature as a leader over the years, becoming a powerful voice for both accountability and encouragement on our team.”

The Ball State field hockey team’s highly anticipated 2020-21 season that was postponed this fall due to the COVID-19 global pandemic will begin the week of March 1st with home matches against Miami (OH) and the University of Louisville. Louisville concluded their fall 2020 season as Atlantic Coast Conference (ACC) Champions and finished as runners-up in the conference tournament. Ball State’s official MAC slate will kick off the following weekend (March 12-23) with games at Appalachian State.

Pa. schools have doubled their solar power use since 2020