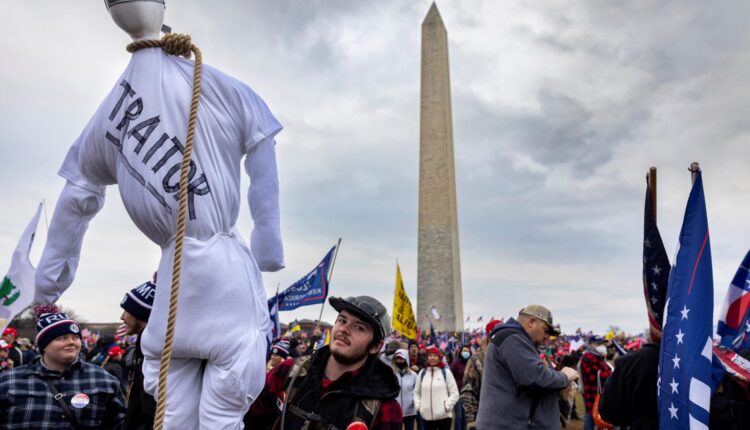 As candidate filings for the 2022 midterm elections begin kicking campaign season into full swing, some experts worry the threatening rhetoric and language being supported by Republican candidates could escalate to violence.

The U.S. Department of Homeland Security has already issued a warning that the midterm elections could be a rallying point for domestic extremists, sparked by unproven claims of election fraud.

Dr. Tiffiany Howard, an associate professor at UNLV who studies international security and political violence, said government mistrust along with frustration over economic strain has already created a perfect storm.

“We have an election cycle taking place, people who are still frustrated from the pandemic, and the economic situation still very bad for a lot of Americans and then politicians who are really socially irresponsible,” she said. “If these candidates are whipping people up into a frenzy who are already in a heightened state and it triggers violence at campaign events, that is something we should be concerned about.”

In his April 2021 report “How hateful rhetoric connects to real-world violence,” Daniel Byman, a senior fellow from the Brookings Institution who studies foreign policy, pointed to the Jan. 6 insurrection.

At the Washington, D.C. rally prior to the Capitol being breached, then-President Donald Trump encouraged supporters to “fight like hell.”

“It is often difficult to trace one leader’s statement to subsequent events, and even in the case of the Capitol insurrection the president’s defenders insist on his innocence,” he wrote. “However, a range of research suggests the incendiary rhetoric of political leaders can make political violence more likely, gives violence direction, complicates the law enforcement response, and increases fear in vulnerable communities.”

Threatening language or aggressive actions from and against politicians isn’t new.

Law enforcement in 2020 announced they had thwarted a plot to violently overthrow and kidnap Democratic Gov. Gretchen Whitmer of Michigan.

The plot, as reported by Michigan Advance, came “after months of anti-Whitmer rhetoric and outrage from right-wing activists, who have held numerous protests against her use of executive powers throughout Michigan’s COVID-19 outbreak.”

According to a plea agreement, one of the men confessed to a plan to “recruit 200 people to storm the Capitol, try any politicians they caught for ‘treason,’ and execute them by hanging on live television.”

Ahead of the 2020 presidential election, the Department of Homeland Security warned violent white supremacy was the “most persistent and lethal threat” faced in America.

A year after Jan. 6, attack on the U.S. Capitol lives on in hundreds of court cases | Analysis

Recent threats received by Nevada Gov. Steve Sisolak and his wife Kathy have sparked concerns about how the election could unfold in Nevada.

Last month, the Las Vegas Review-Journal reported Sisolak and his wife were at a Las Vegas restaurant they were subjected to a torrent of verbal threats and abuse.

“We should string you up on a lamppost right now,” one man yelled.

“You know what they do to traitors?” another man asked. “They hang them.”

Following reports of the event, the man held a press conference and refused to apologize, citing “free speech,” and said his actions were borne out of frustration with Sisolak’s response to the pandemic.

Joey Gilbert, a Republican running for governor, wrote in a social media post that he couldn’t “think of a more deserving person” than Sisolak to get harassed and threatened.

In a later statement on the incident, Gilbert called it a “verbal attack” and argued the actions were a form of free speech.

Las Vegas City Councilwoman Michele Fiore said Sisolak should be “lucky it was just words” and “if you look at the history of dictators pitchforks will be next.”

Howard said what happened to Sisolak and his wife is a trouble indicator of where things could be heading.

“Do they feel so strongly that the next time someone encounters Gov. Sisolak and his wife, will there be violence?” Howard asked. “Next time maybe it will be someone who maybe goes a bit further. Yes, you have the right to say almost anything you want in the United States, but at the same time does it enable someone else who’s not afraid to cross a line?”

While the Nevada Republican Party discouraged the man’s actions and said “there is no place for the behavior and violent threats,” Howard said there hasn’t been enough of a forceful response to prevent future encounters.

The threats against Sisolak aren’t the only example of confrontations of elected officials intensifying.

A recent proposal out of Washoe County seeks to make changes to the municipality’s election process by converting to hand counting ballots and calling in the National Guard to monitor polling sites.

The resolution was borne from the big lie, a conspiracy theory pushed by Trump and his supporters, including Gilbert, Fiore and multiple Republican candidates for office in Nevada and the nation, that falsely claims the 2020 election was rigged against him and there was massive voter fraud.

Nevada Secretary of State Barbara Cegavske, a Republican, did a review of numerous fraud allegations lodged by Republicans issues in Nevada, and announced in April she found no supporting evidence of widespread voter fraud in the 2020 election.

The Washoe agenda item was pulled, sparking outrage by supporters during hours of public comment (the resolution is expected to go before the county at a later date).

During the Feb. 22 commission meeting, one man, who at previous meetings identified himself as the “election integrity chair” of the Washoe County Republican Party, said Washoe County Registrar of Voters Deanna Spikula was “guilty of gross incompetence at best, treason at worst” and told commissioner to “either fire her or lock her up.”

In three minutes of public comment he accused commissioners of treason seven times.

Gilbert, who also spoke during public comment at the Washoe County Commission meeting, referenced the man’s unsubstantiated claims and alleged commissioners were committing treason. He also questioned whether elected officials in Washoe County were legitimately elected.

It is not only irresponsible but dangerous for candidates, as well as elected officials, to support and endorse false claims, Howard warns.

“If this person is elected who believes this is treason and these things happened, then the person sitting at home who felt this way is now emboldened to do something about this ‘treason,’” she said.

It’s not just in the governor’s race where candidates are embracing conspiracy theories.

KUNR-FM reported last week that former Nevada Attorney General Adam Laxalt, who is running for U.S. Senate and another backer of the big lie, has embraced support from members of far-right extremist groups, including rural sheriffs clinging to a fringe belief that in their counties they have legal supremacy over state and federal law.

By giving a voice to and publicly siding with such groups and beliefs, Howard said candidates are “enabling these types of groups to exist to grow and to engage in behavior that runs counter to democratic ideals in a civil society.”

“As long as they continue to push this lie, eventually they will get someone who thinks they are carrying out the will and wishes of one of these Republican leaders and act upon it,” Howard said.

If there is an increase of threatening language as well as violence at campaign events where “people are getting arrested, if there are any casualties especially or anyone is hurt, then we can make assumptions that the candidate’s rhetoric is influencing the violence and bringing out an element in a certain population that’s willing to fight for their ideals that are articulated by their candidate.”

Even if violence doesn’t occur, Byman wrote the threat and fear of violence could be enough to stifle election turnout.

“Given the increased likelihood of violence, the targeting of particular communities, and a possibly fitful law enforcement response, it is logical that communities may experience more fear,” he wrote. “This fear can hold, however, even when actual levels of violence are low: The perception fueled by hateful rhetoric overcomes the reality.”

Michael Lyle is a reporter for the Nevada Current, a sibling site of the , where this story first appeared.