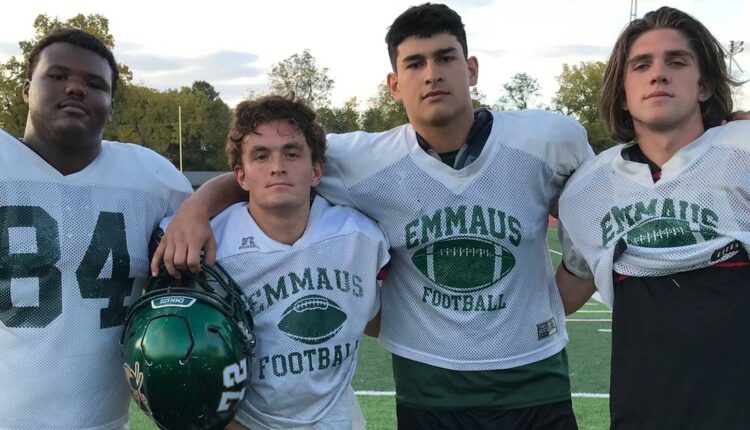 Officially, Aidan Garrett was listed at 5-foot-8 and 180 pounds for the Emmaus football team this past fall.

But even Garrett admitted those figures are a stretch and he’s 5-8 on “only a good day.”

Those who watched the Green Hornets play in 2022 probably could have been convinced that No. 32 in the green jersey was more like 6-foot-2 and 230 pounds.

“He plays so much bigger than that it’s ridiculous,” Emmaus coach Harold Fairclough said. “He just plays and he battles. Sometimes you’ll see him shoot a gap and make a tackle for a loss on film and then two plays later some big, 285-pound offensive tackle is rolling him 10 yards down the field. But Aidan just kept getting back up and getting after it.”

Emmaus inside linebacker Aidan Garrett was the EPC’s scholar-athlete in football for the 2022 season. (Contributed photo / Bishop Photos)

Garrett got after a lot of running backs, receivers, and quarterbacks this season, making a team-high 87 tackles, including five sacks.

He wasn’t just tenacious on the field. He hit the books as hard as he hit opponents and was as active in the community as he was from his inside linebacker spot.

His effort on the field, in the classroom, and in the community, led to Garrett being chosen as the Eastern Pennsylvania Conference’s scholar-athlete for football.

“I’m really proud of this award,” Garrett said. “It’s awesome. It felt good getting recognition for all the hard work I put into school.”

And when he’s not playing football or practicing football, he’s getting ready for lacrosse in the spring.

“Aidan was such a great leader on and off the field for us and that’s why he was one of our captains,” Fairclough said. “He is involved in so many extracurricular activities that make him such a well-rounded individual. He deserves that league scholar-athlete award.”

Garrett hopes to play lacrosse in college where he will major in electrical engineering.

Asked what he’d like to be remembered for at Emmaus, Garrett said: “Just the hard work I put into the sport even though I had a lack of size. I definitely wasn’t the biggest out there, but I always tried my hardest and I want people to remember that if Garrett was able to do it, they can, too. . . . Hopefully, that’s what the underclassmen can take away from me. Hopefully, I inspired some of them.”

For the first time since 2014, Dieruff inducted new members into its Hall of Fame.

Two of the three honorees at the ceremonies Dec. 17 between games of a girls-boys basketball doubleheader, should have felt right at home surrounded by basketball players.

Anthony Ross, who finished with a school record of 1,419 points and was named The Morning Call’s player of the year as a senior in 1999-2000, which the other basketball player honored.

The third honoree was beloved Dieruff alumni association member and unofficial school photographer John Hughes, who was a wrestler in the school’s first two years of existence from 1959-61.

Hughes said wrestling coach Larry Fornicola “made a difference in my life.”

When he left Dieruff in 1961, Hughes said he wanted to come back and pay back the school for it all had done for him and in 2011, he was instrumental in the formation of the alumni association and the mission to promote “Husky Pride” for the current students and teachers and administrators as well as the alumni.

Hughes, who graduated from Lehigh University in 1965, said: “Fornicola gave me words to live by. He said success is not being the best. Now here was a national champ from Penn State telling me this. He said success is always doing your best. That philosophy has carried me through my life. No matter what I was going to do in my life, I had to give it my all. I think those are valuable words that should be shared.”

Four new members were inducted into the Spartans Hall of Fame on Dec. 16. They were:

Emily Cerciello, a member of the class of 2011, was a four-sport athlete participating in cross country, volleyball, basketball, and soccer. She was the school’s female athlete of the year in 2011. Also as a senior, she was awarded the Gerald Anuszewski Award, given by coaches to the most ideal senior student-athlete. She was a three-year district qualifier in cross country. She was a four-year letterwinner in girls volleyball, where she helped the team reach the state semis in her senior year. In soccer, she was a four-year starter and letterwinner and voted the Lehigh Valley girls soccer scholar-athlete as a senior.

He was a morning call all-area selection his senior year. He was also the Southern Lehigh boys soccer scholar-athlete. As a basketball player, he was a three-year letterwinner and was a Colonial League all-star selection while making more than 100 3-pointers in his career.

Terry Nevill was boys soccer coach from 2002-11 and again in 2013-14. He was a five-time Colonial League Coach of the Year and a two-time Morning Call Coach of the Year. He had an overall record of 202-60-19 and won three league and six District 11 titles. He led the team to the state semis in 2005 and continues to work at Southern Lehigh as an assistant coach.

One team and one individual will be honored at the Whitehall Hall of Fame induction ceremony on Jan. 27 in between the JV and varsity boys basketball games between Emmaus and Whitehall.

The team being honored is the 1989 Zephyrs softball team that went 23-2 and won both the Eastern Pennsylvania Conference and District 11 titles. In addition to being outstanding on the field, the ’89 team won the Lehigh Valley Sportsmanship Award from the umpires association. The team was led by coach Stan Luckenbill and star players Lorie Erie Schmalze and Meri Wall. All three are in the Lehigh Valley Softball Hall of Fame.

Will Peifley, a member of the Class of 1959, who was a multisport athlete who excelled on the basketball court as a player and a coach, is also being honored. Peifley was at all-conference center in basketball as well as a member of the Whitehall baseball and track and field teams. He had an outstanding basketball career at ESU. As the girls basketball coach at Catasauqua, Peifley led two teams to Colonial League titles with the 1976-77 team going 22-0.