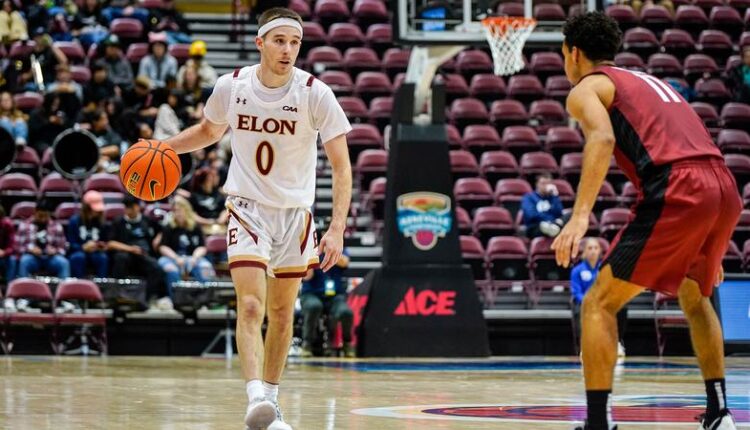 ELON, NC – The Elon University men’s basketball team will stay in-state for its first true road contest of the season as the Phoenix travels to NC State on Saturday, Nov. 19 at PNC Arena. Tip off is set to begin at 1 pm

• Saturday’s game will be streamed live on the ACC Network Extra.
• Listen to the Elon Sports Network from Learfield on The Varsity Network app.
• Longtime voice of the Phoenix, Taylor Durham, will be on the call with the pregame show beginning at 12:30 pm along with analyst Javik Blake.
• Links for the broadcast and live stats can be found on the Elon men’s basketball schedule page at elonphoenix.com.
• Other in-game updates will be provided on Twitter by following @ElonMBasketball.

• Season tickets are now on sale for $170 for men’s basketball.
• Single-game tickets are now on sale! Single-game tickets begin at $15 for men’s basketball.
• Fans are able to purchase a book of 10 ticket vouchers for $75. These vouchers are redeemable for a ticket to any Elon men’s or women’s basketball regular season home game. Use all 10 for any one game, or use one voucher for 10 different games. Fans will also receive an Elon mini autographed basketball from the head coaches. These tickets represent a 50 percent savings for men’s basketball tickets and a 25 percent savings for women’s basketball vs. single-game prices.
• Ticket vouchers must be redeemed for a reserved seat ticket prior to entry. This can be done at the Schar Center Box Office during regular business hours (MF, 9 am-5 pm) or starting 90 minutes prior to tipoff.
• For more information, visit ElonTickets.com or call the Elon Ticket Office at 336-278-6750.

• The Phoenix and the Wolfpack are meeting for the 31st time in the all-time series between the intrastate rivals on Saturday with NC State holding a 22-8 ledger over Elon.
• Both teams last played each other in the 2011-12 campaign with NC State coming away with an 82-67 victory at Reynolds Coliseum. Phoenix forward Lucas Troutman dropped a game-high 22 points and grabbed seven rebounds for the maroon and gold.
• Elon’s last win in the series came all the way back in the 1923-24 season.

• The Phoenix hosted North Dakota on Thursday night and nearly overcame a 13-point deficit with five minutes to play, but ultimately fell to the Fighting Hawks, 77-73.
• Sean Halloran led the Phoenix with 21 points on 7-of-8 shooting including going 4-of-4 from three. The 21 points was a new Elon high for the graduate student.
• Zac Ervin (15) and Torrence Watson (12) also scored in double figures for the Phoenix with Watson adding his team-best third double-digit scoring outing of the season.
• As a team, Elon shot nearly 46 percent from the floor and knocked down 7-of-15 from beyond the arc for a season-best .467 percent.

• Taylor was named the 19th head coach of the Phoenix on April 15, 2022. Taylor arrived to the Phoenix after spending the past three seasons as an assistant coach at the University of Iowa.
• Prior to working with the Hawkeyes, Taylor spent five years as head coach at Lehigh University followed by six seasons as the head coach at Ball State University and three at Belmont Abbey College.
• In his time at Iowa, the Hawkeyes ranked as one of the top offensive teams in the country, ranking fifth nationally in scoring average in both 2021 (83.7) and 2022 (83.2). The program also led the country in assist-to-turnover ratio in both seasons.
• Taylor was a two-time Patriot League Coach of the Year (2003, 2004) and led Lehigh to both the regular season and tournament titles in 2004, earning a bid to the NCAA Tournament that season. He also guided Ball State to the 2009 MAC West Division crown.

• Elon is currently fifth in the CAA in scoring at 73.5 points per game. The maroon and gold also rank in the top five of the league in steals at 6.75 per contest.
• Halloran leads the Phoenix in scoring at 12.3 points and has come on strong the past two games averaging 17.5 points on .631 percent shooting (12-of-19). He is also shooting 60 percent from downtown during that stretch (6-of-10).
• Watson is averaging 11.5 points per game and is leading the maroon and gold on the boards at 5.3 rebounds per contest.
• Ervin is also averaging double figures for the Phoenix at 10.5 points while knocking down a team-best nine three-pointers.
• Halloran leads the Colonial Athletic Association in total steals with 11 (2.8 SPG), with that number also ranking top-15 in the country. The Orlando, Fla., native leads the Phoenix in minutes (32.3) and assists (17).
• Three rookies – Max Mackinnon, LA Pratt and Deandre Smart – have each seen the floor for 10+ minutes in each game they have played so far during their first collegiate season. Mackinnon averaged 26.3 minutes over his past three games after logging 26 against North Dakota.

• Elon welcomes back seven letter winners from last year’s team including five upper class men. Among the notable returners for the maroon and gold includes graduate student Torrence Watson and senior Zac Ervin. Both players are the leading returning scorers for Elon at 9.2 and 7.1 points per game, respectively.
• The Phoenix also welcomes back redshirt Jerald Gillens-Butler, who hopes to return to form after being named an All-Colonial Athletic Association honorable mention prior to last year. The Orlando, Fla., native appeared in only 10 games last year after missing most of the prior season due to an injury.
• A pair of graduate transfers will look to make an immediate impact for the Phoenix this season. Sean Halloran arrives to the Phoenix after an outstanding four-year career at Belmont Abbey. The Orlando, Fla., native finished as the all-time career assist leader with the Crusaders while helping the program to back-to-back Conference Carolinas Tournament Championships and three straight NCAA tournament appearances. He rounded out his career averaging 14.4 points per game as a senior and concluded his career with 1,422 points.
• Another graduate transfer, John Bowen III, brings size to the Phoenix front line at 6-foot-9 and 215 pounds. The Bladenboro, NC, native last played at UNCW in 2019-20 and appeared in 28 out of 32 games. Prior to UNCW, Bowen III was a teammate of Halloran’s at Belmont Abbey and averaged 8.9 points per game and 5.5 rebounds per contest in 2018-19 while starting 27 of 28 games.
• A pair of freshmen will also look to make an impact for the maroon and gold in 2022-23. Max Mackinnon is a 6-foot-5 swingman from Brisbane, Australia, where he won back-to-back gold medals with the U20 Australian National Team. He was also named an All-Star 5 at the Australian National Championship.
• Another freshman, LA Pratt, is a 6-foot-5 guard from Columbus, Ohio, who was a three-time All-4A Team member and three-time conference champion at Lincoln Park High School. He scored over 1,000 points in high school and helped guide the program to two WPIAL Championship appearances and two State Semifinal appearances.

• NC State is undefeated at 3-0 after earning a 107-74 win against FIU on Tuesday. Saturday will be the Wolfpack’s fifth straight game at home to start the season.
• The Wolfpack went 11-21 during the 2021-22 campaign and was 4-16 in the ACC. It was the first losing season for NC State head coach Kevin Keatts with the program in his five seasons at Raleigh.
• NC State is averaging 93.0 points per game, which is 17th overall in the nation. Ole Miss graduate transfer Jarkel Joiner leads the team at 20.3 points per contest and is currently part of the 50-50-90 club with his .579 field goal percentage, 50 percent from three while also knocking down .909 percent of his free throws.
• Sophomore Terquavion Smith is second on the team in scoring at 20.0 points while dishing out a team-best 17 assists. The Greenville, NC native was selected to the All-ACC Preseason First Team and named to the 2023 Jerry West Award Watch List.

Elon continues his two-game road swing before the Thanksgiving break to Jacksonville State on Tuesday, Nov. 22. That matchup is set for a 7 pm tipoff.

Reed Announces Gillus and Whitlock as Newcomers in Class of 2027