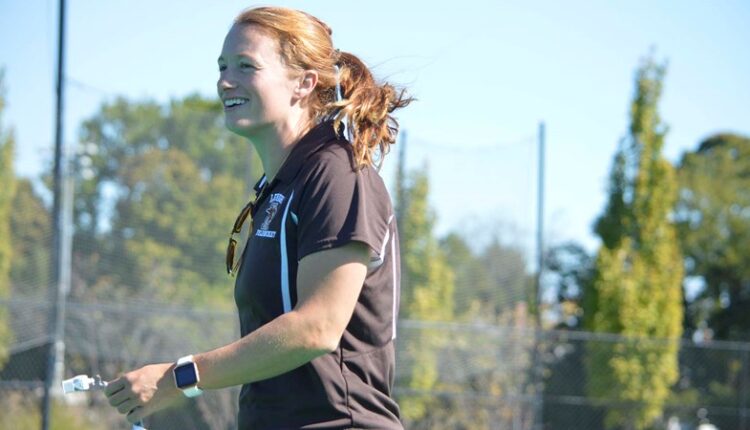 BETHLEHEM, Pa. – After making a huge impact on the rise of Lehigh field hockey over six seasons, Taylor Dyer has been named head coach at Gettysburg College, as announced on Friday. It marks Dyer’s first-career head coaching position. Dyer, who finished her fourth season as associate head coach, has been alongside Lehigh head coach Caitlin Dallmeyer from day one at Lehigh. Together, they helped build a program that went 11-7 in 2021, the Mountain Hawks’ first winning season since 1994.

“While it is difficult to leave a place as special as Lehigh, I am leaving with a deep appreciation for the lessons I’ve learned, relationships I’ve formed and memories I’ve made and will cherish forever,” said Dyer. “Thank you to Dean of Athletics Dr. Joe Sterrett and Associate Athletic Director Stacy Shiffert for the unwavering guidance and support they have provided to the field hockey program and to me personally.”

“I struggled to adequately express my gratitude and appreciation for head coach Caitlin Dallmeyer, who invited me on this journey six years ago and has been a thoughtful mentor, fierce supporter and loyal friend ever since,” Dyer continued. “I feel more than equipped to lead my own program after learning from someone as passionate, knowledgeable and hard-working as Caitlin. The incredible student-athletes of the field hockey program, past, present and future, inspire me regularly and are the driving force behind why I coach.”

“I could not be more excited and proud of Taylor for the opportunity she has earned to lead the Gettysburg College field hockey program,” said Dallmeyer. “We know how lucky we have been to have had Taylor in our program for the last six years. Her impact on and off the field has been tremendous and the support she has given each and every one of our athletes has been transformational for them. Taylor, we thank you for the care, compassion and enthusiasm that you have led with here at Lehigh. We wish you the best as you step into a new role as the head coach at Gettysburg.”

In Dyer’s first season at Lehigh in 2016, the Mountain Hawks won their most games since 2011 (6) while its six home victories were its most since 2004. Lehigh’s final RPI jumped 13 spots, tied for the eighth highest jump in the nation.

Over the years, the Mountain Hawks saw their fair share of short-term success, but all with the bigger picture in mind. The hard work paid off in 2021, as Lehigh put forth the program’s strongest in nearly 30 years and one of the best in program history. Lehigh finished 11-7, 4-2 in the Patriot League (which was tied for second in the league standings). The four league victories were its most since 1996 and most since the league expanded to seven teams with the addition of Boston University in 2013.

Among Lehigh’s victories were home wins over the Terriers and Patriot League finalist Lafayette. The Mountain Hawks advanced to the Patriot League Tournament for the first time since 2011 where they took top-seeded American down to the wire, falling 1-0, but finishing tied in shots (7-7) while holding an edge in penalty corners ( 7-4).

“Being a part of the historic 2021 season this past fall meant so much to me, and it would not have been possible with the trust, commitment and desire our team members brought to the program and to each other,” said Dyer. “It is impossible to acknowledge all those who have impacted me over the past six years, but I will be forever grateful for all that the Lehigh community has taught and provided for me. I am eager to get started at Gettysburg knowing that my time at Lehigh has prepared me well for all that lies ahead.”

Prior to Lehigh, Dyer had coaching experience at his alma mater Tufts and Dickinson (under Dallmeyer).

‘An Arm and a Leg’: Private Equity Is Everywhere in Health Care. Really.