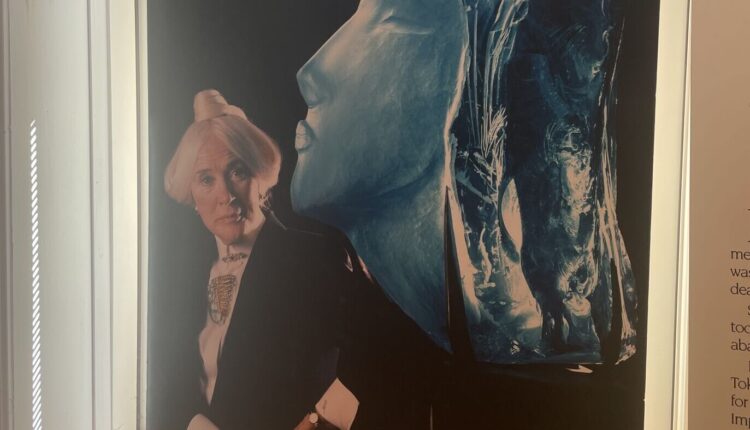 A world-renowned glass sculptor sourced her most famous piece from the abandoned Pennsylvania Wire and Glass Factory in Dunbar where she chiseled a 4-ton, 9-foot-tall hunk of emerald glass into a $3 million work of art.

Suzanne Pascal’s “Seated Torso” found its permanent home in The Dunbar Historical Society’s Pascal Annex alongside 58 of her other pieces, including hand-carved glass, steel sculptures and paintings, said the historical society’s secretary, Donna Myers. Her other famous pieces include a Madonna placed in the Vatican and a wedding gift for Princess Diana.

“The family considers this the repository for her legacy,” Myers said. 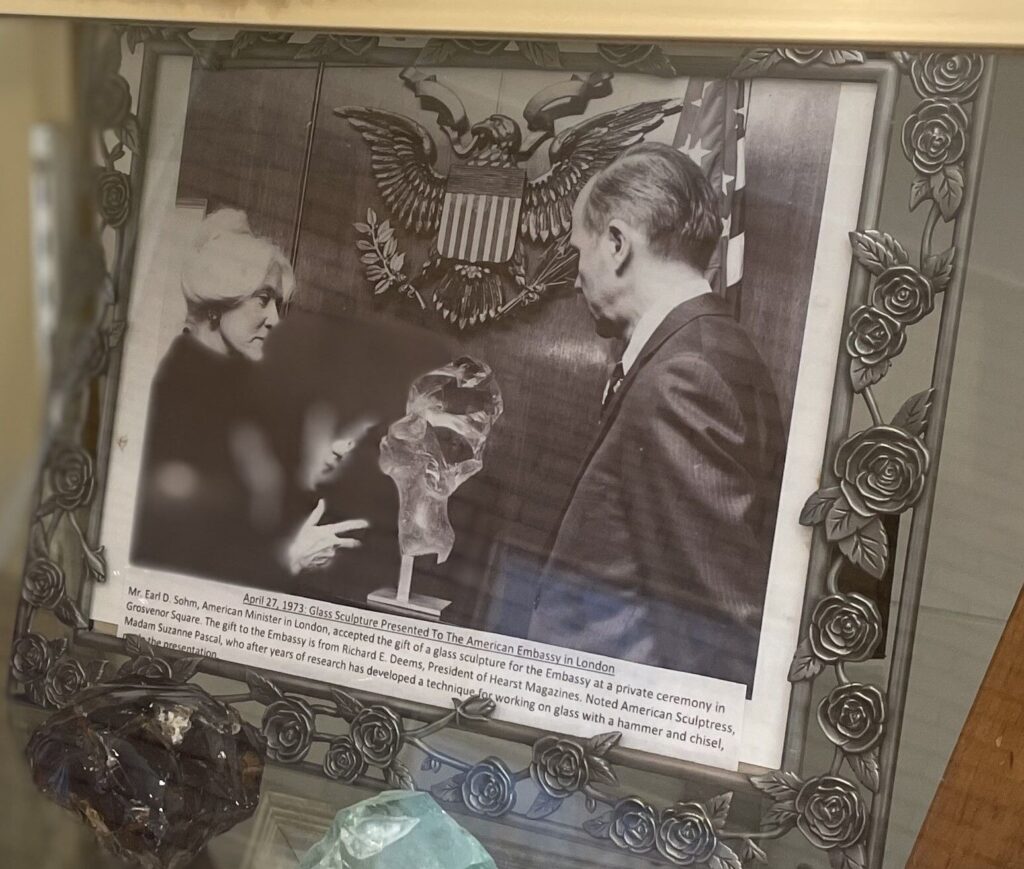 Suzanne Pascal is pictured with Earl D. Sohm, an American Minister in London, when she donated one of her carved glass pieces to the Embassy (Herald-Standard photo).

She tried unsuccessfully for years to carve glass, but she could not find a technique that did not reduce her medium to shards. That all changed in Dunbar when she found the abandoned factory’s last batch of glass tempered due to nine years of exposure on the factory floor. She learned of the glass from a friend and took a trip to Dunbar. She whacked a small chunk of glass with her chisel. It didn’t shatter. She mortgaged her Beverly Hills home for the scrap and moved to a Dunbar motel for two years.

She worked on “Seated Torso” for seven years before she moved it to her yard in Beverly Hills. That required police cordons and a 75,000-ton crane. She completed the piece after 25 years of work at age 72. It sold for $3 million in 1994 and was donated to The Dunbar Historical Society in 2015. The historical society built the annex to hold the 2.5-ton, 7-foot sculpture.

Pascal died in September 2021 at age “107 ½,” her family wrote in her obituary and requested donations to The Dunbar Historical Society.

“They are grateful because there is no other place where you can see her work like this,” Myers said. 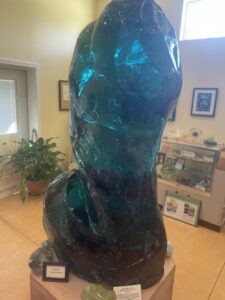 “Seated Torso” is the largest carved glass piece in the world at 2.5 tons and 7 feet high. It was carved by Suzanne Pascal and donated to The Dunbar Historical Society (Herald-Standard photo).

“I think people are surprised when they come in,” Myers said. “They say, ‘I can’t believe you have so much stuff.’ I say, ‘We can’t either.’”

The Dunbar Historical Society is not a museum of hushed voices and barriers to prevent touching the artifacts.

“We try to make it fun. Some places you go in and it’s very quiet. That’s not here,” she said.

Visitors can explore inside the historical society’s beehive coke oven. Myers is happy to take pictures of visitors behind their jail door, or peering through the glass of the Seated Torso.

The Dunbar Historical Society building was the town’s post office from 1903 to 1908.

Another historical piece is a wedding dress made from the silk of a World War II parachute worn by Carmean Maddas in her wedding to James C. Wallace on June 7, 1947. Maddas’ brother was stationed in the Italian Alps during WWII with the Air Corps. Military service members wore white and used white parachutes for camouflage in the snow. Myers found in her research that it was not uncommon for military service members to send parachute material home to sew into wedding dresses.

A collection of antique yearbooks is one of the biggest draws for locals, Myers said.

“When I look around, sometimes I don’t believe it,” Myers said. “We started with one wedding picture.”

Myers said she wanted the historical society to give Dunbar an identity, and for locals to understand their own history.

“We want people to understand their heritage. You can’t get people to be invested in something if they don’t understand it,” she said.

Myers thanked the Community Foundation of Fayette County for including the society in its Fayette Gives campaign. Myers said it is easy for the smaller nonprofits to become lost and forgotten because there are so many.

They do not have a regular funding stream and need donations for their basic recurring expenses, including their website, utilities and operational costs, she said.

Delaware Takes Control in Second Half and Defeats Lehigh 77-64