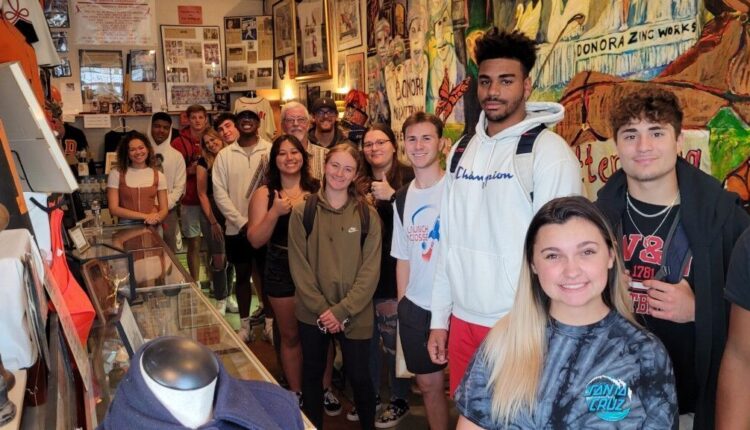 The Donora Historical Society is the oldest in Washington County, dating back to 1946, and since that time has done its best to preserve the borough’s history.

“Some of the original guys were the founding fathers of Donora,” said Mark Pawelec, a volunteer with the historical society since 2008.

That incident, which killed 20 people and caused respiratory problems for 6,000 of Donora’s 14,000 residents, was called by The New York Times “one of the worst air pollution disasters in the nation’s history.”

The official name of the group is actually the Donora Historical Society and Smog Museum.

“We call ourselves the Smog Museum because of that event,” Pawelec said. “That gets us attention from the rest of the world, but we have a rich history on other subjects, such as our historic district, Cement City.”

Cement City is a section of Donora that includes 80 Prairie School concrete residences built in 1916–17. 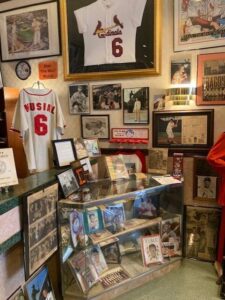 One of Donora’s famous native sons is baseball hall-of-famer Stan “The Man” Musial. A display dedicated to Musial can be found at the Donora Smog Museum (Uniontown Herald Standard photo).

There’s also a rich baseball history, as Donora is the hometown of hall-of-famers Stan Musial and Ken Griffey Jr., as well as Ken Griffey Sr., a member of the legendary Big Red Machine Cincinnati Reds teams of the 1970s.

The museum, located at the corner of McKean Avenue and Sixth Street, houses a number of artifacts that tell the story of the “Home of Champions.” It is open on Saturdays from 11 a.m. until 3 p.m. or by appointment.

“We do get people who contact us, whether it’s a university group or people just passing through that want to stop,” Pawelec said. “That seems to work pretty well for us, making sure people get to see the inside of the museum.”

Donations of items that help tell the history of the borough always are welcome. Anyone interested in making a donation or who wishes to volunteer can call the historical society at 724-823-0364 or email [email protected]

“That’s always a big help,” Pawelec said. “Volunteer help comes in a lot of different capacities. Some people like to do just certain things, whether it’s fundraising or just to be part of our special events. We have people I can contact just to move heavy things. One thing about volunteers, they can do as little or as much as they want. Volunteer help is always something of need for us.”

Paul Paterra is a reporter for the Herald-Standard of Uniontown, Pa. Helping the Helpers is a joint effort of the Uniontown Herald-Standard and the . Readers may email him at  [email protected].