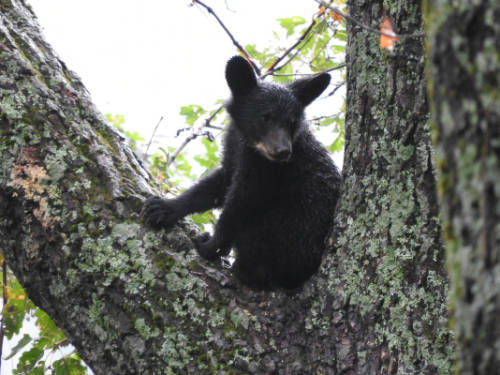 Katrina Shadix flies from her home in a small town in Seminole County, Florida, up to Sussex County, New Jersey every year to see the black bears that roam around the woods. Since 2018, she’s come with her family to witness the creatures, which Shadix regards as a way to “peacefully coexist with the animals.”

If New Jersey resumes the bear hunt, it wouldn’t just take away from the ecotourism she brings to the state and contributes to rural areas, she said, but it would rob her of a highlight of her year to see wildlife in nature.

At an emergency meeting Tuesday of the New Jersey Fish and Game Council, Shadix called it a “disgrace” to bring back the bear hunt.

The council voted unanimously to approve the return of the controversial bear hunt after more than an hour of public comment and less than a week after Gov. Phil Murphy said he had “no choice” but to bring back the controversial practice after an “extreme” spike in human interactions with bears. Department of Environmental Protection Commissioner Shawn LaTourette and Murphy are expected to sign off on the council’s approval, paving the way for a five-day bear hunt in December.

Now activists are vowing to file lawsuits to challenge the hunt’s hasty approval — deemed an emergency by Murphy, allowing the council to hold a meeting so quickly. Former state Sen. Ray Lesniak also said he plans to file a lawsuit this week if the emergency rule is approved by Murphy.

Activists continued calling on the second-term governor to stick to the campaign promise he’s frequently repeated to end the hunt.

“It is shameful that the governor of New Jersey is playing politics with the bear hunt,” said Jeff Tittel, a longtime environmental activist. “My concern is that instead of using sound science, you’re using political science and cherry-picking data.”

According to the Department of Environmental Protection, there were 433 reported bear sightings between Jan. 1 and Oct. 21 — marking a 130 percent jump from the same period in 2021. Nuisance and damage reports also increased 237 percent — 1,538 this year, compared to 457 in 2021.

People have reported 62 aggressive encounters, up from seven in 2021, and one person was attacked this year compared to none in 2021. Residents have reported 12 attacks on dogs, 84 cases of property damage exceeding $1,000, and dozens of home invasions by bears.

As the meeting went on at the New Jersey State Museum in Trenton, authorities about 80 miles north in Ringwood Township were investigating four dead black bears as possible illegal hunting activity, according to NorthJersey.com.

The council cited the statistics as reason to bring back the bear hunt. Council chairman Frank Virgilio called the “regulated bear hunt” the most “effective” way to limit the number of bears and human-bear encounters in the state.

A Flemington resident questioned the validity of the statistics, which are gathered and kept by the council. Activists say people can report the same bear multiple times, and argue hunters may be calling to inflate the numbers to bring the hunt back.

And several residents who spoke and live in what they refer to as “bear country” — Warren, Sussex, and Morris counties — say they don’t mind living among the bears. Some of them even said they moved to that part of the state knowing very well that wildlife will be in their backyard.

“This a tyrannical response to a fabricated problem,” said Annette Batson, a Montclair resident and founder of a local animal advocacy organization.

Environmental agency officials estimate about 3,000 bears are in the northwestern area of the state, which could grow to 4,000 by 2025 if left unchecked.

Most speakers were convinced that despite state funds set aside to control the bear population using non-lethal methods, the council did little with it. Council members pointed to social media blitzes and pamphlets at local businesses, along with a webpage that received 52,000 hits.

Brian Craine, a former resident who has been arrested eight times protesting New Jersey’s bear hunts, urged the panel to reject the plan and further explore non-lethal methods to deal with the creatures. He argued the council violated their obligation to protect wildlife.

Few people who spoke at the meeting were pro-bear hunt. Wade Stein, president of the New Jersey State Federation of Sports, commended the council for their “courage to look at the scientific facts about the black bear population.”

Angi Metler, co-founder of the Animal Protection League of New Jersey who lives in Vernon in Sussex County, believes few hunters came to the meeting because they knew the council would already vote in their favor.

“The fix was in,” she said. “They really want to circumvent public input and the democratic process by doing this at the very last minute. I mean, an emergency that was declared one day after the election — really?”

Several speakers alluded to Murphy’s potential political ambitions — a presidential run in 2024 should Biden choose not to pursue a second term — as explanation for his reversal. Tittel suggested he ended the bear hunt in 2021 to court progressive voters, but his about-face is aimed at courting national voters in hunting states.

“I think that the governor is doing this because as someone who is for gun control, he doesn’t want to be running in Ohio and New Hampshire and Pennsylvania and Michigan being for gun control and being against hunting because that hurts him with the voters.”

A Murphy spokesman previously did not answer questions on the post-Election Day timing of the bear hunt.

The bear hunt has long been controversial in New Jersey. After 30 years without a bear hunt, it was reinstated in 2003 for one season, then again in 2005. Gov. Jon Corzine stopped it in 2006, but his successor, Chris Christie, brought it back in 2010.

While running for governor in 2017, Murphy campaigned on ending the hunt. In 2018, he signed an executive order barring hunts on state property, which accounted for about 40 percent of bears killed during the hunts. At the time, hunts continued on federal, state, municipal, and private property.

In September 2021, he announced there would be “no bear hunt this year, period.” The Fish and Game Council approved that order.

With Tuesday’s motion approved, the first hunt is expected to take place Dec. 5 through Dec. 10. If the population harvested doesn’t reach 20 percent, the hunt extends from Dec. 14 to Dec. 17. Bear hunting will be allowed on state and private lands and designated hunting zones.

The council implemented new rules about which bears can be hunted. Cubs under 75 pounds and bears traveling in family packs with cubs cannot be killed. Hunters also cannot be in possession of a gun or weapon meant to capture black bears within 300 feet of a baited area.

Another meeting will be held early next year to approve a long-term bear management plan, potentially for seven years. The current emergency order expires in January 2023. More details are expected to be released next month, and a public comment period will be held in January as well.

Sophie Nieto-Munoz is a reporter for the New Jersey Monitor, a sibling site of the , where this story first appeared.

Watch: As Health Costs Spike, the Role of Hospitals Often Gets Overlooked