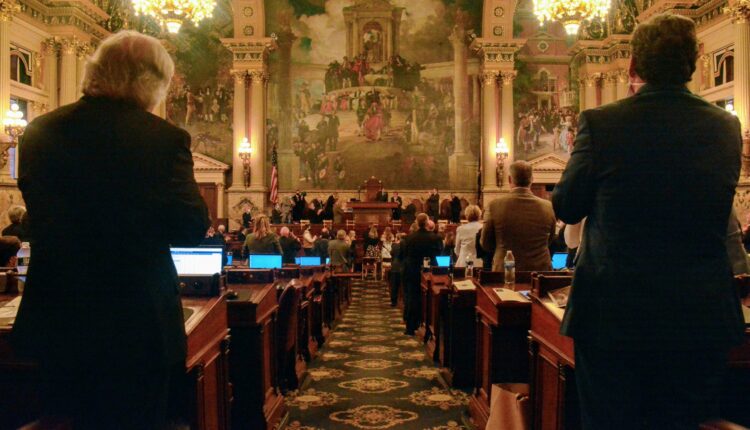 Grocery, gas and housing prices are up this year. The stock market is down. Voters are souring on the economy, and some analysts are warning of a looming recession.

But most state budget analysts aren’t too worried. Tax collections are still coming in strong, and states have saved so much money — thanks to economic growth and a flood of federal COVID-19 aid — that there’ll be plenty to spend on schools, Medicaid and other services this fiscal year.

Take Arkansas, which, thanks to record-breaking tax collections last year and this year, has almost $3 billion in budget reserves. That’s about half what the state spends in a typical year.

Gov. Asa Hutchinson, a Republican, responded to the latest revenue report by calling lawmakers back to Little Rock to pass new tax cuts. The state has so much money that Democrats argue lawmakers also could use the August special session to raise teacher pay.

“I think we’re in a fiscal situation that — it’s not an either-or proposition,” said Senate Minority Leader Keith Ingram, a Democrat. “We can do both.”

Analysts warn that the end of the current boom is in sight. State economists and budget writers expect revenue growth to slow or slightly decline over the next few years. Overall, U.S. economic activity declined in the first quarter of this calendar year, and the Federal Reserve likely will keep hiking interest rates to cool the economy and bring down inflation.

Economists in states such as California and New York are watching the stock market, as a steep fall in capital gains earnings among the ultra-rich could drive tax collections down dramatically. And given the overall economic climate, lawmakers in many states may put forward more cautious spending plans when they reconvene in the new year.

In North Carolina, for instance, Democratic Gov. Roy Cooper recently approved a budget bill that didn’t include much in the way of either new tax cuts or new spending as lawmakers worried about inflation and recession, The News & Observer in Raleigh reported.

But lawmakers don’t need to panic about the cloudy economic outlook, budget experts say. Money raised during past years of prosperity provides a cushion.

“State revenues are just starting at a much higher place than they were before. So there’s room for caution, but not much reason for fear,” said Jared Walczak, vice president of state projects with the Center for State Tax Policy at the Tax Foundation, a Washington, D.C.-based nonprofit.

“Even if we did see a broader economic downturn, states are better positioned for that than they have been in previous recessions,” he said.

Should a recession hit, states have savings that will help them balance their budgets. States are projected to have over $132 billion in their rainy-day funds at the end of fiscal 2022, according to a survey from the National Association of State Budget Officers, a professional organization based in Washington, D.C. That’s up from about $77 billion two years ago.

And though inflation will increase state spending, state experts expect those higher costs to be manageable.

Colorado, however, could be the exception. A 1992 Colorado constitutional amendment called the Taxpayer’s Bill of Rights, or TABOR, limits the growth in state spending to the prior year’s rate of inflation — defined as the consumer price index (CPI) for the Denver metro area — plus the prior year’s estimated population growth. That rise isn’t fast enough to reflect this year’s spike in consumer prices.

“You essentially get a two-year lag between the inflation figures the constitution requires us to use and the actual prices the state has to pay,” said state Sen. Chris Hansen, a Democrat and vice chair of the legislature’s Joint Budget Committee.

Colorado lawmakers likely won’t be able to raise employee pay to keep up with inflation, Hansen said. The same goes for funding for other services, such as schools and colleges, he said.

“What I find frustrating, as a budget writer,” he said, “is that in a moment when we should have adequate resources to make long-term investments that voters want, we’re not going to be able to do it because of this inflationary mismatch.”

He said lawmakers are trying to sort through their options, including exploring whether there’s bipartisan support for a ballot initiative to fix the problem.

In Pennsylvania, where the state ended the 2021-22 fiscal year with a healthy budget surplus, officials made a $2.1 billion deposit into the state’s Rainy Day Fund, which is intended as a hedge against future hard times.

During a stop in York County earlier this week. Gov. Tom Wolf, a Democrat, acknowledged the challenging economic times facing the state and the nation, but noted that the state’s tax collections remain strong.

“I track our revenues on a daily basis by category,” Wolf said. “And July is another strong month now.”

But, he acknowledged, “in a market economy, you do have ups and downs. And eventually a recession is going to come. We’re just not in one now,” said Wolf, who will leave office in January 2023 after serving the constitutional maximum of two, four-year terms.

‘When Is This Going to Stop?’

State budget writers girded themselves for a major recession in 2020, after state and local leaders ordered businesses to close and told workers to stay home to slow the spread of COVID-19.

But the pandemic-induced downturn lasted just two months. Ever since then, tax revenues have been higher than analysts expected. Revenues are still beating expectations, even as the U.S. economy has started to slow.

Michigan collected over a billion dollars in sales taxes in June, the largest one-month haul in state history, according to Jim Stansell, associate director and senior economist for the Michigan House Fiscal Agency, which advises the state House of Representatives.

Michiganders may be complaining about high prices, Stansell said, but they don’t seem to be reining in their spending.

“Even as recently as May, we were projecting that sales tax would be up 9.4 percent in fiscal ‘22,” he said. “We’re up 14.6 percent. That doesn’t sound like people pulling back.”

It’s the same story, Stansell said, with corporate income taxes, which are levied on business profits. Michigan forecasters expected those revenues to rise 7 percent in fiscal 2022. They’ve risen 21 percent so far (while most states started fiscal 2023 on July 1, Michigan will begin in October).

“We’ve been asking ourselves, for the last two years, when is this going to stop?” he said.

Right now, high consumer demand is helping to drive inflation, said David Zin, chief economist for the Michigan Senate Fiscal Agency, which advises the state Senate. Since the pandemic began, many people have built up savings or paid down debt, thanks in part to federal COVID-19 aid. They’ve been spending their extra dollars on everything from houses and cars to vacations.

“If you look at the economy that way, raising interest rates doesn’t even have to mean a recession,” Zin said. “What it does is it takes pressure off producers, where literally demand is exceeding supply.”

Zin said he’s talked to manufacturers who have so many backorders that they could keep operating for a year even if they made no new sales.

Tax revenues remain strong across the board in Colorado, too. The Colorado Legislative Council, a nonpartisan agency that advises the legislature, expects the state to raise 22 percent more general fund money in fiscal 2021-22 than it did in the prior year.

TABOR requires much of the money be refunded to taxpayers. Still, the past few years of growth have created a financial cushion for Colorado, said Greg Sobetski, chief economist for the council.

He said that if a recession were to hit — which his team isn’t forecasting — “we’d be entering the recession from a higher pre-recession peak.”

The prices consumers face today are about 9 percent higher than they were a year ago, according to the U.S. Bureau of Labor Statistics.

Rising prices, while painful for consumers, can be a good thing for state revenues.

“A period of high inflation can mean that, at least temporarily, state coffers are better off even as taxpayers, or consumers, are worse off,” Walczak said.

Oil prices have since dropped, which has muted the fiscal 2023 forecast, said Dan Stickel, chief economist at the Alaska Department of Revenue. But the outlook is still pretty good.

“We’re probably looking at a lower-than-expected surplus at this point, as opposed to a deficit,” he said.

Nationwide, inflation also will affect state spending on goods and services, but the precise effects aren’t yet clear.

“We’re getting geared up to start legislative hearings on the budget that will start on July 1, 2023,” said Robert Brech, Arkansas’ state budget director. “I think there will be more pressure on that budget because of inflation. We just don’t know yet how that’s going to play out.”

Lawmakers could face higher prices for infrastructure projects, for instance. Colorado state Sen. Bob Rankin, a Republican who serves on the Joint Budget Committee, said his committee recently got a preview of how rising construction costs could affect state spending.

“The first thing I said to myself was: ‘Oh boy, here’s what’s coming,’” Rankin said.

Everything You Need to Know About Paxlovid — Especially, Should You Take It?