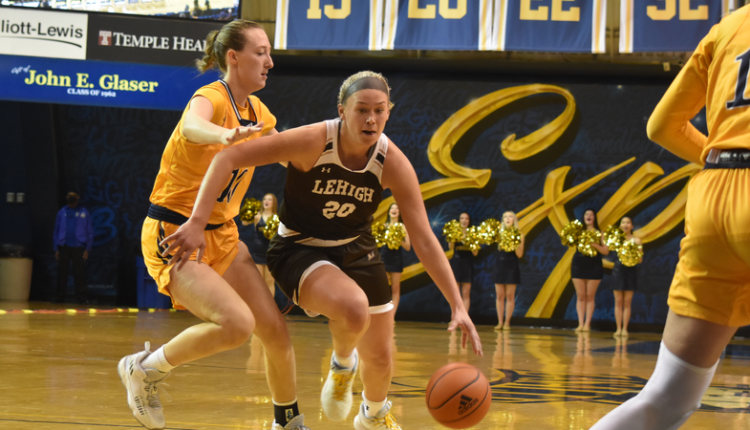 Delaware Takes Control in Second Half and Defeats Lehigh 77-64

The Blue Hens improved to 6-4, while the Mountain Hawks dropped to 3-7. This was Lehigh’s first game since Dec. 3 due to final exams.

It was a back and forth first quarter. The Blue Hens ended the quarter on a 6-0 run to tie things at 23.

The Mountain Hawks took control in the second quarter, outscoring the Blue Hens 23-16.

Mackenzie Kramer knocked down a jumper to put Lehigh up nine with 51 seconds to go in the first half, which was Lehigh’s biggest lead of the game.

Delaware responded with a bucket by Makayla Pippin to cut Lehigh’s lead to 46-39 at the half.

The second half is where Delaware took over. Lehigh was shooting 38.75% from beyond the arc in the first half and finished the game 11-of-41 from deep. Delaware was 5-of-11 from the three-point line. The Blue Hens outscored Lehigh 40-21 after halftime.

“We’ve got to make shots,” said head coach Addie Micir. “I thought we got a couple of clean looks in our first five possessions, but we didn’t knock them down. It’s one of those things where we have to find a way to work through it and find a way to score even when shots aren’t falling. I think you have to credit Delaware. They came out tough and ready to go in that second half.”

The Blue Hens controlled the paint for the full 40 minutes. They had 46 points in the paint, and Lehigh only had 12. Delaware also had a 47-36 edge in rebounds.

Frannie Hottinger finished with a team-high 20 points, and added 11 rebounds, for her fifth double-double of the season. Ella Stemmer had 14, Kramer scored 11, and Jamie Behar recorded a season-high of 10 points.

“We’ve got to find a way to get better there, and that’s with ball pressure and post defense, and that’s something we’re going to continue to work on,” Micir said.

Tara Cousins ​​(15 points), Pippin (14 points) and Jewel Smalls (13) were the other Blue Hens to finish in double figures.

The Mountain Hawks have one final non-league game remaining. They will head to New Haven, Conn, to take on Yale on Wednesday at 6 pm The game will be broadcast on ESPN+. Lehigh will then open Patriot League play at home against Army West Point, Friday, Dec. 30 at 2 pm

“We’re going to break down this film tonight and see what we need to get better at, and after that, its eyes forward to Yale,” Micir said.

The best – and worst of times – a tale of two Pa. transitions | Fletcher McClellan