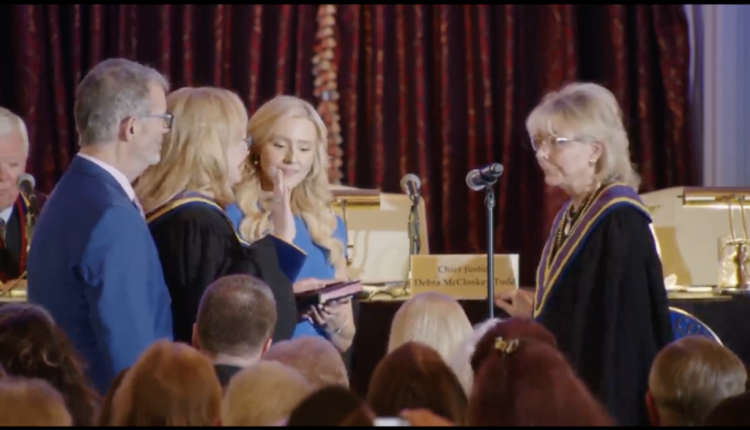 PITTSBURGH — Debra McCloskey Todd was sworn in as chief justice of the Pennsylvania Supreme Court on Friday, the first woman elected to the post in the court’s 300-year history, at a gathering in downtown Pittsburgh that was part formal ceremony, and part celebration of her career and her accomplishments.

The program included Gov. Josh Shapiro and Duquesne University President Ken Gormley, who spoke of Todd’s brilliance as a jurist, and her friends and family, who told tales of her skill as a fire baton twirler and passion for the law, even as a young girl.

Shapiro called Todd, 65, a graduate of Chatham College (now Chatham University), and the University of Pittsburgh Law School “western Pennsylvania through and through.”

“She’s got that steel worker sensibility… she is a distinguished public servant,” he said. “The chief has made Pennsylvania better through her wisdom, her leadership, and most importantly, her heart.”

Shapiro recalled his own swearing-in ceremony on Tuesday, and described how Todd helped him feel less nervous.

“I was feeling the heaviness of the burden that was about to be bestowed on me, until the chief stood up to give me the oath of office. Her smile and her rendition of an otherwise pretty straightforward oath immediately took the pressure off the moment and allowed me to just enjoy it and relax for a moment. That’s the Todd effect,” Shapiro said.

“She allows those around her or across from her to be their best, to find the best inside themselves, because they know they are before Chief Justice Todd. And so as the court enters its 301st year of meaningful work, let it positively be impacted by the Todd effect, as we make history here in the Commonwealth of Pennsylvania.”

Todd moved into the chief justice role earlier than planned, after the unexpected death of then-Chief Justice Max Baer in September.

Todd’s swearing-in was therefore delayed several months at her request, to not interfere with the mourning period for Baer. She said before his death, Baer had been helping prepare her for the role.

“It is because of that generosity that Max displayed along with the generosity his staff displayed that we have had a very smooth transition of Chief Justice administrations,” Todd said after taking the oath of office.

Baer, 74, who was first elected to the state’s highest court in 2003, and became chief justice last year after Chief Justice Thomas G. Saylor retired, died at his home in suburban Pittsburgh on Sept. 30.

Todd was first elected to the Supreme Court in 2007, when there were two vacancies created by the retirement of Justice Sandra Schultz Newman, and the non-retention of Justice Russell Nigro in 2005. Todd was retained for a second, 10-year term in 2017.

Before her election to the high court, Todd was a Superior Court judge from 1999 to 2008. She earned a law degree from the University of Pittsburgh in 1982 and then worked as a litigation attorney for U.S. Steel for five years before going into private practice until she became a judge.

As a Democrat, Todd has generally voted with the progressive wing of the court, including in a July 2020 decision ruling against Republican lawmakers who sued to reverse Gov. Tom Wolf’s pandemic shutdown orders.

Todd broke away from the five-justice liberal majority in 2020 when she joined conservative Justices Kevin Brobson and Sallie Updyke Mundy opposing the selection of a congressional map favored by Democrats.

Todd said  Friday that she owed at least part of her success to her high school classmates at Lincoln High in Ellwood City, in Lawrence County, who voted her “most likely to succeed” during her senior year.

“I never wanted to let them down,” she said. “Abraham Lincoln once said ‘I’m a success today because I had a friend who believed in me, and I didn’t have the heart to let him down.’ And how true those words are– never underestimate the value of a kind word of a vote of confidence.”

“Many years ago, the legal profession was a man’s world. Thankfully that has changed,” she said. “But I want to point out that in striving for success, there is no reason to be anything other than who you are. You can be tough without being a bully. You can be kind without being weak.”

Despite the 2004 book titled “Nice Girls Don’t Get the Corner Office,” Todd said that wasn’t necessarily the case.

“As the newly installed Chief Justice of Pennsylvania, I can tell you nice girls do get the corner office,” she said.

Lehigh to take on Rival Lafayette in 104th meeting on Saturday