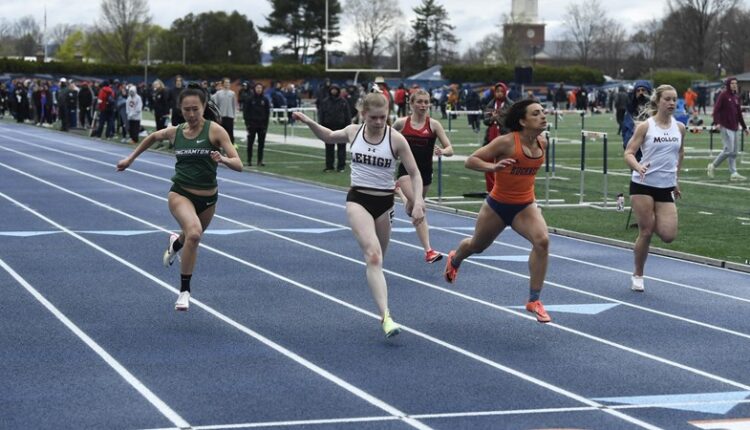 The Lehigh women’s track and field team earned points in 15 of the 22 events this weekend, finishing with a total of 94 points. The Mountain Hawks finished fifth overall, with host-school Navy winning the championship with 281.50 team points.

“I’m really proud of our seniors,” said head coach Matt Utesch. “We had the most miserable conditions in my 25 years of Patriot League competition but in spite of those issues, our student-athletes remained calm and focused.”

She won the 100m with a time of 12.23. Congratulations Melissa 🎉 pic.twitter.com/RId4ztOCe7

In the field, two jumpers and one thrower secured team points for Lehigh. Sophomore Nina Cialone led the way with a new school record in the triple jump. Cialone finished fourth overall with a mark of 11.90m.

Junior Calista Marzolino earned a spot on the podium with her second-place finish in the high jump. Marzolino finished Saturday with a new PR of 1.68m to become tied for second all-time in Lehigh history.

Senior Teasha McKoy competed in her final Patriot League Championship as a Mountain Hawk. McKoy finished fourth in the discus with a mark of 42.63m.

The Mountain Hawks continued to put up solid times on the track on Saturday. In the 400m, sophomore Jordyn Hock finished fifth overall with a new personal record of 56.67. Hock is now second all time. Graduate student Kaja Skerlj competed in the 400m hurdles where she finished fifth with a time of 1:03.21. In the 100m hurdles, junior Ashley Griesmeyer also earned points for Lehigh. She finished eighth with a time of 15.30.

Lehigh’s relay teams had solid performances on Saturday. The 4×100 relay finished fifth overall. Cunningham and Griesmeyer ran alongside senior Camari Griffin and fellow first-year Stephanie Webb to finish the race with a time of 49.44. The 4×400 relay team finished sixth with a time of 3:57.37. The team consisted of Hock, Griffin, Skerlj and senior Julia Dorley.

After competing in the relay and 100m, Cunningham went on to secure a bronze medal in the 200m on Saturday. She finished third with a time of 25.14.

The Mountain Hawks’ middle distance and distance runners continued to finish their races with impressive times. In the 800m, seniors Jade Sessions and Hetty McMillan finished second and third, respectively. Sessions finished with a PR of 2:10.88 to become fifth all-time while McMillan finished with a time of 2:11.96. Dorley also competed in the 800m, where she finished sixth with a time of 2:14.18.

Yakaboski went on to race in the 5000m where she finished with her second PR of the weekend. The sophomore finished 11th with a time of 17:08.73 to become fifth all-time.

In the heptathlon, senior Carly Carpino finished her final Patriot League Championship with a new PR. Carpino finished fifth overall with 4,447 points to become eighth all-time. On Saturday, the senior earned an individual personal record in the long jump (5.45m) where she finished first.

Lehigh will send a group of student-athletes down to Williamsburg, Va. for the ECAC Championships next weekend. Competition will begin on Friday, May 13 and end on Sunday, May 15.