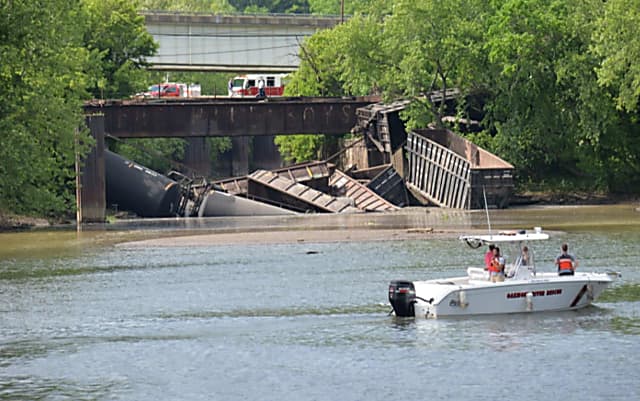 Injuries have been reported at trail derailment in Allegheny County, officials say.

A Norfolk Southern train struck a construction vehicle along the tracks at 2400 Freeport Road in Harmar Township around 3 pm on Thursday, May 26, according to Allegheny County Emergency Management.

Eight or nine train cars carrying train crude oil were among the 17 train cars that derailed, and approximately eight cars landed in the Deer Creek and the Allegheny River, according to emergency management officials’ statement to the press.

“It will take weeks to clean up,” officials said in a statement to media.

Pennsylvania Coast Guard, the state Fish and Game Commission, the Environmental Protection Agency, multiple hazmat crews, and about a dozen local fire and emergency crews responded, according to emergency management.

The oil and hydraulic fluid leaks are being plugged and boons are being used to contain the spill, officials say.

Traffic in the area continues to be detoured to Powers Run, Fox Chapel, and Guys Run roads.

The number of people hurt and the full extent of their injuries remains unknown.