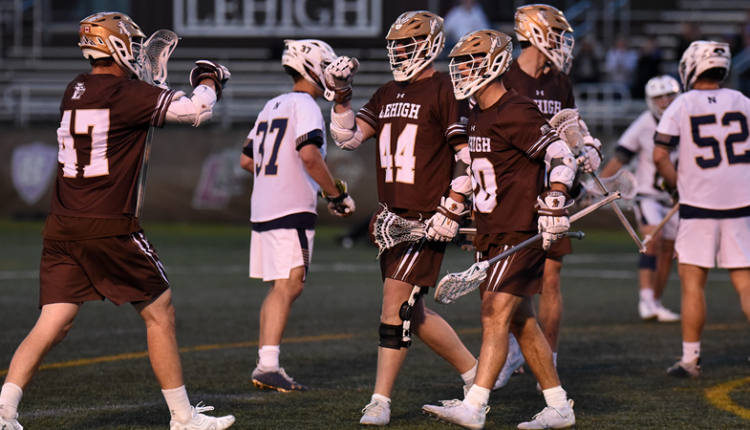 BETHLEHEM, Pa. – The fourth-seeded Lehigh men’s lacrosse team jumped out to a 4-0 lead and wouldn’t look back, cruising to a 14-8 win over fifth-seeded Navy in the Patriot League Quarterfinals on Tuesday evening at the Ulrich Sports Complex. Senior Tommy Schelling was sensational, tallying four goals and four assists. Senior James Spence continued his strong play as of late, stopping 13-of-20 shots sent his way. With the win, Lehigh will play at top-seeded Boston University on Friday at 4 pm on CBS Sports Network.

“It’s nice to win. The last couple weeks have been really tough,” said Lehigh head coach Kevin Cassese. “Three one-goal losses, a couple overtime losses. It was nice to see our guys bounce back, especially against a tough opponent like Navy.

“With the service academies, any time you play Navy and Army, you have to ‘bring it,'” said Cassese. “There’s nowhere to hide on the field. You really have to bring every ounce of energy that you have.”

— Lehigh Lacrosse (@LehighLacrosse) May 4, 2022 The Mountain Hawks did just that. Schelling’s eight points were one from tying a career high. In the process, he moved into seventh place in program history for career points (currently 174), passing Jeff Jenkins (who recorded 172). Junior Christian Mule’ added two goals and two assists, while senior Cole Kirst tallied two goals and an assist. Junior Justin Tiernan scored twice as well, while sophomore Scott Cole had two goals and an assist.

Senior Mike Sisselberger was presented his Patriot League Faceoff Specialist of the Year award pregame, and enjoyed a strong bounce back effort, winning 15-of-23 faceoffs with 10 groundballs. That gives him 308 career groundballs, becoming just the third player in program history to eclipse the 300 GB mark.

The Mountain Hawks jumped out to a 4-0 lead with goals from Schelling, Tiernan, Cole and Mule’. Mule’s was a highlight-reel score, somehow finding a way to catch a high pass, and in one motion finding the back of the net.

— Lehigh Lacrosse (@LehighLacrosse) May 4, 2022 Navy answered with the next two and three of the next four, but Kirst scored consecutive goals in the span of 47 seconds of the second quarter (at the 5:37 and 4:30 marks ) to give Lehigh a 7-3 lead. The Mids responded with two straight, but Tiernan finished his second, assisted by Mule’, to give the Mountain Hawks an 8-5 halftime lead.

Back to back goals for COLE KIRST 🔥

— Lehigh Lacrosse (@LehighLacrosse) May 3, 2022 After the teams traded goals early in the third quarter, a 5-0 Lehigh run erased any doubt. Schelling scored three of the goals in that run, including the final two, to give the Mountain Hawks a 14-6 advantage at 6:13 of the fourth. Navy scored two late, but this came after the Lehigh defense held the Midshipmen scoreless for a stretch of 20:05.

Final shots were 42-40 in favor of Navy while the Mountain Hawks held a 45-36 edge in groundballs. Navy was 3-for-6 on the extra man, while Lehigh was 0-for-2. After Spence made 13 saves, junior Caleb Creasor entered and made one over the final 4:19. Navy’s Pat Ryan finished with 10 stops.

— Lehigh Lacrosse (@LehighLacrosse) May 4, 2022 “I’m proud of our guys,” said Cassese. “We’ve now beaten the service academies three times [this season]. To beat Navy twice in one year is really hard to do. I have a lot of respect for their team, a lot of respect for their coaches and I’m proud of our guys for the effort they put forward today. We’ve been trying to get a complete effort – offensively, defensively and between the lines – and I think tonight might have been as close to it as we’ve had all year.”

The Mountain Hawks have advanced to the Patriot League Semifinals for a fourth straight season and will play at top-seeded and No. 16 ranked Boston University on Friday at 4 pm, with a berth in Sunday’s championship game on the line. Friday’s game can be seen on CBS Sports Network.

“Hopefully, we’re starting to peak at the right time,” Cassese said. “We’re going to need to be great on Friday when we take on Boston University. They’re a great team. Hopefully we can take a little bit of the momentum we had tonight and bring that with us up to Beantown.”