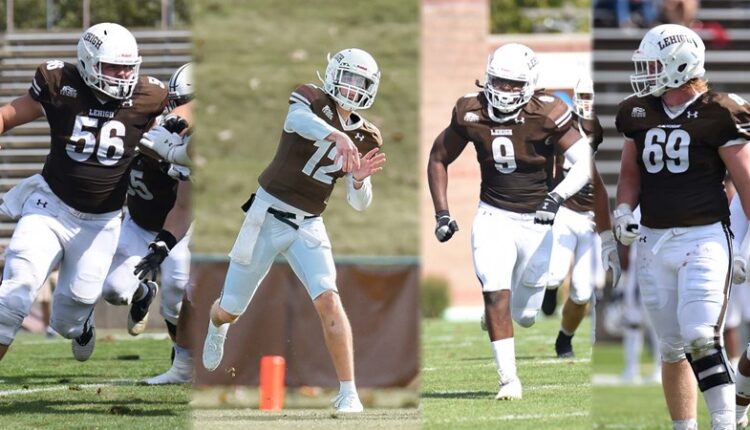 BETHLEHEM, Pa. – Lehigh head coach Tom Gilmore has announced the four student-athletes who have been selected by their teammates to lead the Mountain Hawks’ football program in the 2022 season. Senior defensive linemen Dean Colton and Mikhari Sibblis, junior offensive lineman George Padezanin and junior quarterback Dante Perri and have been selected to lead Lehigh in the upcoming campaign.

“It has been exciting to see these four men mature into these roles,” Gilmore said. “They are respected by their teammates and coaches as competitors and leaders and I look forward to working with them as we continue to re-establish a championship culture within our program. I expect to see other leaders stepping up with these captains to set the right tone for the team to make significant improvements in our preparations for the upcoming season.”

Sibblis is a 2021 second team All-Patriot League honoree who has started all 25 games in his Lehigh career. He led the Mountain Hawks with 4.5 sacks a season ago and ranked third on the team with 47 tackles. A HERO Sports Freshman All-America as a first-year in 2019, Sibblis has 75 career tackles and 8.5 sacks.

Colton appeared in seven games in 2021 with five starts on the defensive line. He finished with 12 tackles and 3.5 tackles for loss. A veteran of 17 games over three seasons, Colton has 24 tackles, 5.5 tackles for loss and 1.5 sacks.

Padezanin started all 11 games at center for the Mountain Hawks last season where he served as one of Lehigh’s most consistent offensive linemen. He was the only offensive lineman to start every game at the same position in 2021. Padezanin won the Best Offensive Lineman award the year-end banquet.

Perri started six games at quarterback in 2021 including each of the last five. He quarterbacked Lehigh in all three consecutive victories to close out the season. In nine games overall, Perri completed 60 percent of his passes for 1,383 yards with five touchdowns and five interceptions. Perri threw for 686 yards with three touchdowns and one interception over Lehigh’s season-ending three-game winning streak.

The Mountain Hawks will open preseason camp in early August leading up to the season opener at Villanova, set for Friday, Sept 2 at 6 pm Lehigh will open its home schedule on Saturday, Sept 17 when the Mountain Hawks welcome Richmond to Goodman Stadium . Season tickets and flex plans for the 2022 season are on sale and can be purchased at LehighTickets.com or by calling 610-7LU-GAME during business hours.

Changes coming to Farrington Square, the Mail Center, and Bookstore