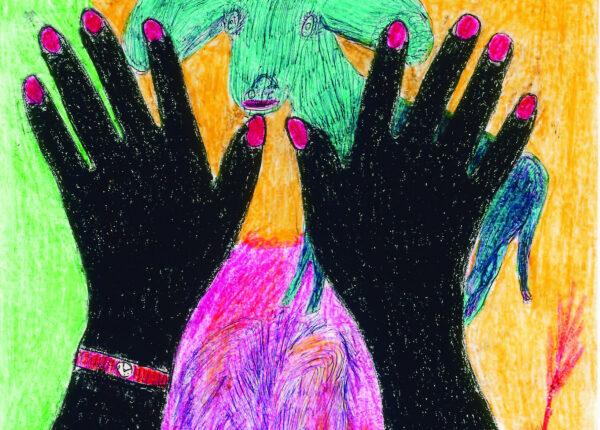 Exploring themes of girlhood, play, and spirituality, the exhibition contextualizes Rowe’s practice as a radical act of self-expression and liberation for a Black woman artist in the Jim Crow–era South.

Nellie Mae Rowe was a self-taught artist born in rural Georgia at the turn of the twentieth century. Discovering her passion for art-making early on, Rowe produced drawings and cloth dolls as a child. While the demands of her family farm, an early marriage, and decades of employment as a domestic laborer delayed Rowe’s artistic journey, she was able to return to her art after the deaths of her second husband and her longtime employers in the 1960s. As a result, Rowe produced an immersive, idiosyncratic, and exuberant body of work.

On view at the Brooklyn Museum from September 2, 2022, to January 1, 2023, Really Free: The Radical Art of Nellie Mae Rowe situates Rowe’s highly personal body of work as a profoundly radical undertaking by a Black woman artist determined to create her own life and aesthetic in the Jim Crow–era South. Organized in eight sections, the exhibition features more than one hundred works emphasizing the breadth and importance of her practice in the American art canon. Incorporating everyday and often recognizable materials into her assemblage, Rowe harnessed accessible means of production to assert her creative independence, recycling cast-offs to make handmade dolls and chewing gum sculptures.

Really Free is organized by Dr. Katherine Jentleson, Merrie and Dan Boone Curator of Folk and Self Taught Art at the High Museum of Art, Atlanta, from the High’s leading collection of Rowe’s artwork. The Brooklyn Museum iteration is organized by Catherine Morris, Sackler Senior Curator, and Jenée-Daria Strand, Curatorial Associate, Elizabeth A. Sackler Center for Feminist Art, Brooklyn Museum. The Brooklyn Museum presentation emphasizes the legacy of Rowe in New York City, which began with a solo show at the Parsons-Dreyfus Gallery in 1979. Three years later, Rowe’s drawings debuted at the Brooklyn Museum as part of the landmark exhibition Black Folk Art in America: 1930-1980. In 1999, she was the subject of a retrospective at the American Folk Art Museum, which, along with the William Louis Dreyfus Foundation and the Judith Alexander Foundation, has loaned works to this expanded presentation of Really Free, nearly doubling the size of the High Museum’s original exhibition.

“Nellie Mae Rowe is one of the most important self-taught artists of the twentieth century, and we are proud to be able to introduce the depth of her creativity to our visitors and expand canonical ideas of art history and artistic value. Furthermore, this exhibition significantly builds on the Museum’s legacy as a champion of twentieth-century folk artists,” says Catherine Morris, Sackler Senior Curator, Elizabeth A. Sackler Center for Feminist Art, Brooklyn Museum. “The presentation offers a unique opportunity to examine Rowe’s legacy and impact through radical impulses that remain undoubtedly a feminist.”

Though Rowe rarely engaged with political topics directly, her work was shaped by the cultural, social, and political forces that defined her experience as a Black woman in the South. Subtle social commentary can be seen in selections such as Untitled (Pig on Expressway) (1980), a brightly colored scene centered on a brown pig that seems overwhelmed by the busy interlocking roads and highways. In this illustration of gentrification and urban sprawl, Rowe nods to the upheavals experienced by her community after Atlanta’s Interstate 285 was completed in 1969.

Rowe remains an integral figure in the ethos of twentieth-century artists who created “yard art” and built environments. In addition to Rowe’s autobiographical drawings, photomontages, and experimental sculptures, the exhibition features two miniature models of her “Playhouse.” The artist transformed her longtime home and yard into an extraordinarily built art environment. Reflecting her aesthetic of abundance, she filled pots and urns with plants, embellishing them with strands of artificial blooms; she positioned handmade dolls on chairs in her yard and strung garlands and clotheslines from tree branches, hanging them with Christmas ornaments, children’s toys, plastic fruit, and other items. The Playhouse became an ever-changing work of art that served as a place for social interaction among many curious visitors. Though it was demolished shortly after Rowe’s death, as her neighborhood succumbed to gentrification, the Playhouse’s legacy lives on in her drawings and in photographs taken by visitors, important examples of which are on view. Models of the Playhouse were created for a film about Rowe’s life, titled This World is Not My Own, produced and directed by Opendox and premiering in late 2022.

“Rowe’s artistic practice was fueled by a desire to reclaim creative visions that emerged during her Jim Crow–era childhood and to achieve self-liberation within the complex cultural climate of the post–civil rights era South,” says Jenée-Daria Strand, Curatorial Associate, Elizabeth A. Sackler Center for Feminist Art, Brooklyn Museum. “The act of a Black woman inviting people into her own home was a radical and brave one for its time. She was demanding to be seen on her own terms.”

The Brooklyn Museum’s presentation is the largest in the national tour and the first showcase of Rowe’s oeuvre in the Northeast since 1999. Further stops on the exhibition tour, funded by the Art Bridges Foundation, include the Hunter Museum of American Art (Chattanooga, Tennessee) , California African American Museum (Los Angeles, California), Montgomery Museum of Fine Arts (Montgomery, Alabama), and Lehigh University Art Galleries (Bethlehem, Pennsylvania).

Support for this exhibition and publication is provided by The Andy Warhol Foundation for the Visual Arts.

Major funding for this exhibition and publication is provided by The Judith Alexander Foundation.

Generous support for the national tour is provided by Art Bridges.