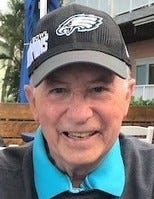 Charles Dale Hartshorne, age 86, of Telford, PA passed away on April 18, 2022 surrounded by his loving family. Born on July 28, 1935, in Abington, PA, Dale was the youngest son of Alfred and Helen Dunavan Hartshorne. After graduating from Abington High School in 1953, Dale studied at Lehigh University, earning a Bachelor of Science degree in engineering. As an expert marksman both in high school and college, Dale led his rifle teams to win many championships. In 1957, he joined the United States Air Force where he served proudly for 3 years, with deployments in the US and in Izmir, Turkey. Upon discharge, he launched his successful career in industry, eventually joining Merck Sharpe & Dohme where he spent thirty years. He began in the engineering department in the 1960s, and shifted focus in 1978 to specialize in public relations, serving as a government liaison. His keen intellect and strong communications skills were matched by his amazing ability to use humor to put everyone at ease.

Dale thoroughly enjoyed his work but his fondest career highlight was co-founding the Merck Ski Club. Dale was an excellent skier and introduced hundreds to the sport through group trips to Colorado every year for fifteen years. The favorite was always Aspen and if you were lucky enough to have been on one of Dale’s famous trips, you will remember the adventure for a lifetime. Dale was also an avid hiker, spending time in the Swiss Alps for several summers. He later took up cycling, traveling across the French countryside. After retirement, Dale spent winters in Stuart, Florida, pursuing his love of golf. While in Florida, he continued to be an avid sports fan, proudly donning his Eagles and Phillies gear for all to see.

Dale had a profound love of country and community service. He served on the Planning Commission and Board of Supervisors of Hilltown Township in the late 60’s and early 70’s. Dale founded the Transportation Management Association of Montgomery County which worked with other nearby counties to promote ride-sharing and smarter solutions to traffic and pollution in the region. He was an avid follower of the stock market and taught evening classes at Souderton High School to adults getting started. In addition, Dale delighted in teaching elementary students in the Pine Run Elementary enrichment program the ups and downs of investing through a stock market simulation game of his own invention.

Dale is survived by his loving wife, Joanne “Jodie” Mohr Hartshorne, to whom he was married for 27 years. He is also survived by his three beloved children, who were his greatest pride: James (wife Linda), Suzanne (partner Nancy Nase) and Scott (wife Melissa); their mother and Dale’s former wife, Anne Turner; his granddaughter, Erica, and his great-grandchildren, Gavin and Kendall. Dale is also survived by his sister-in-law, Evelyn Hartshorne; niece, Nancy Pastorak (husband David); and Nephews, George and Fred (wife Tammy) of Ohio. He was preceded in death by his brother Frank, his sister June Hartshorne Nickerson, and his nephew Glenn Hartshorne.

A kind and sincere man, Dale was cherished by all who knew him. A fantastic father, a wonderful husband, and a loyal friend, he provided wise advice to the many who sought his counsel. He blessed everyone he met with the gift of a witty story, finding common ground and never failing to make others feel welcome and respected. Dale found the secret to enjoying life’s journey which will be his legacy: unending optimism and the desire to spread joy to others.

In lieu of flowers, donations in Dale’s honor are being accepted at the Bucks County SPCA, PO Box 277, Lahaska, PA 18931. A Celebration of Life gathering will be held on Wednesday, June 22, 2022, at 10 AM at Wayside Chapel in Whitemarsh Memorial Park, 1169 Limekiln Pike, Prospectville, PA 19002. Further updates on this event will be posted on the Sadler-Suess Funeral Home memorial website in the name of Charles D. Hartshorne. (https://www.sadlersuessfuneralhome.net).

Published in The Intelligencer

At US Hospitals, a Drug Mix-Up Is Just a Few Keystrokes Away