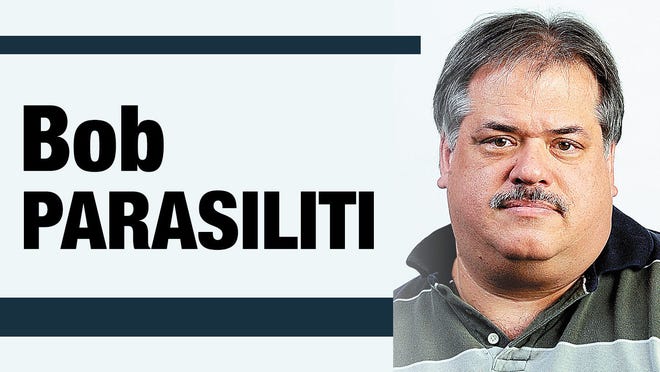 It was certainly a change of pace

Driving down the dusty, gravely back path to the “Leopard Bowl,” there were cars and people as far as could be seen on Friday.

That bowl — the area at the bottom of the infamous hill behind the high school where all of Smithsburg’s athletic fields are located — was a haven of activity.

Purple and blue were the colors of the day as Smithsburg hosted Clear Spring for a softball/baseball doubleheader.

Meanwhile, Smithsburg’s tennis team was also in competition while the Leopards’ lacrosse, track and JV teams were interspersed between and around the practicing action for their next challenges.

This would be considered a usual spring sight on most days, but this one seemed a little more breathtaking.

Get the picture?:PHOTOS: Clear Spring at Smithsburg baseball/softball

First, consider the teasing weather of the season.

One day it’s cold, rainy, snowing, wet and miserable. On Friday … well … it was normal.

Or as normal as anyone could dream. No one was ripping down the grandstands to build bonfires.

Second, it was a banner day for Smithsburg for activity.

With all the wet weather, the Smithsburg fields usually are prime property for a lily pond.

On this day, the was no hydroplaning involved.

And third, just to make it more tantalizing, one of the best pitchers in the area was performing on the softball field in a co-billing with the baseball game, featuring two of the county’s better teams.

Clear Spring’s Chloe Hess held court as she toyed with the struggling Leopards.

The senior, who will be performing for Lehigh University next spring, pitched four innings in the Blazers’ 18-0 win, halted after five because of the 10-run rule.

It was safe to say Hess dictated the action, allowing one hit and a walk to go with 12 strikeouts.

Breaking it down, the hit was the only ball Smithsburg put in play in Hess’ stint. The 12 punchouts took care of every out the Blazers needed to record.

Just as dramatic, tucked away in the back of the complex, was the baseball game.

Clear Spring, which has methodically disposed of most comers this season, was pitted against rejuvenated Smithsburg in the latest edition of the area’s more traditional small-school, Class 1A matchups.

Baseball has been a tough game to play this spring. The rain and cold have knocked the schedule off kilter, making it tough for any team to show any continuity.

Yet, the Blazers and Leopards put on a show as the Leopards threw a monkey wrench into the Blazers “machine.”

With Clear Spring forced to play catchup, Smithsburg tightened the screws the way plucky teams do. The Leopards used walks and errors to get the big hits — and some better baserunning — to knock out Clear Spring 11-1 with two outs in the sixth.

The contrast between the two teams was telling.

The Blazers were stoic while wearing their game “business suits.” On this day, their game of fundamental soundness hiccuped.

The Leopards were a loose bunch — something the early runs didn’t hurt — and they rode the enthusiasm to get under Clear Spring’s skin a little.

But maybe the most striking thing about the day was around the outskirts of the field.

The surroundings were rather electric.

There was the usual large contingent of parents — maybe even more than usual — camped out in the standard-issued collapsible coach’s chairs.

Fitting, because they looked like directors on a movie set. Most seemed to be on the edge of their seats for this one, though.

The biggest addition to the scene, though, was near third base on the far side of the Smithsburg dugout.

It was an unusually large contingent of the student body there to give moral — and vocal — support to their team.

To be honest, that’s something out of the norm for spring sports. Very few students — outside of siblings and girlfriends — normally show up for games. They either are competing in a sport of their own or off doing something else because they aren’t cooped up indoors.

They were a great help to the Leopards. The students gave Smithsburg a true home-field advantage, basically by outnumbering the Blazers.

And to be honest, Smithsburg seems to have a good thing going. All their sports this season have a strong, consistent group of students out to cheer their teams.

The description above is all a way to say there are actually some things that are still right in the world.

There’s been a lot of talk — especially in this corner — about the constant change and different emphasis caused by the COVID-19 shutdown and a change of civility of people in general.

In the middle of all our “progress” was a sporting event played like it used to be — a friendly, fun competition between two pretty good teams.

It was all like it was three years ago before time marched on, all roughshod over us.

There was only one change here. The fact that it seemed like nothing changed at all.

Thus, the change of pace.