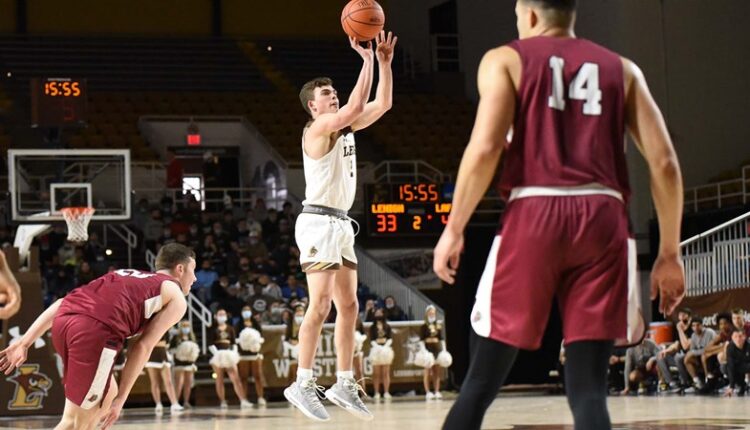 He also took invaluable life lessons along the way.

“Being the youngest person in the firm by far, I was able to mature on a daily basis just by being around people who had been in the work force for seven years and know what they’re doing,” he said. “I was able to ask the right questions and had to get over my hesitation to feel uncomfortable. New York City is a very high-paced, uncomfortable, demanding, strenuous, stressful city. People demand instant results, people demand a lot and they demand hard work at all times.”

Sound familiar? It does for Betlow and so many Division I collegiate student-athletes, who thrive on all those adjectives.

For some time, Betlow – a finance major, had his heart set on completing a summer internship leading into his senior year. He would have to miss much of the full-team summer session together, but the Lehigh basketball coaching staff was very understanding and accommodating.

“About a year ago, I started looking for an internship with my dad and through my own means,” said Jake. “It’s not as easy to find, being a basketball player and having 11 months out of your year tied up with a crazy schedule. I sat down with Coach Reed and told him I wanted an internship for my rising senior year and I wanted to further my career so when I graduate, I have options outside of basketball.

“Coach Reed was nothing but supportive and was excited for my future.”

Betlow’s future is bright because of experiences like at iCapital, which focuses on alternative investments.

“[iCapital] is the number one brokerage firm for alternative investments in the world,” he said. “The network has offices all over the world.’

As iCapital’s website reads, alternative investments are generally defined “as anything other than a traditional stock or bond.”

“We can break it down and call it the structured product area and the private fund area,” he said. “I was part of morning catchup sales meetings for both groups, so I doubled up and sat in on both meetings. For both groups, we’d go into a board room and our New York office would sit in and there’d be a Zoom with teams from Florida, Lisbon, Portugal, London, Toronto, Delray and we’d all be in the room together talking about market updates, sale updates and what we should and shouldn’t be doing.”

Betlow was actually the only intern in the New York office. He got into the office around 7:30 am every day, leaving around 6 or 6:30 pm

“So it was an 11-hour day most times,” he said. “I really got the exposure to all parts of the firm, whether that be engineering, marketing, private equity, private credit, hedge fund business and more.”

A connection of Betlow’s led to the opportunity.

“My father has a good friend and ex-colleague by the name of Marc Paley, who happened to be a Lehigh alum,” said Jake. “The fact that I go to Lehigh and play a sport also probably helped in the process. I did well enough in the interview where he gave me the opportunity to be their only intern.”

Betlow may have been an intern this summer, but he didn’t forget about his basketball responsibilities, either.

“I was on campus until June 6 before departing for the internship,” he said. “I did two weeks of training with the team and did the mountain challenge with them. I wanted to be there because of the relationships I was able to cultivate with my now first-years in such a short period of time. It was crucial… very crucial. I wanted them to respect who I am as a player, person, brother and teammate.”

In fact, as Betlow continued, “I am very much dependent on the relationships with my teammates. It’s my favorite part about being at Lehigh.”

Another great aspect of Lehigh is relationships built from the alumni network spanning many years and even decades. This summer, Betlow connected with former Mountain Hawk Zahir Carrington ’10, who lives in New York City.

“Zahir invited me to play in what’s called the corporate league,” said Betlow. “I met some of his really good friends, great guys, so I played with Z on Tuesday nights, doing my best to stay in shape and stay solid.”

Betlow continued to foster relationships (and a competitive atmosphere) with his teammates, even from afar.

“It was a grind,” said Betlow. “They’d be sending videos of practice. I kept my teammates updated. If something cool happened on the trading floor, I’d want them to know about it.”

Betlow’s entire summer was extremely rewarding, and should pay both short and long-term dividends.

“It’s neat to be in the middle, like as a broker between the banks and clients,” said Betlow. “I got to talk to and meet a lot of people, and develop skills that Division I student-athletes should develop as they cultivate their relationships through a four-year period.

“Whether this is what I’m going to be doing after college or it’s not, I believe this prepared me for any position and any city,” Betlow continued. “You come from New York and you want to work in you name it – Boston, Chicago, Charlotte, Austin – I promise you it’s not New York, that’s for sure. The speed and intensity of the city is something that will definitely prepare you for anything that comes next.”

Today, Betlow is back at Lehigh for his senior year with a different perspective

“I believe I came back to school a much more experienced and knowledgeable young man, and someone who has been through the ringer a little bit in a different way,” he said. “We’ve all been through the ringer physically during conditioning, the mountain challenge and our lifts. But It’s a different type of ringer when someone gives you a project on day one and you have no idea the vocabulary they were even talking about. And then you have to ask 10 questions on the first day to three or four older men and women who have never seen you, and also have 20 other things to do.”

Betlow was mentored by experienced professionals at iCapital and now, in many ways, Betlow is returning the favor as a Student-Athlete Mentor for the second year.

“Outside of basketball, being a SAM has been the best experience I’ve had at Lehigh,” he said. “I couldn’t wait to share what I learned this summer with the first-years and fellow SAMs.”

When Betlow returned to campus in mid-August, he undoubtedly did so as a stronger mentor, student, athlete and person because of his iCapital experience. All while balancing basketball responsibilities (which continue into the summer).

“The coaches were super supportive,” said Betlow. “They want what’s best for me and they knew I was going to do my best to stay in shape – basketball wise, physical wise, mentally – and be ready to compete in the school year ahead.”

That, he certainly is.