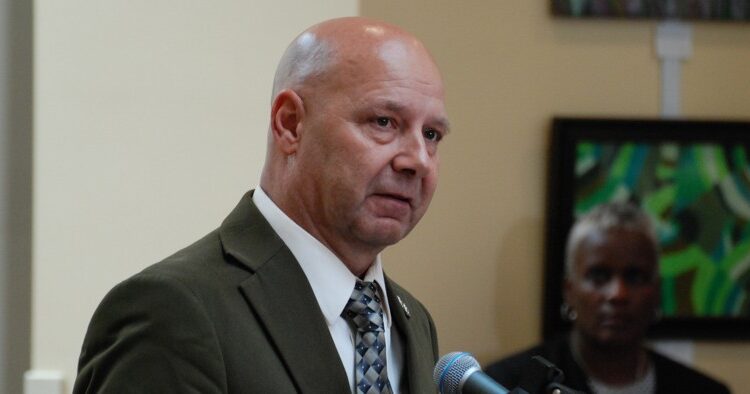 WASHINGTON — With two months left of the 2022 campaign season, a majority of Republican candidates are continuing to skirt away from not only talking to local and national media outlets about their policy issues, but their own constituents, leaving voters with little information on their policy positions.

“If we are to hold our elected officials accountable on their policy stance(s), we have to know what they are,” said Nicholas Valentino, a political science and research professor in the Center for Political Studies at the University of Michigan.

The relationship between the press and politicians has always had some amount of contention, throughout Republican and Democratic-controlled congressional terms and White House administrations.

But the refusal to talk to journalists and barring them from covering political events that would inform voters of their policy positions — as Pennsylvania Republican gubernatorial nominee Doug Mastriano does — has gotten worse over the years, and it’s showing up in local elections.

“If you can undermine the credibility of the press, then you can also absolve yourself the responsibility to speak to the press, and we’ve seen a dramatic increase in the United States in that kind of behavior,” Valentino said.

He said it’s a trend that worries experts who study democratic stability not only in the United States, but across the world.

“One of the key indicators of democratic backsliding is our restriction of information to the free press and an unwillingness to speak to the press,” Valentino said.

Debates are off the table too

It’s not just the media that Republican candidates are opting out of speaking to, it’s their own constituents. In Iowa, Republicans such as Gov. Kim Reynolds, U.S. Sen. Chuck Grassley and U.S. Reps. Randy Feenstra, Ashley Hinson and Mariannette Miller-Meeks skipped an Iowa State Fair tradition – the Des Moines Register Political Soapbox where candidates talk to the public about where they stand on the issues. The only Republicans who spoke were those challenging Democratic incumbents.

A majority of Republican candidates are also refusing to debate their Democratic opponents. Republican Ohio Gov. Mike DeWine refused to debate Republican challengers in the primary and now has said he will not debate his Democratic challenger, former Dayton mayor Nan Whaley.

In Nebraska, GOP governor candidate Jim Pillen also refuses to debate his Democratic challenger, State Sen. Carol Blood. If elected, Pillen would become Nebraska’s first governor since at least the 1970s to be elected without facing his opponents on a debate stage. (Nebraska U.S. Rep. Don Bacon, on the other hand, will participate in two debates and recently tweeted “I love debates.”)

And in a closely watched Georgia U.S. Senate race, Republican candidate Herschel Walker has yet to hold a public debate with Democratic Sen. Raphael Warnock, who became Georgia’s first Black U.S. senator after a special election in January of last year. Walker has challenged Warnock to several debates, which Warnock agreed to, but Walker has backed out of those debates.

Walker has agreed to an Oct. 14 debate hosted by Nexstar Media Group. Warnock has not agreed to the debate, and refused to answer the question when asked by a reporter from the Ledger-Enquirer.

Warnock’s campaign responded to States Newsroom, but did not answer if he would attend the Oct. 14 debate.

“How can we expect Herschel Walker to stand up for Georgians in the Senate if he refuses to debate on stage?” Warnock wrote on Twitter on Tuesday.

Walker has also frequently put restrictions on local press, opting to release statements to conservative outlets like Fox News instead.

Not all Republican candidates are declining debate invitations. For instance, Republican Kansas Attorney General Derek Schmidt, who is running for governor, has agreed to debate Democratic Gov. Laura Kelly. Schmidt, however, waited three months after announcing his running mate before holding his first press conference.

And a few Democratic candidates have been criticized for turning down invitations.

In Pennsylvania, Democratic Senate candidate John Fetterman has largely stayed away from interviews and accepting debate invitations for weeks following a stroke in May. His campaign has largely run on memes, attacking his GOP U.S. Senate nominee Mehmet Oz for being a New Jersey resident.

Oz has agreed to attend what would be the first televised debate for the race, hosted by Pittsburgh’s KDKA-TV, on Sept. 6.

And in Maryland, Democratic candidate Wes Moore and Republican candidate Dan Cox were invited to a Sept. 27 gubernatorial forum by Morgan State University’s student-run news publication. Cox accepted, but Moore declined, with his spokesman saying Moore did not want to “elevate the dangerous views” of his challenger.

The rise of partisanship voting

When political candidates refuse to step on the debate stage to either defend or explain their policy position, it makes it difficult for voters to be informed on what their representatives are doing, Valentino said.

“One of the major discoveries in political psychology over the last 50 or 60 years, which is that in fact, it is highly rare and difficult for constituencies to hold their elected officials accountable,” he said.

And when voters don’t have a clear idea of policy values a candidate holds, then their votes become more partisan, said Daniel Hopkins, a political science professor in the Department of Political Science at the University of Pennsylvania.

“Voters, when they go to the polls, have a lot of information about national politics, and very little information about state and local politics,” he said. “There have been a whole set of very compelling studies in recent years, showing that when local newspapers go out of business, voters then tend to vote in more partisan ways.”

Voting based on party affiliation alone, is also a shift away from American democratic norms, Hopkins added.

“The reason that we ask voters to vote on all of these specific candidates, rather than just voting for a party, is because of the idea that the candidate matters, that candidates can take different positions, that these individuals are not just functionaries of their parties,” he said. “And so if voters are increasingly just joining the party line, that does pose a real tension with the way that we conduct our elections, which asks people to develop opinions about so many different political actors.”

“They have less information, and so they’re going to stick with their partisanship,” Hopkins said.

Attacks on the press as strategy

Over the last several years, Hopkins said polarization has increased and certain Republican candidates have been “abandoning the idea that the news media can be a neutral outlet.”

The Trump administration also frequently attacked media outlets and barred them from press briefings and threatened to take away their White House press credentials. And in 2017, Guardian reporter Ben Jacobs was physically assaulted by U.S. House Montana-at large Republican candidate Greg Gianforte, while asking him a question about health care.

Gianforte won the special election and is currently the governor of Montana.

In Pennsylvania, Mastriano, the Republican gubernatorial nominee, does not respond to questions from local newspaper, digital or television reporters, preferring to get his message out through stump speeches to small crowds and conservative talk radio appearances.

At a recent campaign event, held at a private business, reporters were told to remain in a small, roped off area out of sight and earshot of the parking lot where Mastriano spoke. At another tour stop later the same day, reporters were not stopped from entering the pub where Mastriano addressed reporters, but he accused media of promoting a “propaganda piece” from the state teachers’ union and promised exclusive access to “an honest journalist.”

The Republican National Committee this year voted unanimously to withdraw from the Commission on Presidential Debates ahead of the 2024 presidential election, arguing that it would not be a fair debate. The commission is a nonpartisan organization that has sponsored president and vice president debates since the ’80s and has Republican and Democratic membership.

“The Commission on Presidential Debates is biased and has refused to enact simple and common sense reforms to help ensure fair debates including hosting debates before voting begins and selecting moderators who have never worked for candidates on the debate stage,” RNC Chair Ronna McDaniel said in a statement.

“It has come to my attention that some liberal media activists are mad because they aren’t allowed into #SunshineSummit this weekend,” she wrote. “My message to them is to try crying about it. Then go to kickboxing and have a margarita. And write the same hit piece you were gonna write anyway.”

Republican Alaskan candidate Sarah Palin also avoided talking to the press during the special election to finish the term of the state’s only member of Congress, Rep. Don Young, who died in March.

However, Palin did answer a survey response by the Alaskan Beacon about her various policy stances such as abortion (she doesn’t believe in codifying Roe. v. Wade), the validity of the 2020 presidential election (she believes the falsehood that former President Donald Trump won the election) and marijuana legalization (she believes it should be legal), among other issues.

She lost against Democratic candidate Mary Peltola after rank choice votes were announced Wednesday night. Peltola will become the first woman to represent Alaska in the U.S. House of Representatives, and the first Alaska Native ever to serve in Congress.

But shutting the press out isn’t the only concern that a democratic country is backsliding, Valentino said. The passage of strict voting laws – a trend among Republican state-controlled legislatures since the 2020 presidential election – and the denying of valid elections are some of the more egregious trends of eroding democracy.

Many 2020 election deniers have been nominated as GOP candidates for governor in four critical swing states – Arizona, Pennsylvania, Michigan and Wisconsin.

Valentino said if election deniers started overturning elections, “that would ironically be one of the first major indications of election fraud occurring on behalf of the party that’s been accusing the other side of election fraud for years now.”

“That in some ways, most scholars would say, is far more serious than attacks on the press, because it would mean that you were actually taking votes that had been cast, and throwing them out,” he said.

Why should we still read (and write like) Orwell? | Opinion