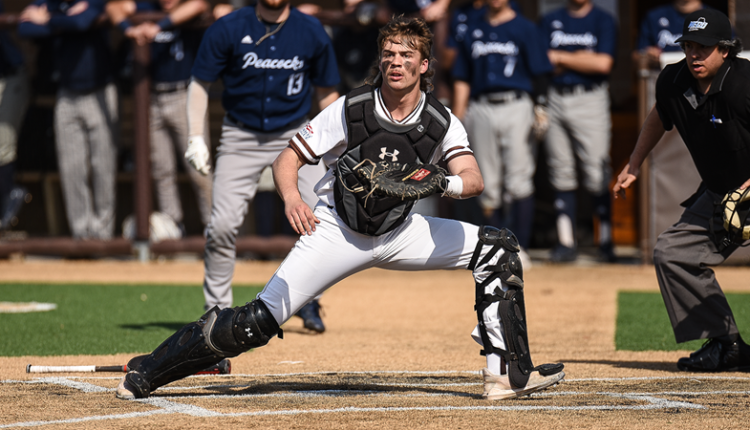 BETHLEHEM, Pa. – First-year Justin Butler went 4-for-6 with two home runs, a double and five RBIs and the Lehigh offense slugged five home runs, totaling 19 runs on 17 hits in a 19-6 win over Saint Peter’s Wednesday afternoon in a warm and sunny home opener at J. David Walker Field. In back-to-back games, the Mountain Hawks (8-6) tallied at least 15 runs, totaling 34 in 18 innings in a two-day span. The win is Lehigh’s second straight, getting the victory in four of its last five outings

In addition to Butler’s career day, Casey Rother, Adam Retzbach and Rafe Perich each produced homers in the win, while the four of them and Jake Whitlinger finished with multi-hit games. All nine members of the Mountain Hawk starting lineup tallied a mark in the hit column, while first-year Andrew Kohl picked up a hit off the bench in his only plate appearance.

“We knew our offense was going to be a strength of ours,” said head coach Sean Leary. “I don’t think you could predict putting up 30-plus runs [in back-to-back days], but to be honest, the guys have been swinging it well ever since VMI. We hit five home runs down there against some really quality arms and they carried it back up here. There haven’t been many cheap balls flying over the fence, they’ve all been driven.

“And I liked our approach today. I thought we worked well with two strikes and kept pressure on them and scored in seven of the eight innings, which was one of our goals today, to be effective in every inning.”

Sophomore right-hander Teddy Tolliver (1-0) pitched 2.2 shutout innings of relief to earn his first career victory, while the combination of first-years Marcus Danchision and Perich shut the door in the final three innings allowing no hits and no runs with four strikeouts.

“I think one of the things about our sophomore class is that they haven’t really gotten a chance to compete very much in the last two years,” Leary said. “Some of those guys are still working through that adrenaline rush or just getting out there and competing. We didn’t control the zone for nine innings, but I thought a great job with Teddy [Tolliver]Marcus [Danchision] and then Rafe [Perich]who was just outstanding in the ninth inning.

“Those guys came in and they pounded the ball well in the zone. We catch the ball pretty well behind us, but even the guys who struggled are learning. We need them to get that experience, those four game weekends, those guys are going to need to get us some critical outs.”

Against Lehigh starter Ben Christian, Saint Peter’s scored the first run of the game in the top of the first inning after Jack Eichler reached on a fielder’s choice and Collin Jensen scored on an error, but the Mountain Hawks struggled together an impressive first and second innings led by the extra base hits after Rother tied the game in the first inning on a groundout to second base to score Whitlinger. An RBI double to left center off the bat of Tyler Young and a two-RBI double from Whitlinger extended Lehigh’s lead to 4-1.

— Lehigh Baseball (@LehighBaseball) March 16, 2022 The Peacocks put a four-spot on the scoreboard in the top of the fourth inning after Chris Marquart homered to right field, a two-run shot that brought Saint Peter’s back within one run at 4-3 Back-to-back walks with the bases loaded allowed the Peacocks to regain the lead at 5-4.

In the very next half inning, following a long top of the frame that lasted nearly 30 minutes, the Mountain Hawks batted around in the inning to hang seven runs and take an 11-5 lead. Lehigh hit back-to-back jacks for the second time this season after Rother and Retzbach both sent one to left field, scoring a total of three runs to take back the lead. Perich singled up the middle on an 0-1 count and a six-pitch at-bat for Butler resulted in his first home run of the game, a two-run shot to left field to take a 9-5 lead. After Riley Davis and Tyler both drew one-out walks, Drew Morse singled to right field, scoring Davis to take a 10-5 advantage. With two outs, Gerard Sweeney singled through the right side to score Young and go up by six.

Tolliver, who came into the game in the fourth inning in relief of Najir Glenn, shut down the Saint Peter’s bats 1-2-3 in the top half of the fifth inning. Retzbach led off the bottom of the fifth with a triple to center field and Perich drove him in with a homer to center on a 2-0 count, taking a 13-5 lead.

With two outs and one on courtesy of Whitlinger’s four-pitch walk, Rother singled a scorcher to center field to tack on another, leading 14-5.

Leary made a series of defensive adjustments in the top of the seventh inning, seeing Kohl come in to play right field, Sam Holtz over to second and Rother replacing Sweeney at first base as Lucas Rich saw action on the mound for the first time this year . Rich walked the first two batters he faced, which brought in Danchision, who hit the first batter, but the next hitter grounded into a double play (which scored a run) and struck out the next batter swinging.

Getting insurance runs on an already comfortable lead, Rother reached on a fielder’s choice in the eighth inning to score Morse and Retzbach grounded out to shortstop, scoring Whitlinger to take a 17-6 lead. With runners on first and second base and two outs, Butler hit a towering pop-up to left field, which dropped in for a two-run double after the left fielder lost track of the ball, giving the Mountain Hawks a 19-6 cushion .

Perich came in to pitch the ninth inning after a strong day at third base, making his third appearance on the mound so far. He struck out two batters and retired the other via a fly-out to right field to conclude the ballgame.

Butler is putting up some insane numbers through his first 14 career games, despite not yet registering the required amount of plate appearances to appear on either the program’s or Patriot League’s hitting leaderboard. He’s hit a Patriot League-leading five home runs with a batting average of .382 (third in the PL) and a slugging percentage of .912 which ranks first and 15th in the nation. He also finished with 11 total bases against the Peacocks, a number that ranks first in a single-game this season by a Patriot League player.

“It’s pretty amazing what I’ve seen out of him so far,” said Leary. “I’ve been doing this a long time and I’ve never had a first year with five homers at this juncture of his career and some of our best players in Mike Garzillo and Jacen Nalesnik and some of the other guys I’ve talked to didn’t hit home runs until their junior years, power comes last.To see some of our first-years driving the ball and Justin in particular is super exciting.

“I like his approach, he’s just taking good, aggressive swings and certainly we’re excited to have the depth and the length of our lineup with some guys batting sixth and seventh with that kind of power.”

The Mountain Hawks play four straight games at J. David Walker Field this weekend with a four-game series against St. Bonaventure, kicking off Friday at 3 pm against the Bonnies, streamed live on ESPN+ (subscription required).

There wasn’t a whole lot that @SeanLeary13 didn’t like to see today, as the Mountain Hawks’ offense powered five homers for 19 runs on 17 hits against Saint Peter’s in the first game of 2022 at Walker Field. 🗣 pic.twitter.com/BBqGJhR7Ve