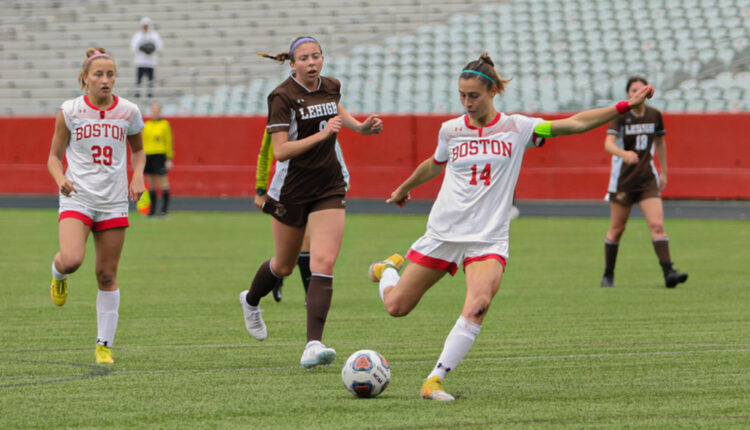 BU graduate forward Amy Thompson during a game against Lehigh University on Oct. 1. The BU Terriers won 1-0 against the American University Eagles this past Saturday, Oct. 8th.
ELIZA NUESTRO/DFP STAFF

“It’s really difficult to win on the road and win on the road at conference games,” head coach Casey Brown said. “(BU) really responded well in the second half, and we really found our brand of soccer and also the level of compete we wanted to have as well.”

Both the Terriers and Eagles went scoreless in the first half, combining for only six total shots. BU’s defense held well throughout those first 45 minutes, allowing only one shot on goal.

Sophomore forward Morgan Fagan scored the Terriers’ only goal in the 58th minute. This is her fourth goal of the season and her team-leading 11th point. Junior forward Abigail McNulty and junior midfielder Lily Matthews came through with assists on Fagan’s goal. Redshirt senior forward Amy Thompson also made her presence known throughout the game, with three shots and a shot on goal.

Around the 80-minute mark, it became dicey as AU graduate student defender Asia Horne headed a corner kick towards the goal. Luckily for the Terriers, it sailed over the crossbar and out of bounds.

The Terriers’ goalkeeper tandem, senior Gretchen Bennett and sophomore Celia Braun, held off the Eagles’ attempts, saving only one goal throughout the entire match. This is the fourth consecutive game where BU did not allow a goal to be scored.

“Both Celia (Braun) and Gretchen (Bennett) have done an awesome job,” Brown said. “We are very happy with the performance of both of them and the options we have, the experience we have.”

BU will look to continue their winning streak on Wednesday as they travel west to Worcester to face off against the College of the Holy Cross.

White and Kahn Honored as Patriot League Players of the Week

If You’re Worried About the Environment, Consider Being Composted When You Die