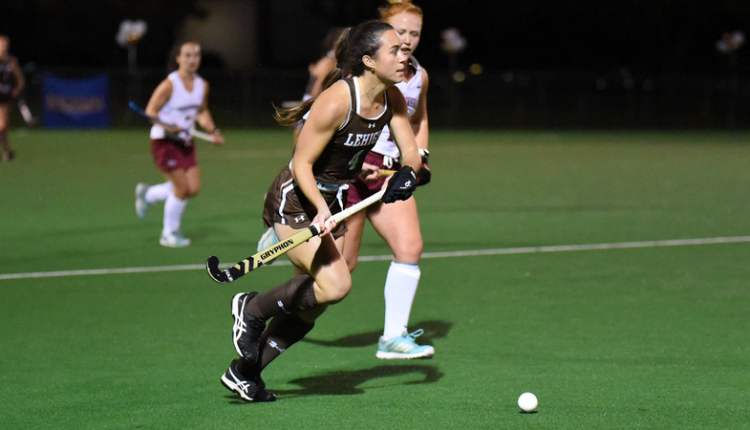 Lehigh has now won four straight games to get to 6-5 overall and 1-1 in Patriot League play.

Brown’s hat trick was the first for a Lehigh player since Lenke Havas scored all three goals in a 3-2 win over Longwood last August. Lehigh’s three-game winning streak over Lafayette is the program’s longest since the Brown and White won four straight in the rivalry from 1983-1985. The Mountain Hawks’ class of 2023 joins the classes of 1985, 1986 and 1987 to post at least three wins over Lafayette in their four-year careers.

“We had a great week of practice,” Lehigh head coach Caitlin Dallmeyer said. “The team was really disciplined. It was a tough weekend, even though we went 2-0 last weekend we pulled a lot of lessons from those games. One of the biggest lessons was that we need to be accountable for our own intensity and energy and not rely on others for it. That was a focal point this week. The team did really well. They held themselves to really high standards. They got themselves really pumped up and focused. We did a lot of scouting so that we would all feel prepared. That feeling of preparation brewed confidence, and we played very confidently tonight.”

Lehigh took the lead on his first shot of the night at 8:21. Senior Sarah Bonthuis dribbled into the circle and ball made its way to Brown, who shot it past Leopard goalkeeper Raffi Fragomeni.

Abbie Brown bats it home to put Lehigh in front!

Lafayette (3-8 overall, 0-3 Patriot League) equalized less than a minute into the second quarter as Josephine van Wijk scored off a corner. The Leopards had a golden opportunity to take the lead after being awarded a penalty stroke in the 19th minute, but Felicitas Hannes hit the post and the game remained tied at 1-1.

The Leopards had a 9-0 edge in shots and a 6-0 advantage in corners in the second quarter alone, but Lehigh managed to stay level thanks to the failed penalty stroke and three Kahn saves.

Brown netted her second of the night 3:32 into the third quarter, capitalizing on a rebound following a flurry of three Lehigh shots.

Third time is the charm for Abbie Brown, who scores her second of the night off a rebound.

“We match up very well with our playing styles,” Dallmeyer said. “We have very similar objectives. We talked about doing it better and making sure we were disciplined and composed. They had some cards that took their players out of the game at times. Our goal was to not get carded but to play composed and disciplined . Fortunately, that worked well for us to maintain that composition throughout the game.”

Sydney Woolston tied the game at 2-2 with a goal 1:29 into the final quarter but Brown was able to answer once more. With 5:20 remaining, sophomore Guusje Hogendoorn played the ball into the circle. It eventually deflected to Brown in front, and Brown put it home for her seventh goal of the season, completing the hat trick to give Lehigh a 3-2 lead.

“Abbie Brown only had three shots and she capitalized on every single opportunity in a pressure moment,” Dallmeyer said. “She’s still relatively new to the forward line and figuring it out. She has played some mid for us too. For her to capitalize on her opportunities, under pressure, in a huge game, is a compliment to her discipline and composure. Abbie has been going up every game and elevating really rapidly. That helps us significantly.”

Lafayette had one more good chance in the final minute, but Kahn denied Lineke Spaans to preserve the victory for the Mountain Hawks.

Shots favored Lafayette by a 20-6 margin and the Leopards also had a 9-2 edge in penalty corners.

The Mountain Hawks are back home Monday night to host Villanova at 6 pm The game will be broadcast on ESPN+.