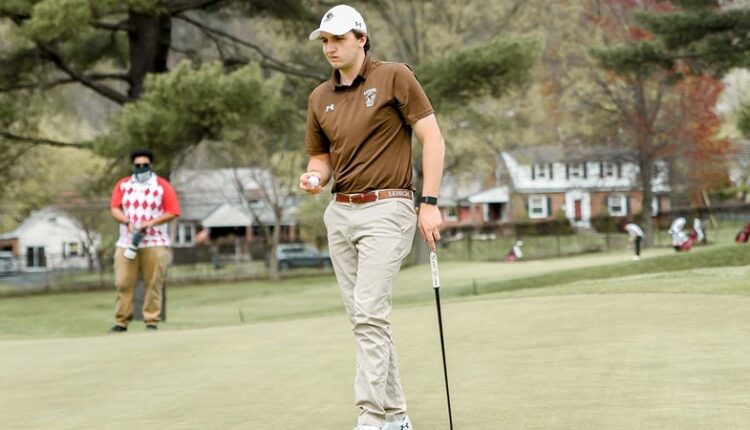 HAMILTON, NY – On the opening day of its fall campaign, the Lehigh men’s golf team turned in a pair of sub-300 rounds Saturday at the Alex Lagowitz Memorial at Colgate’s Seven Oaks Golf Club. Lehigh posted rounds of 298 and 295 to finish day one at 593, good for 11th place in a 14-team field.

Junior Edmund Broderick led the way for the Mountain Hawks Saturday, with rounds of 73 and 71 as he sits in a tie for 13th place at 144. Broderick carded three birdies in his morning round and made five, all of which came on the back nine , in round two.

First-year Jake Roth is in second position among Lehigh players as he is tied for 39th place at 149 (76-73). Roth totaled five birdies, including three in round two.

Senior David Hurly turned in a pair of 75s on Saturday and is tied for 44th place at 150. Hurly made three birdies over his first 36 holes.

Sophomore Aidan Oehrle and first-year Will Caronchi are part of a tie for 61st place at 153. Oehrle totaled four birdies and an eagle in rounds of 77 and 76, while Caronchi carded three birdies.

Seton Hall leads the team standings at 557 behind rounds of 277 and 280. The Pirates lead Yale by seven strokes.