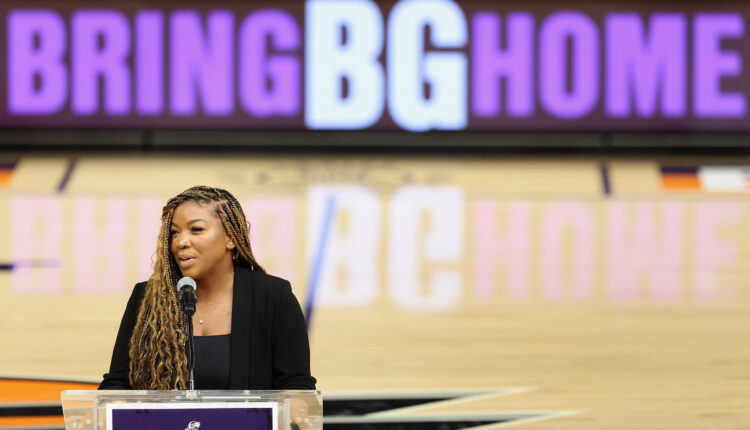 Brittney Griner will be released in about 30 days, not 9 years | Michael Coard

When Brittney Griner, the 31-year-old WNBA Phoenix Mercury All-Star, two-time Olympic gold medalist and seven-year veteran of a Russian women’s basketball club, was sentenced to nine years in prison and fined $16,400 Thursday after kinda-sorta pleading guilty to bringing less than one gram of cannabis oil through the Moscow airport, almost everyone was shocked that she received such a harsh sentence.

She’s not gonna do nine years, or nine months or even nine weeks. Instead, I personally believe – based on the analyses of international political science scholars – that she’s gonna do approximately 30 days or less.

You wanna know why? Here’s why: This case is not about Russian law. It has absolutely nothing to do with that. Instead, it’s all about Russian politics and President Vladimir Putin’s cruel game that turned Griner into a political pawn.

Although Griner has been incarcerated in Russia since her Feb. 17 arrest, international law regarding prisoner swaps doesn’t apply until a person is formally sentenced, which occurred on Aug. 4. Now that that has occurred, the International Prisoner Transfer Program can be utilized.

As noted on the U.S. Department of Justice’s website: Beginning in 1977, the International Prisoner Transfer Program allowed federal officials to negotiate the transfer of prisoners from countries where they’d been convicted and sentenced for crimes, back to their home countries. The transfers could alleviate some of the diplomatic challenges that arise when incarcerating foreign nationals.

“The transfer decision is a discretionary one based on the satisfaction of statutory and treaty requirements and is informed by internal guidelines that are applied to the unique facts of each case,” the DOJ site says.

U.S. Secretary of State Antony Blinken initially refused to comment about Griner’s case, but behind-the-scenes negotiations are obviously ongoing. And he later confirmed that the U.S. had made a “substantial proposal” to Russia for an exchange.

And those comments by Blinken and Rood were made prior to the Aug. 4 sentencing, which obviously means that the backroom negotiations have drastically ratcheted up as a result.

In fact, as pointed out in The Washington Post on Aug. 2, “Russian officials have hinted that there may be a willingness to negotiate a prisoner exchange” after Griner’s trial is over.

And, even before Griner’s Feb. 17 arrest, “President Biden and Putin opened a channel for negotiations on [other] prisoner exchanges after they met last year, according to Russia’s Foreign Ministry.”

As reported by CNN on July 28, “The Biden administration has offered to exchange [55-year-old] Viktor Bout, a convicted Russian arms trafficker serving a 25-year U.S. prison sentence, as part of a potential deal to secure the release of Griner [and former Marine Paul Whelan whom the Russians accused of espionage but who says he was framed] …, according to people briefed on the matter.”

Bout in 2008 was arrested with American cooperation in Thailand on terrorism charges and extradited here two years later.

Furthermore, adds CNN, “Sources told … [the network] that the plan to trade Bout for … Griner received the backing of President Joe Biden after being under discussion since earlier this year. Biden’s support for the swap overrides opposition from the Department of Justice, which is generally against prisoner trades.”

It must be pointed out that Griner is a U.S. athlete and nonviolent defendant who had a minuscule amount of cannabis oil and was convicted by a Russian judicial bureaucratic puppet. Bout, on the other hand, is a Russian spy and ultra-violent international arms dealer known as the “Merchant of Death” who conspired to murder Americans with antiaircraft weapons and was convicted by a New York civilian jury.

They are not the same. So should America fold and give in to this blatantly unfair Russian demand? If it does, won’t that open the door to Russia snatching up more minor American (alleged) offenders and demanding that major Russian mass-murderers be released in exchange?

And I should mention that Griner had been properly prescribed medical marijuana by a licensed physician in America in 2020 to alleviate her documented “severe chronic pain.”

It’s potentially embarrassing for a journalist or columnist to publicly make a bold prediction regarding a political issue, especially a volatile international political issue, because there are so many moving parts and so many things could go wrong.

But based on the analyses of international political science scholars, I’m gonna go out on a limb and say Griner will be home in about 30 days or less.

And my position is strengthened by what a knowledgeable and renowned sports radio and TV host, sistah Joy Taylor, recently said about a 19-year-old American named Audrey Lorber, who in 2019, was convicted in Russia for possessing 19 grams of marijuana. Lorber was released and returned home after having pled guilty and having spent a little over a month in prison.

Yep. About 30 days or less for Griner. I said what I said.

Ask me about it in September.

To prevent shootings, teachers needed to be armed with information, not guns | Opinion