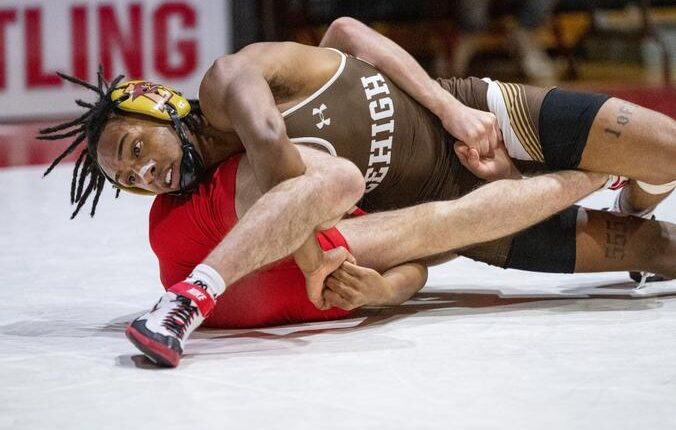 ITHACA, NY – The 100th meeting of meeting between Lehigh and Cornell was another tightly-contested battle. The 20th-ranked Mountain Hawks won four of the final five bouts to claw back from a 15-3 deficit and earn a 5-5 split, but ultimately bonus points helped No. 6 Cornell prevail 18-15 Saturday night at the Friedman Wrestling Center.

The Big Red (5-2) picked up a technical fall from top-ranked Yianni Diakomihalis at 149, his 100th career victory, and a major decision from Julian Ramirez at 165 to establish the final three point margin.

Lehigh (4-6) enjoyed a fast start thanks to sophomore Malyke Hines, who opened the dual with a 4-2 decision over 13th-ranked Vince Cornella at 141. Hines gave up a reversal to open the second period and trailed 2-1 after two, but escaped early in the third. Late in the final period, Hines took a double-leg shot and was able to put Cornella in danger, with the referee initiating the count and then awarding Hines the winning takedown in the final seconds.

Hines with the late TD to take the opening bout!

Cornell took the next four bouts to go up 15-3 at intermission. With senior Josh Humphreys not available Saturday, Lehigh wrestled sophomore Drew Munch at 149 and moved sophomore Max Brignola up to 157. Munch dropped a 16-1 technical fall to Diakomihalis, while Brignola fell 2-0 to Cole Handlovic on a third period escape plus riding time advantage.

Ramirez won a 13-2 major decision over sophomore Luca Frinzi at 165 and Chris Foca followed with a 9-5 win over sophomore Jake Logan at 174. Logan and Foca both had two takedowns in the bout, but Foca prevailed by way of three escapes , a stalling point and riding time.

The Mountain Hawks picked things up in the second half of the dual. At 184, graduate student Tate Samuelson won 6-1 over Ethan Hatcher on the strength of a first period takedown, an escape, two stalling points and riding time.

Third-ranked sophomore Michael Beard defeated No. 17 Jacob Cardenas 6-2 at 197 for Lehigh’s second straight win. Beard conceded the first takedown but answered late in the first period to lead 3-2 after one and never looked back.

First-year heavyweight Nathan Taylor made it three straight wins and brought Lehigh within 15-12 with two bouts remaining, racking up three takedowns in a 9-3 decision over Brendan Furman.

The dual ultimately came down to 125, with senior Jaret Lane battling Brett Ungar. The bout was tied 1-1 after seven minutes, with Lane escaping early in the second and Ungar early in the third. In sudden victory it was Ungar scoring the winning takedown midway through the overtime period to claim the 3-1 decision.

Ungar’s decision allowed Cornell to not wrestle third-ranked Vito Arujau at 133, but needing a pin to send the dual to criteria, sophomore Connor McGonagle could only muster a dominant 4-0 decision over Ethan Fernandez.

Lehigh now leads the all-time series 63-34-3 as Cornell snapped a three-dual winning streak for the Mountain Hawks in the series.

In addition to Humphreys being out for Lehigh and Arujau not wrestling for Cornell, the Big Red were without ranked wrestlers Jonathan Loew (184) and Lewis Fernandes (285).

The Mountain Hawks are back on the mat on Sunday when they visit Binghamton for a 1 pm dual with streaming coverage on ESPN+.