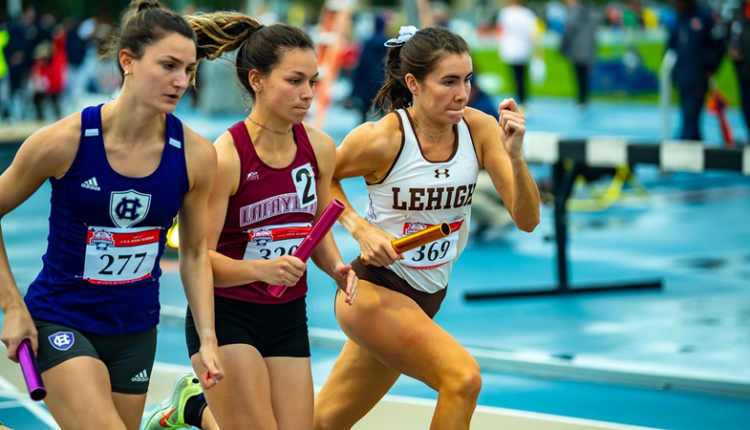 BETHLEHEM, Pa. – Kara Bonner had a senior year many dream of. She was a member of the first-place 4×800 relay, where she secured two Patriot League titles, competed in the 4×800 relay at the ECAC Championship where she secured her third gold medal of the year and most importantly, she received a degree from Lehigh University . While Bonner excelled as an individual on the track, her wisdom, transparency and leadership helped the Lehigh women’s cross country and track and field teams excel as a whole. Bonner’s leadership on and off the track led her to be named the female recipient of the 2021-22 Patriot League Sportsmanship Award, the league announced on Thursday. Bonner and the male recipient, Loyola Maryland cross country and track and field’s Jake Lowler, were selected by the administrators of the League’s Student-Athlete Advisory Committee (SAAC).

Bonner was a member of the Lehigh women’s cross country team for three years (2017-19) and a member of the Lehigh women’s track and field team for four years (2018-20, 2022). The Medford, NJ native has taken on leadership roles since she first started at Lehigh. Her leadership qualities did not go unnoticed by Lehigh Athletics. Bonner was a team captain for the women’s cross country team and was awarded the department’s Sportsmanship Award at the year-end Student-Athlete Awards Convocation in 2022.

“Kara Bonner has used her role as leader of the women’s distance program to serve her teammates, rather than a way to seize power,” said head women’s cross country coach and assistant track and field coach Deb Utesch. “She makes an effort to reach out to the underclassman to check in and see how they’re doing or congratulate them on a great effort in practice or a meet. She’s the teammate who notices the work that others are putting in, and who has more confidence in us than we do in ourselves.

“Ultimately, Kara leads by example,” continued Utesch. “Despite taking a leave of absence from Lehigh to work a full-time position with a company during the 2020-21 school year, Kara trained alone (which is hard!) while balancing her job. She returned to Lehigh the following year, making a smooth transition back into competitions and academics. This demonstrates grit, bravery and trust in herself that I aim to mirror in my own life.”

Since 2019, Bonner has developed her leadership skills in ways that benefited her, on and off the track. During her time at Lehigh, she was a Student-Athlete Mentor (SAM) where she served as a captain. Bonner aided in both recruiting and training student-athletes to mentor incoming first-years. On top of recruiting and training, Bonner took time to meet individually with the incoming first-years to aid them in their transition to Division I athletics.

In January, 2020, Bonner was one of the 12 Lehigh student-athletes to be named to the Flight 45 Executive Board. As a member of the executive board, Bonner had a number of responsibilities, including developing anti-racism curriculum, being a voice for mental health advocacy and promoting various safety precautions during COVID-19.

“In terms of the greater Lehigh Athletics community, Kara is an amazing asset,” said teammate Christina Yakaboski. “She’s faced her share of struggles as an underclassman, and knows that this is common, and she’s passionate about supporting the first-year athletes in any way possible. While walking around campus with her, it’s common for her to stop and say hi to a student-athlete that I don’t know and ask them how they’re doing. After the exchange, she turns to me and says ‘Oh that’s so and so and they’re in my huddle (first-year group).’ ”

Throughout her time at Lehigh, Bonner became an all-encompassing student-athlete. She excelled in both cross country and track and field, participated in various clubs and organizations, all while maintaining great academic standing and excellent in the classroom. During her four years at Lehigh, Bonner consistently made the Patriot League Academic Honor Roll (2018-22) and was named the women’s cross country team Scholar-Athlete Award winner in December, 2021.

“Kara excelled in the classroom and on the course and track, working hard in all aspects of her life, which motivated her teammates to do the same,” said Utesch. “These examples show her dedication to the team-first mentality; she leads by example, has started team traditions that empower her teammates and lets her teammates know they are valued.”

How hot is too hot for the human body? These Penn State experts explain | Opinion