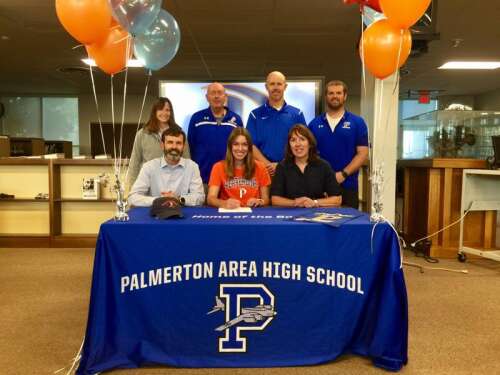 Emma Martinez saw how special the day was for her brother Jake and sister Madison.

She wanted nothing more than to experience it herself.

Martinez got that opportunity recently during a Signing Day ceremony at Palmerton, where the senior announced she will further her academic and athletic careers at Division 1 Pepperdine University and participate in both cross country and track and field.

“I’m super grateful for this to happen,” said Emma. “But I had to work hard for it. My brother and sister had this about four years ago, so I saw them and they’re my biggest role models. So seeing them I knew that this is what I wanted to work for in the end.”

Like her brother and sister, Emma has thrived athletically and academically at Palmerton. While she will be focusing on cross country and track and field at Pepperdine, Martinez has also been a standout soccer player for the Bombers – Colonial League champions this fall – during her high school career.

“So I’ve played soccer my whole life and I love soccer, but at the end of the day running is my greatest passion, mostly because of my family; we’re a family of runners,” said Emma, ​​whose brother Jake went to Lehigh University and sister Madison went to Ithaca College. “So I knew that’s what I wanted to do in college.”

And she knew Pepperdine, overlooking the Pacific Ocean and the Pacific Coast Highway near Malibu, California, what the place to do it.

“I looked at schools that fit me academically,” said Martinez, who also considered the University of Hawaii and Loyola Marymount University (California). “And with the programs that they have internationally – I want to study broadcast journalism, and they have a great program there, so it fit me academically. And when I saw the track team, I knew I could fit in there. I got to visit the school officially in October and when I met the people there, I just fell in love with it.”

Emma has had plenty of good examples to follow during her journey.

“Definitely my parents,” she said of her mom Melissa and dad Michael. “They’re the ones who got me running; there’s pictures of me running as soon as I could. At a competitive level, definitely my brother and sister. They both compete at a high level in college for track and field. So just being able to talk to them about their athletic and academic experience and what comes with being a student athlete, they’ve been my biggest inspirations there.”

Martinez had her freshman track and field season canceled due to the coronavirus pandemic, and her sophomore campaign was derailed by injury.

In her junior track and field season, Martinez was a captain and the team’s third-leading point scorer.

While she focused primarily on soccer in the fall, Martinez took part in cross country in seventh and eighth grade and when she could as a freshman.

“It’s a lot of years and a lot of work,” said Palmerton distance coach Fran Gough. “You don’t realize how many miles and how much time gets you to this point. She started working out with me when she was in the seventh grade. You think about all the stuff that we did from the workouts, starting in January, February, all year, the different types of workouts over all the years, and it’s a nice culmination to see these end results of where these kids end up.

“She had a really nice year last season and I’m really looking forward to this year. I’m really psyched about this year. We’ve got a good core of kids coming back on the distance side, which should make it pretty exciting. It will be neat seeing her, just the culmination of more work to see where she’s going to end up before I get to send her off to Pepperdine. I think she’ll be in great shape for college running, she’s definitely going to be in a good place for college running.”

“Even beyond athletics, she’s just a great person,” said Bombers’ head coach Mike Gombert. “She really is. She’s the epitome of team captain; she’s everything that we as a coaching staff would expect from our captains, and she’s very deserving of what she’s getting here today.”

Palmerton’s Emma Martinez (seated in middle) recently signed a letter of intent to attend Pepperdine University for cross country and track and field. With Martinez, in the front row, are her parents Michael and Melissa Martinez. In the back row, from left, are principal Paula Husar, track and field assistant coach Fran Gough, track and field head coach Mike Gombert and athletic director Kyle Porembo. PATRICK MATSINKO/TIMES NEWS