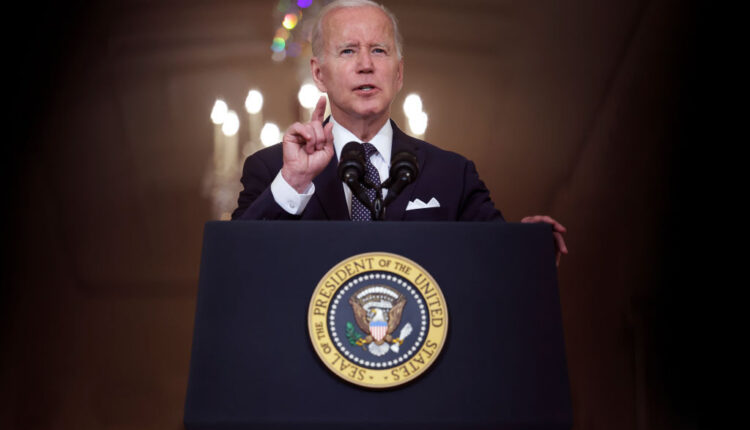 “This isn’t about taking away anyone’s rights. This is about protecting children,” Biden said. “How much more carnage are we willing to accept?”

The plea came after a White supremacist killed 10 Black people at a supermarket in a predominantly Black neighborhood in Buffalo, New York, on May 14.

Ten days later, an elementary school in Uvalde, Texas, was attacked by an 18-year-old man armed with a rifle and 19 children and two teachers were killed. Another mass shooting at a hospital in Tulsa, Oklahoma, on Wednesday night left four dead.

He also expressed his support for laws that would safely store guns in homes where children live, and for an end to the liability shield that prevents civil lawsuits from being brought against gun manufacturers.

What gun control proposals will the U.S. House consider? Here’s the list

“The gun industry special protections are outrageous,” Biden said. “It must end.”

Firearm related injuries are now the leading cause of death for children and adolescents in the United States, according to the New England Journal of Medicine.

At the same time Biden spoke at the White House, the U.S. House Judiciary Committee passed a gun control package on a party-line vote, 25-19, following a heated all-day markup called on an emergency basis by Democrats after the recent spate of gun violence. Both the House and Senate are in recess.

The legislation, H.R. 7910, known as the Protecting Our Kids Act, is made up of eight bills related to gun control, all first introduced in 2021 by Democratic lawmakers. It’s expected to be on the House floor next week.

While the legislation is expected to pass a Democrat-controlled House, it’s unlikely to advance in the evenly divided Senate, where a small bipartisan group of senators is discussing more limited measures.

The House gun control package would raise the age of purchasing semiautomatic rifles from 18 to 21, create new requirements for storing guns in a home with children, prevent gun trafficking, require all firearms to be traceable and close the loophole on bump stocks, devices that increase the rate of fire of semiautomatic weapons, among other things.

Republicans on the committee raised repeated objections to the bill, blaming mental health problems and a lack of “family values” as the reasons for the recent mass shootings. They criticized Democrats for rushing to pass legislation.

“This is no rush action,” Rep. Steve Cohen, D-Tenn., responded. “This has been delayed for decades.”

He said all the provisions in the bill should be law today. Cohen added that assault weapons, which are typically used in mass shootings, were banned from 1994 until the law expired in 2004.

Republicans submitted 10 amendments to the bill. Only one was accepted, by Republican Rep. Thomas Massie of Kentucky.

The amendment would require the attorney general to submit a report to the House and Senate Judiciary committees and to collect “the demographic data of persons who were determined to be ineligible to purchase a firearm based on a background check performed by the National Instant Criminal Background Check System, including race, ethnicity, national origin, sex, gender, age, disability, average annual income, and English language proficiency, if available.”

Even while House members fought over gun control, more gun violence broke out in Wisconsin, where two people were shot while attending a funeral.

“As we sit here, there are multiple shots near Racine, Wisconsin,” Rep. Sheila Jackson Lee, a Texas Democrat, said. “It is obscene, one mass shooting after another.”

Jamie Raskin, a Maryland Democrat, said mass shootings did not start with Buffalo. He argued that Congress has had since the Columbine shooting in Colorado in 1999 to do something about gun control.

But Rep. Chip Roy, R-Texas, called the markup a “crap proceeding,” saying Republicans did not have enough time to prepare. He said that the goal of Democrats was to “disarm the American people.”

McBath, who became a gun safety advocate after her son Jordan was shot and killed, argued about so-called red flag laws with Florida Republican Rep. Matt Gaetz. Red flag laws allow the courts or law enforcement to temporarily remove a firearm from an individual who is adjudged to pose a threat to themselves or others.

Gaetz submitted an amendment to insert a line into the bill that affirms that “Congress disfavors the enactment of laws that authorize a court to issue an extreme risk protection order, also known as Red Flag laws, in the States because such laws trample on an individual’s due process and Second Amendment rights.”

But McBath said that there is support for red flag laws, including from law enforcement, because they are tools to temporarily remove firearms from people in distress.

“Don’t you dare try to tout that red flag laws don’t count,” McBath said, arguing that without the laws, many people’s hands are tied when they want to remove a firearm from a loved one.

Rep. Cliff Bentz, an Oregon Republican, said that the bills before the committee would not immediately end school shootings.

“Each one of these will not help now,” he said. “These things will be challenged (in the courts) and nothing will happen for these kids.”

He criticized Democrats for not reaching out to Republicans to work on bipartisan legislation.

Rep. Greg Steube, a Florida Republican, who participated in the markup virtually, brandished several of his guns and argued that they would be banned under the proposed laws in the legislative package.

“I hope the gun is not loaded,” Jackson Lee said.

“I’m at my house, I can do whatever I want with my guns,” Steube said.

The chair of the Judiciary Committee, Jerry Nadler, D-N.Y., asked Steube if he would answer questions, which he declined.

Tiffany accused Democrats of trying to repeal the Second Amendment, and would not engage with his Democratic colleagues who tried to debate him

U.S. Rep. Madeleine Dean, D-4th District., said she was horrified by the rhetoric from Republicans on the committee and said that they were more concerned with protecting guns than with the victims of gun violence.

“Where is the outrage over the slaughter of 19 kids and two school teachers?” she said.

Dean said that the Second Amendment has been idolized by Republicans.

“Do you think the founding fathers were picturing AR style weapons?” she said.

GOP lawmakers like Gaetz and Tom McClintock of California argued that gun free zones were actually dangerous and that guns should be allowed on school grounds, so armed law enforcement could protect students.

Rep. Steve Chabot, an Ohio Republican, said that what lawmakers could do immediately is work to make schools safer, such as using funds to hire more resource officers and install metal detectors in schools.

“That’s one area where we could be working for common ground,” he said.

Separately, House Speaker Nancy Pelosi said the House will take up a bill to ban assault rifles sometime next week, when lawmakers return from recess.

While it will likely pass the House, it has no chance of getting through an evenly divided Senate, where the legislation would need 10 Republicans to join all Democrats to advance.

“As we go down this path, it is our responsibility to keep gun violence front and center in the media so that, strengthened by public opinion, we can get life-saving legislation over the finish line,” Pelosi said in a statement.

“To all those in the Congress who would stand in the way of saving lives: your political survival is insignificant compared to the survival of our children.  We will not rest until the job is done.”

Pelosi said the House will also vote on Rep. David Cicilline’s  Active Shooter Alert Act, or H.R. 6538, which creates a notification alert system during a mass shooting. The bill by the Rhode Island Democrat has 14 Republican co-sponsors.

None of the bills debated in the House Judiciary markup would ban assault-style weapons, which were used in the New York, Texas and Oklahoma shootings. Pelosi said a hearing on an assault weapons ban will be held, but did not set a date.

Jackson Lee said that Democrats “are not done” and that there needs to be a ban on assault weapons.

But the top Republican on the committee, Jim Jordan of Ohio, said the emergency markup seemed “more of political theater,” and “is not a real attempt, in my judgment, to solve solutions.”

Jordan said that the gun control package is a radical attempt to enact federal control over “law-abiding citizens.”

“Blaming the gun for what is happening in America is small-minded,” Rep. Ken Buck, a Colorado Republican, said.