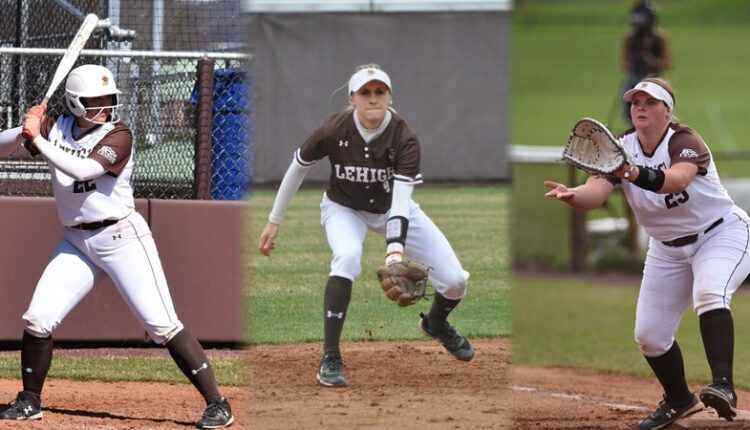 The All-Patriot League teams and major award winners are voted on by the league’s head coaches.

Barjaktarovich started 42 of Lehigh’s 44 games at shortstop and also serves as Lehigh’s leadoff hitter. She made just three errors in 141 chances for a .979 fielding percentage, with 68 putouts and 70 assists. With her two Defensive Player of the Year awards and the two won by Alexis Watanabe ’16 (2014 and 2016), Lehigh players have now won four of the eight Defensive Player of the Year awards since its inception in 2014.

In addition to her major award, Barjaktarovich earned first team all-league honors at the at-large position after earning second team honors in 2021. Barjaktarovich is batting a team-best .393 and leads the Mountain Hawks with 55 hits, 33 runs scored and 23 stolen bases. In Patriot League play, Barjaktarovich hit .453 with 29 hits and 15 runs scored.

Chesson is now a three-time first-team All-Patriot League selection. One of the most prolific run producers in program history, Chesson became Lehigh’s career home run leader earlier this season (she now has 32) and currently leads the Patriot League with 12 home runs and a .674 slugging percentage to go along with a .349 batting average and 40 runs batted in.

Kittel earned her first career all-league honor with a terrible senior campaign. She is batting .275 in 35 games and has established career highs with seven home runs and 26 RBIs. Kittel has been especially strong during the Patriot League season with four home runs and 14 RBIs in 18 games to go along with a .291 batting average.

O’Rourke earned second team honors at second base for the second consecutive season. One of two Mountain Hawks to start all 44 games, O’Rourke started 41 games at second base before moving to third base for last weekend’s series at Boston University. She is hitting .293 with 20 runs scored and 26 RBIs, while adding excellent defense (just three errors in 120 chances).

Cimino made a postseason all-league team for the first time. Lehigh’s left fielder is hitting .378 through 42 games with 22 of her 54 hits going for extra bases, including 14 doubles. She has driven in 31 runs to rank second on the team. Cimino has been extra tough in Patriot League games where she batted .385 with 10 extra-base hits, including three home runs, and 17 RBIs.

Lehigh (26-17-1, 15-3 PL) will be the No. 2 seed in the Patriot League Tournament and will open tournament play against No. 3 Army West Point, Thursday at 2:30 pm at BU Softball Field in Boston. Top seed Boston University wants to host No. 4 Colgate in the tournament’s first game at noon. Friday’s second day of tournament play will feature games at 11 am, 1:30 pm and 4 pm, with the championship round set for Saturday at noon. All Patriot League Tournament action will be broadcast on ESPN+.

Pandora’s Box: Overturning Roe is only the beginning of the threats to women | Opinion