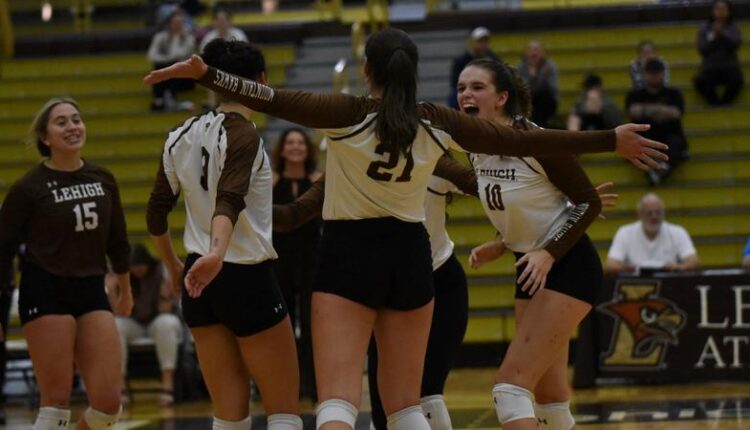 “After a little bump in the road last week, we came back this week looking to be a little more disciplined on some things that we needed to be,” Lehigh head coach Alexa Keckler said. “The players have been pushing themselves and to see that come out tonight with the full energy that we’re asking for and the effort. That’s probably the best defensive game we’ve played in a while. Our blocking and our back row defense were on. It was great to see the hard work and the results from the things we’ve been asking them to this week, show up and work on the court. The players were bought in and did that, and tonight was the result.”

Following a 1-1 tie in the first set, Lehigh reeled off four straight points to never trail again in the frame. A kill by Schulte put Lehigh up by as many as six at 19-13. Loyola battled back within three late, but kills by McCartney and sophomore Emily Stewart cemented a 25-21 win.

“Madison has been working extremely hard in practice,” Keckler said. “She’s so fundamentally sound in her game. To put her in and get some great swings, and even from the service line she did an excellent job. It was a great match for her and it was nice for us to see that out of her and for her to experience that.”

Set two was Lehigh’s most dominant of the night. The Mountain Hawks built leads of 7-1, 9-2 and 13-3 before the Greyhounds burned a timeout. Loyola hit -0.167 in the second with Lehigh registering six blocks in the set. A solo block by junior Lylah Washington gave Lehigh his largest lead at 21-7 and the Mountain Hawks went on to claim the set 25-13 to take a 2-0 lead in the match.

Lehigh used a 5-1 run to break a 4-4 tie in set three. Loyola battled back to tie the set at 10-10 but the Mountain Hawks reeled off seven of the next eight points to go up 17-11. A double block by Washington and Stewart put Lehigh up 19-12 and Loyola would get no closer than six points the rest of the way. A kill from first-year Natalie Luscomb wrapped up a 25-18 set win and a 3-0 sweep.

“That’s been our season to some extent, where we’ve had two pieces on maybe not somewhere else,” Keckler said. “Tonight, everyone was producing at the level that we have known that they can. That was a really excellent performance by our team. They did a really great job, playing for each other and picking each other up was pretty cool to see.”

A Pa. prison got a Scandinavian-style makeover. Here’s what happened next | Analysis